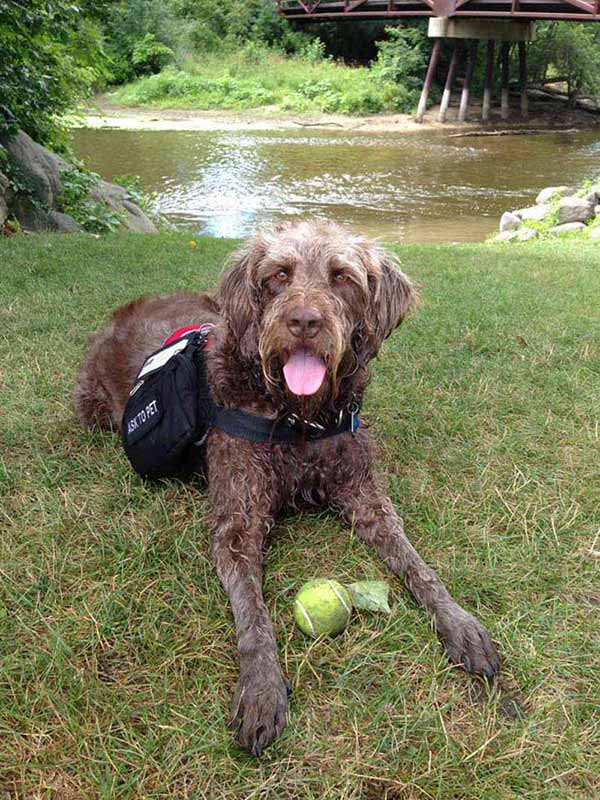 When the 2014 winners of the AKC Humane Fund Awards of Canine Excellence (ACE) were presented at the AKC/Eukanuba National Championships, the roll call included a former shelter dog who almost lost his life and a military veteran who nearly took his own life. Gander is the first mixed-breed dog to win an ACE award. He won first place in the Service Dog category for his incredible service to his owner Lon Hodge who suffers from Post-Traumatic Stress Disorder. Read on to learn about their story and work to help all veterans-in-need receive their own service dog:

Gander landed in a shelter because his young owner could not afford to feed him. The gawky adolescent had passed his cute fuzzy puppy stage and potential adopters passed by him. The shelter soon labeled him as unadoptable, and he was placed on “death row.”

Nearly a thousand miles away, Lon Hodge was fighting for his life. The Vietnam Veteran had suffered from night terror and panic attacks for years as a result of Post-Traumatic Stress Disorder (PTSD). Some days, he wondered if life was worth the pain.

This is the story of how Gander and Lon found each other and saved each other’s lives – and today help save thousands of others. The great work of Gander, now a certified service dog, earned him the 2014 AKC Humane Fund’s Award of Canine Excellence (ACE). The Labrador-Poodle mix is the first mixed-breed to ever receive the honor.

“People remark that they have seen intense bonds between handlers and dogs but never like ours,” Hodge said. “We have our own language and anticipate everything about each other.”

Shortly before Gander’s days were up at the Colorado shelter, Freedom Service Dogs was seeking new recruits and identified that special mix of good temperament and intelligence in Gander. Soon Gander was part of a prison training program in which inmates socialize and train shelter dogs in basic manners and service dog skills.

Meanwhile near Chicago, IL, Hodge sought a solution other than heavy medication to help with the traumatic episodes he experiences as part of PTSD. Hodge served in the Army from 1973 to 1981, including a stint in Vietnam. Twelve years later, he began suffering from severe PTSD, having up to five panic attacks a day, each lasting anywhere from 5 minutes to 40 minutes. He lost his job; his marriage dissolved; and he began having suicidal thoughts.

“I had always liked animals and knew I was calmer when I was near them so I started researching service dogs,” he said. “Freedom had made national news several times so I contacted them and applied.”

Seven months later, he got THE call. “They said ‘we have some good news and bad news. Good news is we have a dog for you. Bad news, we know you wanted a Lab, but you are getting a Poodle mix.’”

But as soon as Hodge saw a photo of Gander’s shaggy face, he knew he was the one. He flew to Colorado to start training with Gander and had their first face-to-face meeting.

“We were both scared to death. We both knew life was about to change again and we, both being orphans of a sort, anticipated stress. I was so worried I would make a mistake and he wouldn't like me. I cannot imagine how bad I must have looked to others,” he said. “After two to three weeks we were best friends and family. We are never apart and don't like even a few minutes of separation.”

Gander helps Hodge in many ways. He checks and clears rooms in advance of Hodge entering. Gander can sense when Hodge is becoming anxious and calms him by placing both paws on his chest and licking him in the face. Hodge also suffers from some mobility problems due to arthritis and an autoimmune issue, and Gander helps with bracing and balancing Hodge as well as opening doors and many other tasks.

Hodge felt like life had started again because of this remarkable dog, and he vowed to help other veterans with PTSD obtain their own service dogs.

Today, Hodge and Gander dedicate their time to raising awareness about PTSD, the shockingly high suicide rates among veterans and the profound effect service dogs can have on the lives of trauma survivors (vets and non-vets alike). Together they’ve visited more than 300 schools, nursing homes, hospices and veterans gatherings. Hodge also formed a nonprofit organization called Service Dog Education and Assistance Foundation through which he and Gander educate communities all over the world.

Last December, together with well-known writers, Lon had an anthology of dog stories published called “In Dogs We Trust.” The book sales have raised more than $30,000 for Wounded Warrior access programs.

Hodge also spreads awareness through Gander’s Facebook page, where the shaggy dog has nearly a quarter of a million followers.

“We have helped raise more than $150, 000 in the last 18 months for service dog agencies. We have done co-op programs with NFL football player Eric Decker and the Dog is Good Co. All proceeds went to service dog agencies to help anyone who needed a dog. We have also helped connect over 50 people with a need for a service dog with appropriate agencies.”

With all that good work, you might think that Gander does not have much down time. But Hodge said “we make sure to play daily. He loves fetch. He knows 50 to 60 people in the community by name and face and where they hide tennis balls they keep on hand should he come to visit. He is also crazy about fishing. He loves to watch fish and could sit for hours near a koi pond or aquarium….Gander is a joy.”

As a recipient of an ACE award, Hodge and Gander received: