Dogs Have Feelings Too – Book Strives to Improve Child-Dog Relationships 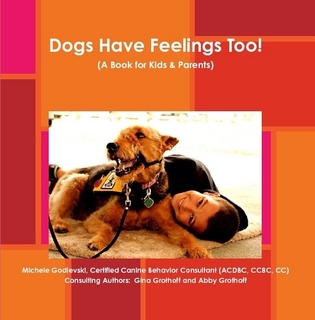 We recently spoke with certified dog trainer and behaviorist Michelle Godlevski of Raleigh, NC, about her new book, Dogs Have Feelings Too. Michelle wrote the children’s book to teach youngsters to recognize dog body language and to promote empathy in children on how a dog feels when they interact with them. The book illustrates with photos the feelings of children compared to similar feelings in dogs. Michelle said parents can learn a lot from the book too and she hopes parents and children will sit down together and go through the book. “Often families miss the signs that dogs are trying to send and the result often sadly ends in a dog bite that could have easily been prevented,” she said.

1.    What gave you the idea to write the book “Dogs Have Feelings Too”?

There are two audiences for this book – parents and kids.

From the angle of education of children, it takes time in child development for kids to understand that other beings have emotions too.  Anyone who has been around a 2-year-old quickly realizes that the child really only sees his own perspective and has little empathy for others.  As children get older, it is important to get them to make the connection – here's how you feel when this happens, right?  So, now how do you think the dog feels when the same thing happens to him?  It’s a very important realization for kids to come to, and there just isn't a book out there that paired the two the way I wanted to pair it up.

Another important consideration is that kids who have that special dog that “let’s the kids do anything to it” are much more likely to get bitten by the neighbor's dog, who may not have that kind of tolerance.  I was one of those kids.

I grew up with an amazingly resilient Rough Collie, who truly enjoyed any interactions with kids.  I dressed him up in outfits, hugged him, and danced with him by holding his front paws.  However, it took two bites from the neighbor's dog (a 13-year-old, vision-impaired Beagle mix with arthritis) to teach me the lesson that not all dogs have the same resilience with kids.  The Beagle mix did not want to dance with me like my Collie did.  It was a difficult lesson to learn, but it was one that stuck with me to adulthood and inspired this book.

From the parent education standpoint, I hear so many parents use the phrases ‘My kids can do anything to our dog,’ and ‘The dog is fine with that.’  While there are some dogs who really crave human interaction, there are many more dogs who simply tolerate rough interactions (like bear hugs and grabbing items away from the dog).

In these dogs, stress is accumulating, like steam in a pressure cooker. Eventually one day, the dog, much like a human being under constant stressors, just “loses it.” The dog owners will say ‘It came out of nowhere’ but that is very rarely the case.  Dogs give us non-verbal language, called “Calming Signals.” They turn their heads away, flick their tongues out, shake off, and sniff the ground, among other things.  Calming signals are the equivalent of a doggie “peace sign.”

2.    What are the biggest challenges in getting children to be careful around dogs?

Kids love to stare into dog’ eyes, especially when they are eating or resting, because the dog is still.  This is when kids typically give dogs hugs too.  I usually start each behavior consultation involving children by asking the question: “How do two dogs greet each other?”  Most kids will emphatically respond with “they sniff each other's butts!”, and we all get a chuckle out of that.

But it is true!  The polite “handshake” in dogs is nose to tail!  Then we talk about the fact that dogs consider staring in the eyes to be very rude. (Dogs usually give calming signals or turn their heads away from direct eye contact, especially from a stranger).  I usually joke and say “you don't have to sniff a dog in the butt, but you shouldn't stare right into his eyes.”

I also have a favorite saying I share, “When your dog has a bone, leave him alone.” That goes for sleeping and eating too. The book helps drive that point home. Resource guarding in dogs (guarding food, toys, resting spaces, attention) has a high correlation with bites to children in my case files.

It is very common, after reviewing a thorough case history, that the dog was giving calming signals and warning signs for a long time, which went ignored, or worse yet, were punished.  When a dog feels it can no longer communicate, he will skip to the next level, which is growling, snapping, or biting.

3.    What are the most common mistakes of parents regarding children and dogs?

A growl should never be disciplined! Dr. Ian Dunbar, renowned veterinarian and dog trainer, says the growl is the ticker to the time bomb.

Who would want a bomb without a ticker to warn you that it’s about to go off?  A growl means “Attention parents!  Get off that phone or computer, and get up immediately to see what is going on between your dog and your child!”

It is important that the dog be able to freely communicate the feeling of being threatened. It is even more important that kids understand that a growl is like a red light…..STOP what you are doing! I point out to parents that calming signals are like yellow lights, and parental intervention at the point of calming signals (i.e. re-directing the interaction so the dog is more comfortable), will encourage the dog to trust that the parent will be there to help him, so he doesn't have to resort to biting.

4.    What do you recommend for any family with children that is bringing a new dog into the family?

I highly recommend the book “Living with Kids and Dogs without Losing Your Mind” by Collen Pelar. Her book is excellent and covers different ages of kids and different ages of dogs.  It is a book for parents and is very thorough.

“Dogs Have Feelings Too” is available from Lulu Press.

Michelle has written three other books on dogs and behavior. To read more about Michelle – http://teamworksdogtraining.org/employees/godlevski.htm