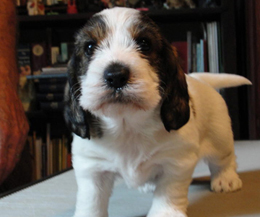 Looking for a happy-go-lucky pooch to bring into your home? Search no further! Learn more about some of the friendliest dog breeds out there… and super cute ones, at that!

Petit Basset Griffon Vendéen
(Try saying that ten times fast!) Confident, happy and extroverted, the PBGV is best suited to active dog owners. Although independent, PBGVs are still willing to please and want to work with owners, coming from their history of hunting small game such as rabbit and hare in their native France.

Beagle
Beagles are known for merry personalities and following their nose, which can lead them into some mischief, and maybe even meeting new friends!

Poodle
An outgoing breed, the Poodle is exceptionally smart and active, and excels in obedience training.

Labrador Retriever
Millions of Americans own Labrador Retrievers due to their even temperament and trainability. Labs love to please their master and excel as guide dogs for the blind, as part of search-and-rescue teams, or in narcotics detection with law enforcement.

Boxer
Patient, spirited with children, and also protective, the Boxer is a popular choice for families. Boxers love to be with people! A notable characteristic is their desire for human affection, especially from children.

Irish Setter
Irish Setters have outgoing, clown-like personalities and lots of energy, making them friendly favorites with families.
Fun fact: Irish Setters became popular in the 18th century throughout Ireland and the British Isles. They were originally used to “set” game, working closely with hunters, crouching low near the birds so that the hunters could walk up and throw a net over bird and dog.

Pembroke Welsh Corgi
One of the most delightful small house dogs, as well as an avid competitor in many dog sports, the PWC is bold and friendly, responds well to training, and loves his family. He may even go as far as trying to herd family members!

Boston Terrier
These companions are nicknamed “The American Gentleman” because of their tuxedo-like coloring, gentle disposition, and intelligence and suitability as companions and house pets! Easy to train and easy keepers, Boston Terriers remain by their owner’s sides!