Ovulation Timing In The Bitch 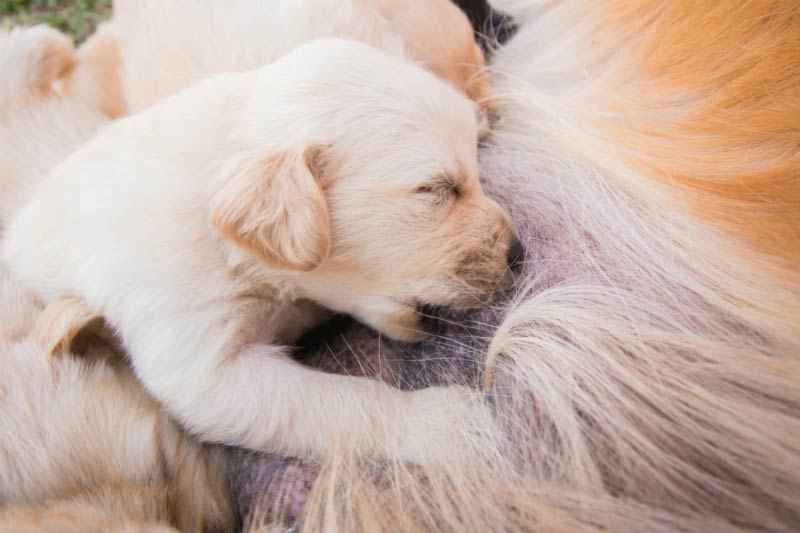 This is an advertorial sponsored by Zoetis.

Timing ovulation within the heat cycle of a bitch isn’t as straightforward as it first appears. Knowing precisely when ovulation happens is an invaluable skill for all breeders because whelping is based on hormonal changes associated with ovulation — not from the day bred.

What Hormones Play A Role In Ovulation?

The first hormone of significance is estrogen. Estrogen prepares the reproductive tract for breeding. It causes the vagina to thicken and diapedesis of red blood cells to occur. This is the part of the estrous period that is highly variable bitch to bitch — it may be as short as 1 day or as long as 21 days or even longer.

After the estrogen period, the next hormone of significance is the Luteinizing hormone or LH. LH is the biological trigger for ovulation in mammals, which we denote as “Day 0.”

Bitches ovulate 48 hours after the LH surge or Day 2 post LH. Dogs go through a further maturation phase post ovulation so their optimum fertile period is Days 4 through Day 6 and post LH surge. Additionally, the LH surge can be less than 24 hours or as long as 48 hours, so without daily blood testing, the LH surge can be easily missed. Zoetis’ WITNESS® LH can help breeders pinpoint the LH surge by providing an accurate, semi-quantitative measurement of canine luteinizing hormone through Rapid Immuno Migration (RIM™).

Prior to the LH surge, the bitch will have considerable edema, or swelling, and dark red bloody discharge. As estrogen drops and progesterone begins to rise at the start of the LH surge, the edema will go out of the vulva and vagina. You may observe softening of the skin around the vulva and a change in the discharge from a dark bloody red to a more serum straw color secretion. This may not be obvious in every bitch. If you are taking your bitch to a veterinarian for ovulation timing they will visually see a change from edematous to crenulation on vaginoscopy.

The day of the LH surge is often when there is a dramatic change in flagging behavior. For example, when a bitch wasn’t flagging in the evening but is in the morning. This abrupt change is often on the day of the LH surge (Day 0) or right around it. This is when fellow house mates will start mounting, but the male is not that interested yet. Male dogs will usually intensify their interest and go off feed and cry for the female on Days 4, 5, 6, and post LH surge.

When intact females are the only dogs in a home, you may notice that the bitch starts to walk around and whine a little, or the bitch may flag when someone bumps in to her. This is something that is very useful to record on bitches’ cycles that occurs prior to breeding. Keep a record of first day of heat, the day the bitch starts dramatically standing, and days where males are crying for them. It’s also good to record the first day where the female goes out or abruptly loses interest in breeding.

Generally when a bitch first starts standing she will be ready to breed starting two to three days later. When males are crying, off feed, and crazy for a female, the bitch is likely in her optimum fertile period and ready to breed then.

When breeding highly fertile males or where semen count and quality is not an issue, progesterone blood levels and vaginoscopy can be successfully used to estimate when the LH surge occurred. Levels are typically in the baseline 20 nanograms per milliliter (although levels can be 40 nanograms per milliliter or higher) during the optimum fertile period. There is variability from one diagnostic lab to another so important to know how your local diagnostic lab tends to run.

The dramatic change in Progesterone levels during the breeding period renders it an excellent tool for ovulation timing. However, some bitches who haven’t read the book and can vary considerably from the expected levels. A veterinarian experienced with ovulation timing (OVT) can help identify these bitches.

Length Of A Cycle In Relation To Fertile Period

Typically, bitches are most fertile the last three to four days before they go out of heat. Bitches often follow a similar pattern each heat. So keeping records on every heat even when not breeding will help you be ready for the heat you do breed. Length of estrus is used as a generally guideline to know when to start progesterone levels.

Testing for bitches that have very short heats, in and our in seven to nine days, needs to begin on Days 2 or 3 of the heat cycle. These bitches often have their LH surge at the start of the heat and are ready to breed within four to five days.

Testing for bitches within 10- to 12-day cycles should begin by Day 6. Begin testing by Day 8 for dogs with 14- to 16-day cycles. Start later for bitches that stay in heat a full 21 days or longer. Just remember, there can be some variation between heat cycles. If the bitch starts flagging earlier than expected then get her in sooner for a progesterone level.

Use whelping dates to look back over timing to see if everything first into place. Bitches generally follow a similar pattern each heat but not always. Often bitch family lines will be similar.

The most common error with ovulation timing is to stop testing too soon.

Sometimes breeders are so excited their bitch has come into season that they start checking progesterone levels too early and too frequently. By the time the levels are getting into the critical diagnostic range, the owner has financial or driving fatigue and stops checking levels. They also may perceive a subtle fluctuation in baseline as “she’s going up” and don’t confirm the sustained rise with a significantly elevated value. In these cases, they end up breeding too early and the bitch misses. To help prevent this, the ideal time for timing is to get a baseline line level prior to the LH surge, one around the time of the surge and continue to monitor until ovulation is confirmed with a level greater than 5-to-8 nanograms per milliliter. The frequency with which we test may also depend on the type of semen used and the breeding methodology.

As a general, rule stud dogs should produce 10 million sperm per pound of body weight and have more than 75 percent progressive forward motility with less than 20 percent miscellaneous morphologic defects. Since “normal” dog semen lives another 3-to-7 days in the bitch, the better the semen quality, the more leeway there is in ovulation timing.

If managed properly, dogs can be acceptably fertile with much lower counts and quality. As semen quality decreases, the precision of ovulation timing needs to increase.

Ovulation timing precision is increased by more frequent progesterone levels and adding LH testing for the most compromised semen. To help to pinpoint the LH surge, Witness LH, a diagnostic test for the detection of Luteinizing Hormone is available from Zoetis. This test provides an accurate, semi-quantitative measurement of canine and feline LH.

Too few sperm, abnormal sperm, or poor motiligy may all result in poor fertility. Semen evaluation of the male prior to a breeding is always recommended, but if it wasn’t done before breeding and the bitch fails to conceive, it should be done after the bitch is determined to be not pregnant. Sometimes this can be overcome by intrauterine insemination or multiple inseminations, but in other cases, the infertility may be too severe.

LH Surge In Relation To C-Sections

The following information was originally released by the AKC Canine Health Foundation as a podcast on July, 31 2014. If you prefer to listen to the interview, the podcast is available here.