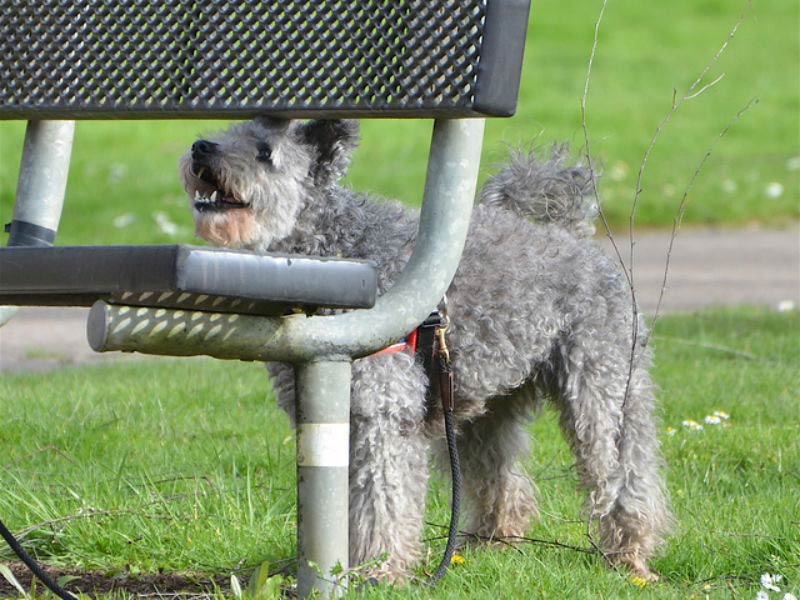 A high school stadium, three sets of bleachers, and one Q-tip dipped in the scent of birch.

Finding that tiny swab, planted somewhere in the arena, seemed an impossible task to Suzanne LeRoy, as she and her Border Collie, Rain, faced their first nose work competition.

“It was a huge area to search,” the California resident said.

But a few minutes later, Rain easily found the Q-tip under the bleachers, and LeRoy discovered the power of the canine nose.

“Now I was really impressed!” she said.

LeRoy is an AKC Breeder of Merit who produces top-winning Border Collies in the breed ring. She also is a certified dog trainer whose dogs have earned numerous titles in agility, herding, rally, and tricks. After her initial success in nose work, she became a certified K9 Nose Work Instructor so that she could share that fun with others.

“I loved that I was training my dog to do what he was born to do: use his nose. I was also training myself to observe my dog. Scent work is all about reading your dog’s body language, and in this, you connect with your dog. You are a team,” she said. “And I love that it’s all reward-based training. The dogs find the source of the odor — they get a treat!”

Smell is a powerful sense for canines –- 10,000 to 100,000 times more acute than the human sense of smell. That ability has benefited man in many ways, from tracking fugitives to detecting bombs.

Dogs love to use their noses, and dog sports that put their sniffers to the test are popular, including tracking and nose work. The AKC obedience class of utility includes the scent articles exercise, in which a dog finds an item touched by its owner among a pile of similar items.

Soon dogs can earn titles in the new sport of AKC Scent Work, which mimics the task of working detection dogs — such as narcotics dogs or explosives dogs — to find a specific scent and communicate to the handler that the scent has been found.

Dogs will search for a hidden odor, which is either an essential oil or their handlers’ scent, depending on the class. Searches will take place in a variety of environments, with classes called: containers, interiors, exteriors, and buried.

“I was thrilled when I learned that AKC was adding it as an event. I plan to pursue all levels of AKC Scent Work titles,” LeRoy said. “I’m a member of a specialty club, and we’ve signed up to hold trials, and I hope there are many.”

Any dog of any breed, size, or age can be successful at scent work. LeRoy found the activity while looking for something to keep her 11-year-old Border Collie, Rain, busy.

“I felt that agility and herding were getting too hard on his bones. Okay, admittedly maybe too hard on my bones, too. I wanted a sport that wouldn’t be hard on him physically.”

AKC Breeders of Merit Tom and Chris Levy have produced champion Pumik for 18 years under the Abiqua kennel name and have shown dogs, including Miniature Schnauzers and German Shorthaired Pointers, for 45 years.

They strive to add titles to both ends of their dogs’ names and were intrigued when a puppy buyer told them about a sport her Pumi enjoyed called nose work. They decided to try it and now have several nose work titled dogs, including one that has earned the top level K9 Nose Work-3 Elite designation.

“The part I like best is, it’s a true partnership with your dog. You are giving them the boundaries of where to search; they’re doing the work and communicating to you what they know,” said Chris Levy. “They gain a level of confidence because, for the most part, they’re in charge, not just taking orders, and you’re interpreting on their behalf.”

Dogs can learn scent work at any age. LeRoy starts her Border Collies while they are still in the whelping box.

“You can start puppies as soon as they are born. Because puppies are born blind and deaf, they rely on smell. You can introduce them to different scents, and you can actually see them react to both good smells and the bad,” she said. “As they get older, you can hide treats for the puppies and have them find them.”

As the dogs mature, trainers progress to pairing the food with the odor that they want them to find. Eventually, they remove the food from the odor and then reward with food when the dog finds the odor.

“When I started my second nose work dog, I decided to train the dog that was my food thief, figuring that she’d already had several years of self-training, and she learned nose work exceptionally fast,” Chris Levy said.

AKC Scent Work is open to all dogs, including those enrolled in AKC Canine Partners, Purebred Alternative Listing (PAL), and the Foundation Stock Service (FSS).

Competitions will offer four levels for each element — novice, advanced, excellent, and master — and will vary factors with the level of difficulty, such as the size of the search area, the number of hides, whether the number of hides is known or unknown to the handler, and the maximum height of the hides. The most accomplished dogs will also be eligible for the detective class, which contains many hides in a variety of environments.

“AKC Scent Work is a modern-day performance event in which bred-for traits such as working drive, concentration, and response to distractions are redeployed into /roles relevant for the 21st century,” said Doug Ljungren, AKC vice president of sports and events. “While the sport of scent work will not prepare your dog to be a working detection dog, we hope it serves to demonstrate to the public the value that these purpose-bred dogs can provide to the security of our nation.”

For more information: get started with AKC Scent Work.