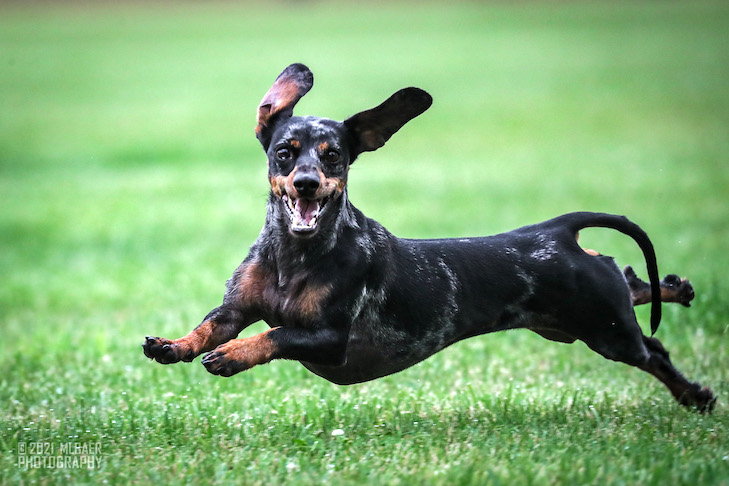 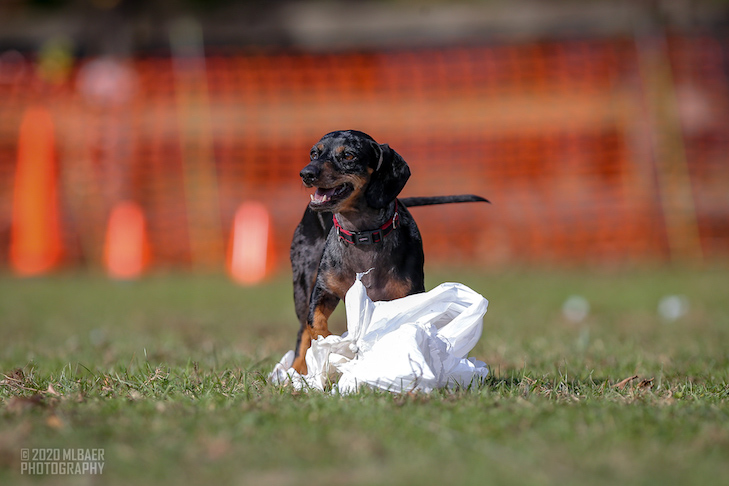 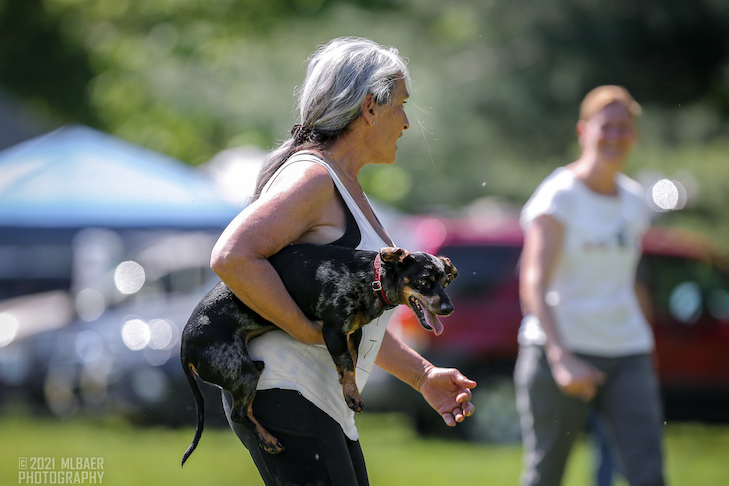 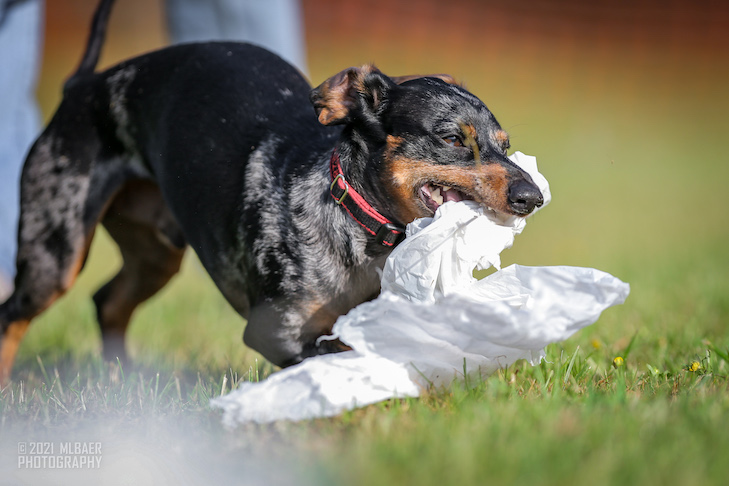 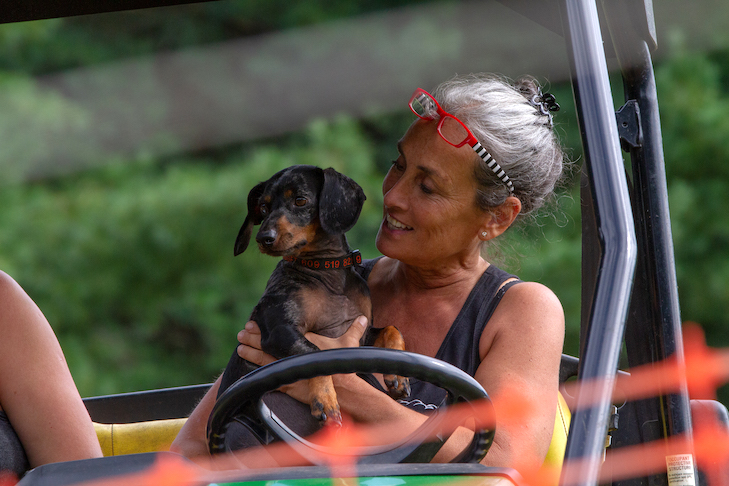 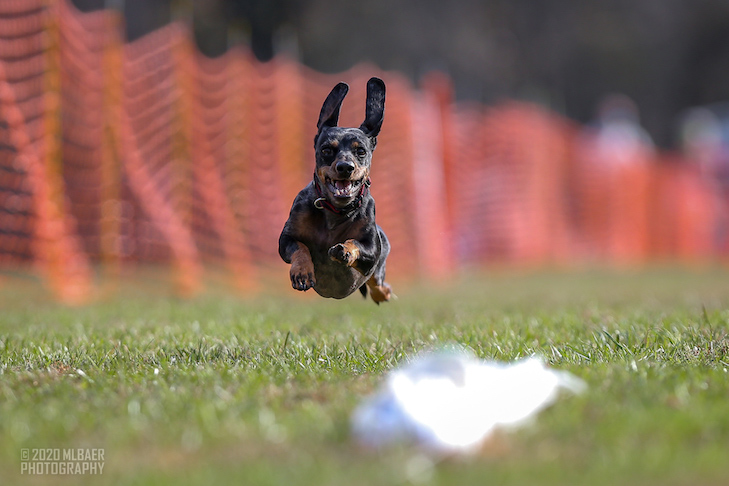 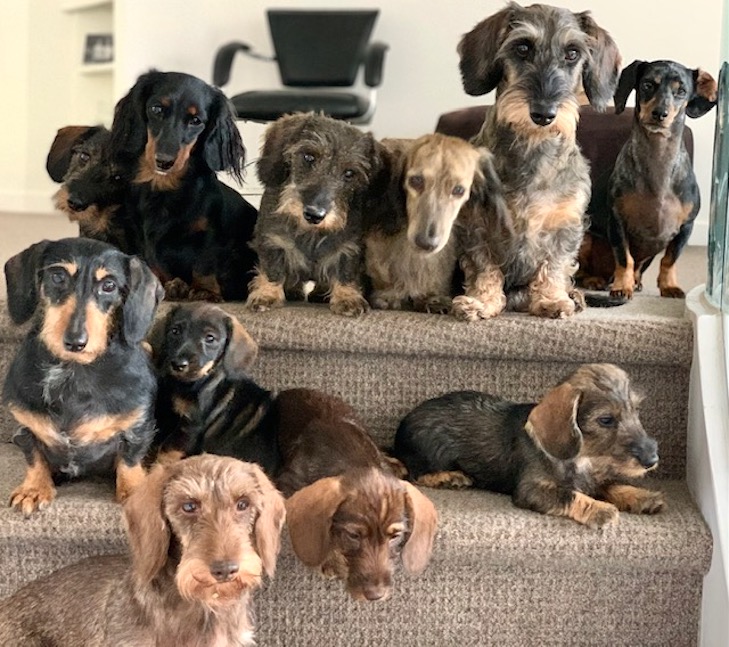 As the fastest Dachshund in the nation, Nugget was invited to compete in Fastest Dog USA. The event will be broadcast on ESPN2 at 12 p.m. ET on December 25. Owner Anne Rosenberg shares Nugget’s journey to becoming the speediest of his breed.

As a child, I had a Beagle named Peanuts. Then, after I bought my farm, I raised and bred Russell Terriers since they were so useful as ratters in the barn. When I finally retired from being a breast cancer surgeon in 2014, I followed my dream to own Dachshunds and began to rescue.

“Seriously”, a black-and-tan miniature wirehaired, was my first Dachshund. But as everyone who has a Dachshund knows, you cannot have just one. So less than a year later, I rescued Nugget, a smooth dapple, and named him after Chick-Fil-A nuggets, which were Seri’s favorite food. Born on Valentine’s Day, he was a funny little dog with lots of energy and personality. He and Seri loved each other, played, and hunted together. 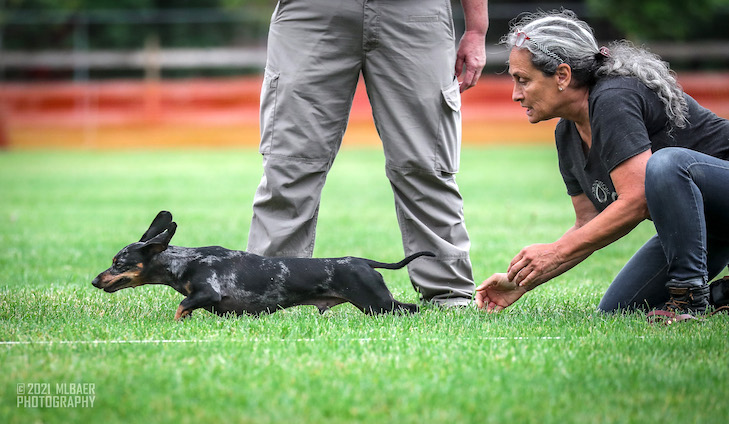 In 2016, we joined the Burlington County Kennel Club, got AKC/PAL numbers, and started to participate in AKC performance events. We first heard about CAT in the fall of 2016 and Nugget loved it! He ran the 300-yard course like the wind and earned his CA title that year.

The next year, we were introduced to Fast CAT by our coursing friends, and Nugget was a rock star! He loved chasing the lure and his feet never seemed to hit the ground as he ran the 100-yard course. He finished 2nd nationally for Dachshunds that year. Since then, he has been the No. 1 Dachshund each year and the top Dachshund for lifetime with top times between 21.8 and 22.17 mph. 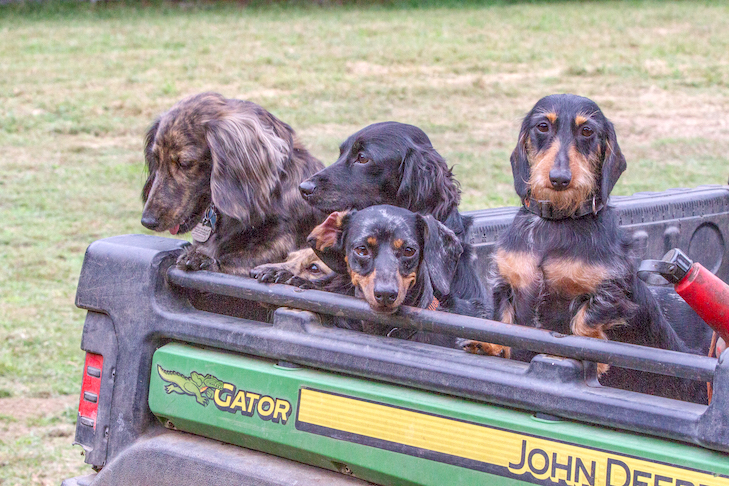 Here he is (center) running a trial at the farm – with Anne waiting in the gator to drive him and his gang back to the start line for their second runs.

A House Full of Dachshunds

Over the past 5 years, Nugget has achieved over 30 titles and is working on his FCAT4. He has performed in obedience, excellent Rally, dock diving, master agility, tracking, Canine Good Citizen, Trick Dog, Therapy Dog, and more. (His unique appearance and lack of AKC birth papers preclude him from showing in conformation – he clearly is not a conformation dog!)

Earning the VCD1 puts him in a distinguished group of under 45 Dachshunds who have earned this combined title over the past 20 years. He and his gang also participate in the social events at our barn and in the community – they love Halloween!

The headcount at the house is now 11 Dachshunds (Nugget is the only smooth) and two terrier mixes that rule the small barn by the house. Everyone learns multiple sports and has been very successful. His gang has earned master and senior Earthdog, Master Rally legs, 6 TD titles and 5 CD titles. Everyone who is over one year old has a Fast CAT title! Three just earned BCAT and four have earned DCAT.

Being Part of the ESPN Fastest Dog Event

Running Fast CAT has been so good for all of my dogs. They have learned to be independent at the start, develop prey drive for the lure, stay focused on the lure (the task), overcome environmental pressures, and run all out! With Fast CAT, they can be dogs!

Nugget is such a special dog. We are excited for people to see that even non-traditional breeds can be versatile and excel and embrace their quirks and uniqueness. We are grateful for the chance to participate in the Fastest Dog USA event.

Thank you to Mark Baer, Jessica Jones, and Halie Longobardi who brought him to Orlando and took care of him while he was at the competition (they are part of Nugget’s village, have photographed him over the years, capturing his energy and talent, and he loves them!)

Any dog, including mixed breeds, can participate in Fast CAT. To get started, make sure your dog is AKC-registered or enrolled as a PAL (Purebred Alternative Listing) or Canine Partner (mixed breed). Next, find a Fast CAT event in your area. Check with your veterinarian to make sure your dog is healthy enough to participate, then go for it! You’ll be surprised by your dog’s natural instinct to chase the lure.

Watch Nugget, the country’s fastest Dachshund, run against the clock to beat out the nation’s other speedy canines. The event takes place in Orlando at the ESPN Wide World of Sports. Tune into ESPN2 at 12 p.m. ET on December 25 to enjoy the fun.