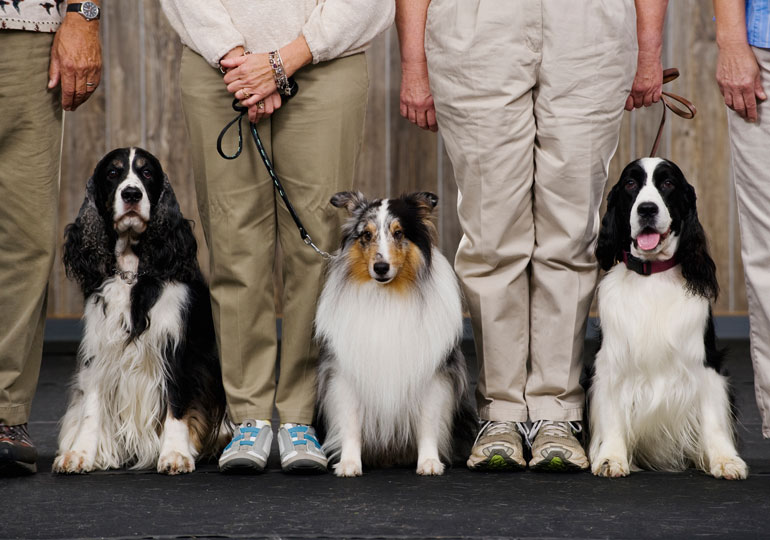 Watching a dog show can be confusing—albeit, still entertaining—if you're not in the fancy. We prepared a glossary of common dog show terms. Study up now, and be ready to sound like a pro when Westminster rolls around.

Bait A bite-size treat, perhaps a bit of liver or cheese, used by a handler to get the dog’s attention in the ring and to demonstrate expression to the judge; used by show folk as a verb: to bait.

Benched show An all-breed show at which the dogs must stay in an assigned benching area for the length of the show when they are not being shown, groomed, or exercised. The idea is to allow spectators to see the dogs up close and talk to the breeders, owners, and handlers. The annual Westminster Kennel Club and International Kennel Club of Chicago shows are two of the biggest benched shows.

Bitch Go on, say it out loud—you’re at a dog show! In most contexts, the word “dog” works for either sex. (“The neighbor’s dog had puppies last night.”) But around the ring, “dog” means male and “bitch” means female. Since dog shows serve as an exhibition of breeding stock, the distinction is vital for obvious reasons.

The word bitch is bandied about endlessly at shows. If you plan to get seriously into dogs as a family activity, it might be wise to have a little talk with the kids to explain the appropriate and inappropriate uses of the B word.

Champion A dog that earns 15 AKC championship points, including two shows at which 3-to-5 points are awarded by two different judges (and at least one other judge awarding the remaining points), achieves the title AKC Champion of Record and has the prefix abbreviation “Ch.” appended to his registered name.

Conformation A dog’s conformation is its physical form and structure. A dog with proper conformation conforms to the breed’s written standard. Traditional dog shows are often referred to as conformation events, as opposed to such performance-oriented activities as agility or hunting field trials.

Dam The canine equivalent to the word mother; the canine male parent is called a sire.

Ex-pen A portable, wire-frame enclosure that provides a show dog with a safe, clean place to stretch his legs and eliminate at show sites; short for “exercise pen.”

Fancier/fancy A fancier is someone with an abiding and active interest in dog shows, whether as an owner, handler, judge, or breeder. In the course of a lifetime, a fancier might play all these roles and others within the sport of dogs. The “fancy” is the worldwide community of these enthusiasts.

“Form follows function” The breeder’s unofficial motto, it means that the individual breeds look as they do because they were built to perform specialized functions. The flock-guarding Komondor’s long, corded coat that protects him from harsh weather and sharp-toothed predators; the Basset Hound’s short, muscular legs that enable him to follow a long trail over rough terrain; and the extra toes of a Norwegian Lundehund bred to climb rock cliffs are all examples of form following function.

Gait The pattern of footsteps at various rates of speed, each distinguished by a particular rhythm and footfall. The high-stepping “hackney” gait of the Miniature Pinscher and the loose-jointed “roll” of the Bulldog are obvious extremes. Gait is an important consideration to judges, who know that incorrect movement is a sign of faulty construction.

Groups AKC-recognized breeds are grouped into seven categories according to the jobs for which the breeds were originally created. Sporting, Hound, Working, Terrier, Toy, Non-Sporting, and Herding are the groups that are featured.

Lead A handler guides a dog around the ring on a lead, not a leash. A show lead is much thinner than the usual leather leash you might use to take your dog for a walk.

Special A noun describing a dog or bitch that has completed or finished a championship title and is in competition for Best of Breed. As a verb: to special a dog.

Stack To stack a dog is to cause him to pose in a way that best displays his strong points to the judge. “Hand stacking” means to physically manipulate the dog into position; in “free stacking” the handler gets the dog to stack by use of bait, commands, signals, or a tug on the lead.

Typey Type refers to characteristic qualities that distinguish a breed — the embodiment of the breed’s essential traits. A dog exuding type is therefore said to be typey.

Withers The place at the shoulders where the back and neck meet. This is an important word to remember because a dog’s height is measured from this point to the ground. A Bloodhound might measure 26 inches at the withers, but he stands considerably taller when his long head is taken into account.

This e-book is a great resource for anyone who's considering dog ownership or already owns a dog. Download for tips on how to be the best dog owner you can be.
*Turn off pop-up blocker to download
AKC Privacy Policy
Founded in 1884, the AKC is the recognized and trusted expert in breed, health, and training information for dogs. AKC actively advocates for responsible dog ownership and is dedicated to advancing dog sports.