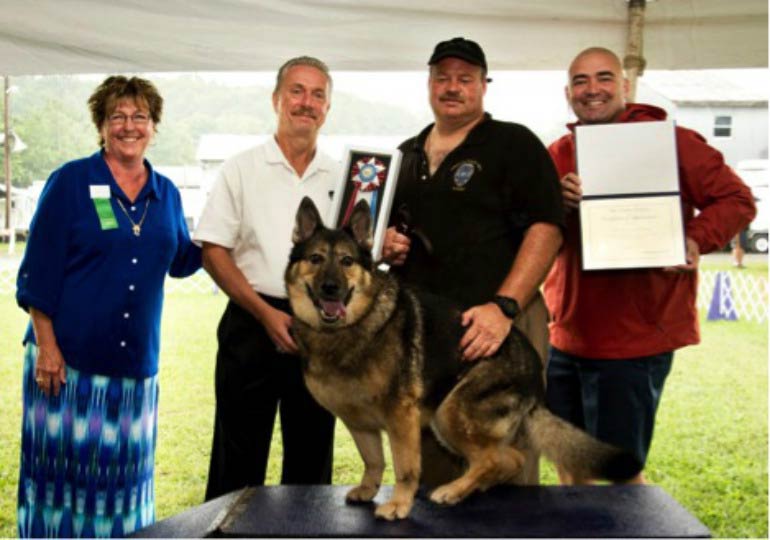 Tioga County Kennel Club honored two officers and their K-9s in a special presentation at their all-breed show on Sunday, August 21, 2016 in Apalachin, New York.

The Tioga County Kennel Club has been a proud supporter of the Southern Tier Police Canine Association for several years and has donated over $5,000 to their organization.

Sig is a two-and-a-half year old Belgian Malinois. He arrived in the United States from Belgium on Christmas Eve 2014.

Sig and Officer McCulskey are currently employed as a patrol canine team by the Village of Spencer New York Police Department.

Tarah is a 8-year-old German Shepherd Dog that was born at the Royal Canadian Mounted Police Service Training Centre in Alberta, Canada. Tarah was sold to the Southern Tier Police Canine Assoc. in 2008 and immediately began her training as a Narcotics Detection Police Service Dog and Tracking Dog with her handler and trainer, Endicott, NY Police Officer John Vanek. Tarah is trained as a passive alert Police Service Dog, meaning she will come to final positive alert position to the odor of illegal drugs, sitting facing her handler. Tarah is the only dog trained and certified in the area to scan the air emanating from around people, making her a unique criminal interdiction tool.

Tarah’s unique ability gained her national attention when she was mentioned by several late night TV hosts (such as David Letterman and Conan O’Brien) after a news article was published about an individual that walked up to pet Tarah while they were on patrol.

Tarah alerted the odor of illegal drugs emanating from that individual and marijuana was recovered and the individual was arrested.

We thank these hardworking K-9s for their service to our community!