The Temple of Iris Love: Remembering the Beloved Dachshund Fancier

David Fitzpatrick and Iris Love after winning Westminster in 2012 with Pekingese "Malachy."

Cornucopia
Jürgen Frank's 2018 portrait of Iris Love in New York (left) and making a spalsh in the 1970s, by Harry Benson.

Iris Love an her longtime partner, Liz Smith, in Athens.

The Temple of Iris Love: Remembering the Beloved Dachshund Fancier 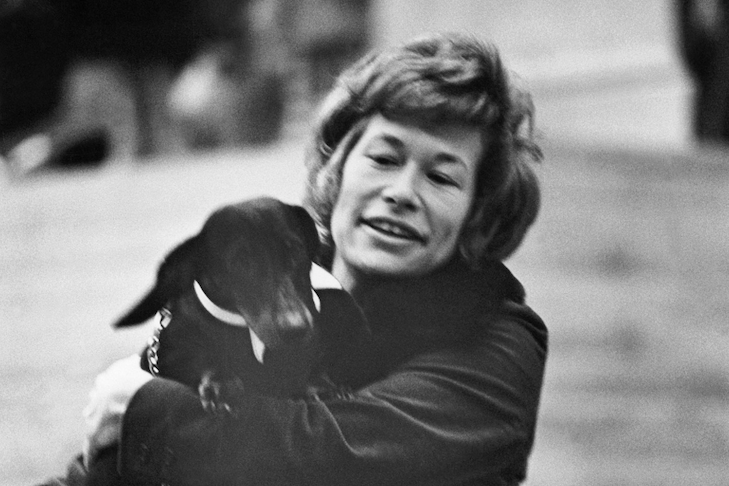 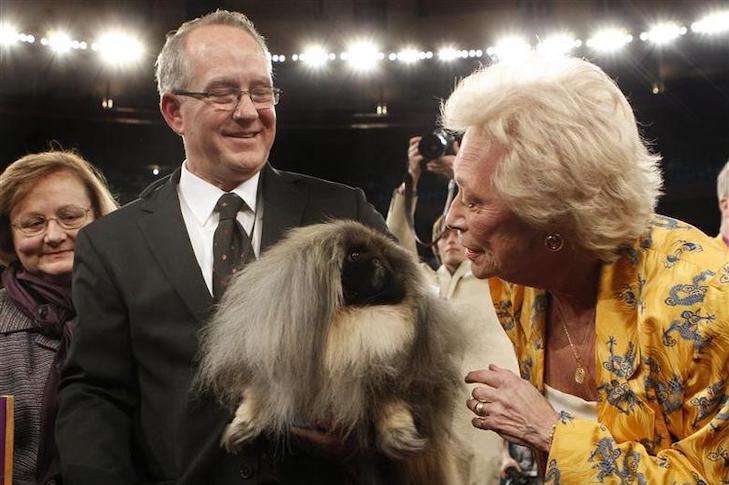 /
David Fitzpatrick and Iris Love after winning Westminster in 2012 with Pekingese "Malachy." 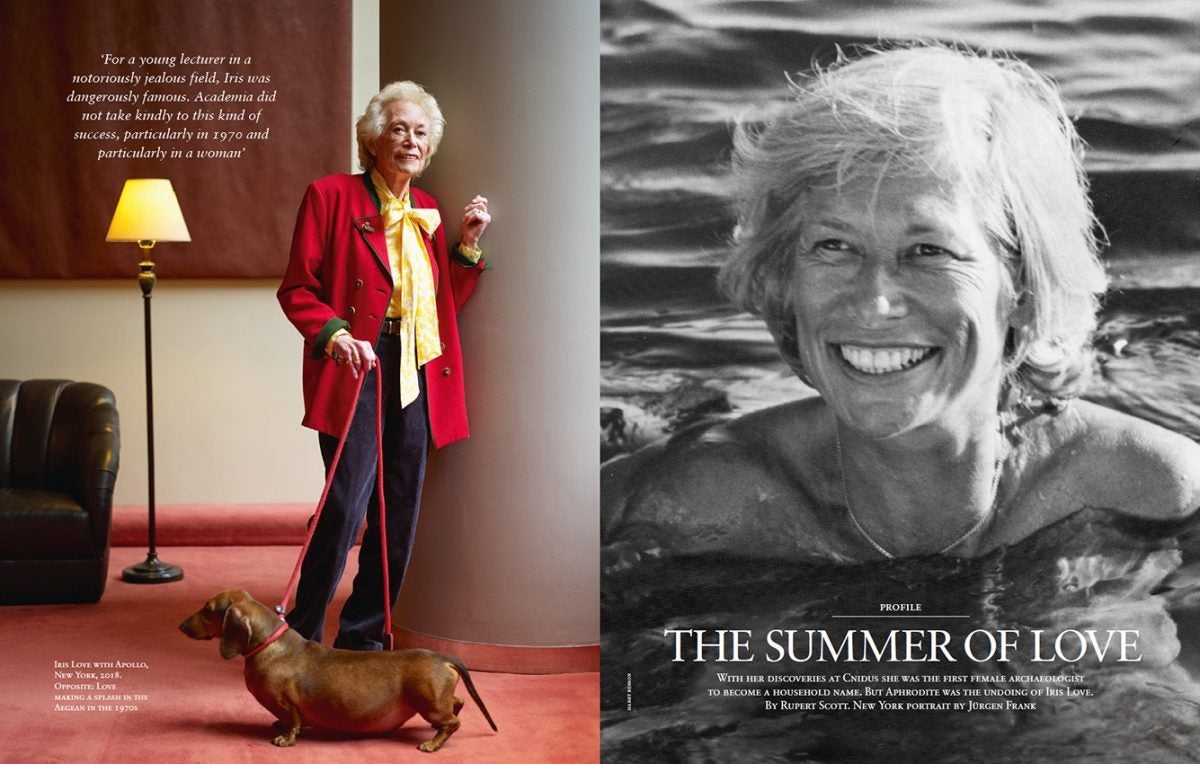 /
Cornucopia
Jürgen Frank's 2018 portrait of Iris Love in New York (left) and making a spalsh in the 1970s, by Harry Benson. 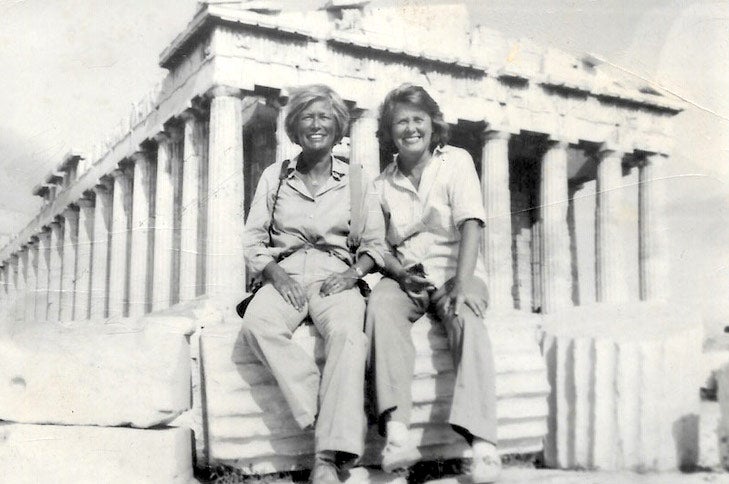 /
Iris Love an her longtime partner, Liz Smith, in Athens.

In 2003, when their sister Carol was critically ill and in a coma, long-time Afghan Hound fanciers Francine and Honi Reisman entered her Manhattan hospital room to an unusual sight.

Iris Love, the famous archaeologist and dog fancier, was lying face down on the floor, her arms stretched out at her sides.

“She had covered our sister with religious symbols, including a silver cross given to her by the Pope and a treasured photo of the only living Buddha, which he had bestowed on Iris,” Francine Reisman remembers. “Iris was praying for her very dear friend in her own special way.”

Today, that photo of the Dalai Lama hangs in Carol Reisman’s bedroom, a testament to her eventual recovery. But the famous fellow Dachshund lover who gifted it to Reisman is now gone, though her larger-than-life persona endures.

Iris Love at the site of the Temple of Aphrodite in 1969.

In a dog world filled with fascinating personalities and marquee names, Iris Love was a standout. A breeder of champion Dachshunds – which she named after the ancient gods and goddesses whose temples and artifacts so fascinated her – Love was also associated with a number of top-winning Pekingese: She co-owned “Malachy” (Ch. Palacegarden Malachy), who won Best in Show at the Morris & Essex Kennel Club in 2010 and as well as at the Westminster Kennel Club show in her native New York City in 2012. When she passed earlier this month at age 87, Love was one of the owners of another high-profile Pekingese handled by David Fitzpatrick: GCh. Pequest Wasabi, who won the 2019 AKC National Championship before he was even two years old, and who is currently the top show dog of any breed in the country.

Best known amongst fanciers for her love of Dachshunds, Love spent much of her life promoting the qualities she loved about her championship line. “Dachshunds are courageous to the point of brashness,” she said to the New York Times in 1996. “They’re also good strategists and very affectionate, although they can be a bit of the snob, too.”

Love made her name in archaeological circles in 1969 with the discovery of the long-lost Temple of Aphrodite at Knidos on the Anatolian coast of modern-day Turkey. On a sweltering July day – just as Neil Armstrong was taking his first steps on the moon – Love spotted the circular temple dedicated to the Greek goddess of love. The ensuing headlines – “Love Finds Temple of Love” – made a celebrity out of the thirtysomething archaeologist, whose penchant for miniskirts and frequent use of the word “darling” made quite a contrast to her often fusty male colleagues.

“Iris had to be the most interesting person I have ever known well,” says internationally respected judge Desmond Murphy, who met Love through the dog world and has fond memories of late dinners that often stretched into the wee hours of the morning. En route to the theater, ballet, or opera, “no matter where we went in New York City, everyone knew Iris,” he says, “from the great celebrities to even all the restaurant wait staff and doormen.”

Indeed, it seemed there wasn’t anyone in the world Love didn’t know. Aside from the aforementioned Pope and Dalai Lama, there was a galaxy of celebrities and movers and shakers. Mentioned in pop artist Andy Warhol’s diary nine times, Love schooled Barbara Streisand and Mick Jagger in Greek mythology, and jetted to birthday soirees for moguls like Malcolm Forbes.

Love herself hosted over-the-top parties where she and her longtime partner, the late tabloid gossip columnist Liz Smith, often dressed in costume. (“Iris was wearing a toga around her head and Liz Smith was in a cowboy suit,” Warhol scribbled about Love’s 1981 birthday party, rattling off a guest list that included Diana Ross and Morgan Fairchild.)

Among canine cognoscenti, perhaps the most coveted invite was to Love’s annual Westminster-weekend Dachshund bash (called Honoring Show Dogs and Dachshunds in Particular) at Tavern on the Green in Central Park, where she once arrived in a chariot.

A regular attendee amid the fire-hydrant-shaped ice sculptures and canines crafted out of chopped-liver paté was fellow Dachshund devotee Brooke Astor; when the famous socialite died at 105 in 2007, designer Oscar De La Renta and his wife Annette drove her dogs to Love’s weekend home in Vermont, where they lived out the rest of their lives.

At Westminster in 1996 and 1999, Love’s smooth-coated Dachshunds won Best of Breed.

Iris Love, Carol Channing, and Arete the Dachshund at Love’s annual Tavern on the Green party in 1996.

“She Enjoyed Every Minute of Life”

Love “was adored and respected by all,” Murphy remembers. “She enjoyed every minute of life, and it was a great privilege to be her friend.”

Love often said she was inspired by the Greek goddess who put her on the archaeological map, a divinity born of sea foam who caused flowers to bloom beneath her feet wherever they touched the ground.

“The horrible thing is that in many civilizations, dogs were used as sacrifices to honor the gods,” Love told New York Magazine in 1996. The goddess of love, however, never demanded such a heartless form of tribute. “And I try to follow in her footsteps.”