Wasabi is the first AKC National Championship Best in Show winner to represent the Toy Group. 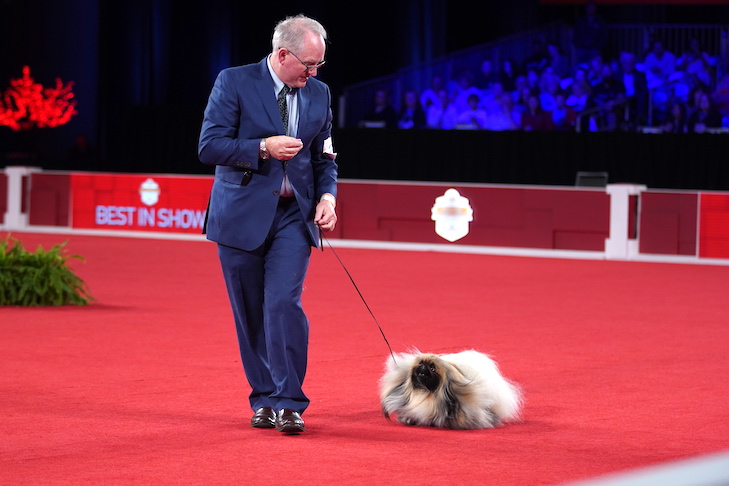 /
Wasabi is the first AKC National Championship Best in Show winner to represent the Toy Group. 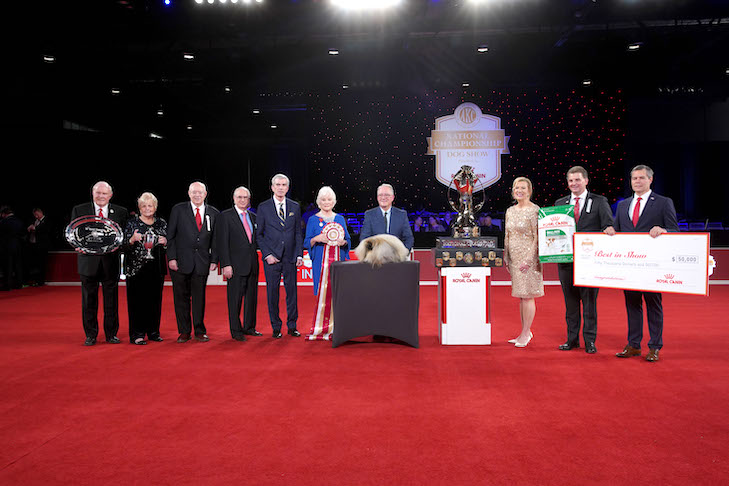 Anticipation is a double-edged sword: The more you expect from a situation, the greater your disappointment if those hopes are dashed.

But the opposite is true as well: If Goliaths are bruised by their falls from grace, can you imagine the sheer ecstasy of a David who expects nothing and gains everything?

This December, Best in Show at the AKC National Championship Presented by Royal Canin was won by a relatively unknown 20-month-old Pekingese named GCh. Pequest Wasabi, marking the first time a Toy dog has won top honors at the kennel club’s flagship show. And for Wasabi’s breeder-owner-handler, David Fitzpatrick of East Berlin, Pennsylvania, the victory in Orlando, Florida, also completes a trifecta: Fitzpatrick has now won Best in Show with a Pekingese at the nation’s three most prestigious all-breed shows: the AKC National Championship, Westminster and Morris & Essex (twice – a not inconsiderable accomplishment when one considers that show is only held once every five years).

“I had no expectations,” admits Fitzpatrick, who in the last three-plus decades has become internationally known for his Pequest Pekingese. “Wasabi is a young dog that won one Best in Show before this and has been shown very little sparingly. Dogs like that do not win Best in Show in Orlando.”

This one, of course did, and Fitzpatrick ticks off Wasabi’s many virtues – the correctly pear-shaped body, distinctive rolling gait, dignified temperament and typey head, from his broad skull to his round, wide-set eyes.

But just as important as those physical traits is that intangible “it” factor.

“He’s very charismatic,” Fitzpatrick says. “The first time I put him on a lead as a puppy, I thought, ‘You’re a winner.’ He just pulled himself together, got his head up, and carried himself around with this tremendous pride.”

The Slow and Steady Pekingese

While showing a Pekingese looks easy – just walk in a small circle at a speed best described as animated shuffle – what the breed lacks in size it more than makes up for with an inversely outsized sense of self.

“The Pekingese is not a breed that wants to please you – for centuries and centuries, people have been pleasing the Pekingese,” Fitzpatrick explains, noting that these palace dogs, which could only be owned by the Chinese royal family, even had their own servants.

Getting a canine aristocrat who is impervious to treats or praise to follow your lead requires Freudian levels of psychology. “Whatever they do, you have to pretend it’s their idea,” he sighs, noting that this “pride of existence” is what makes the breed both fascinating and challenging. “And hopefully it coincides with what you want them to do.”

Fitzpatrick notes that while it seems counterintuitive, it’s much easier for handlers to speed up in the show ring than it is for them to go slow. “When you go into the ring and your adrenaline gets going, it’s human nature to start speeding,” he says. “I always try at a bigger show to actually put things a little more into slow motion.”

Metaphorically, at least, that’s not what happened in Orlando this December.

First, Wasabi won Best of Breed in an entry of 30 Pekingese – a huge turnout adjudicated by Jeffery Bazell, himself a successful Toy breeder of Brussels Griffon.

“If I win the breed, I just want to go into the group and have him look good,” Fitzpatrick remembers thinking. “It would be great if we can make the cut and get a group placement.”

Judging the Toy Group at the AKC National Championship was Edd Bivin, himself a Toy breeder of Pomeranians who is among the most knowledgeable – and respected – judges in the nation. In taking the blue Group 1st ribbon, Wasabi bested some of the nation’s biggest winners, including the Havanese who is the nation’s number-one dog and last year’s Westminster Reserve Best in Show.

A Dash of Hot Wasabi

While Wasabi’s win under Best in Show judge Dorothy Collier was a bit of an unexpected jolt – not unlike the Japanese condiment after which he is named – his provenance comes as no surprise. Starting off in dogs as a teenager, Fitzpatrick learned to groom and rear dogs at high-profile kennels, going on to become a professional handler specializing in Toys and some Non-Sporting breeds. Beginning his own breeding program in the 1980s, he has won the Pekingese Club of America national specialty at least 20 times, and handled as many different dogs to all-breed Best in Show wins.

As for Wasabi’s future, Fitzpatrick of course intends to keep showing him. Because of his recent arrival on the dog-show scene, Wasabi was not pre-invited to Westminster, as all the top-ranked dogs of every breed are, but providentially his entry was accepted. (Getting in is not a given at that famous show, which caps its total at 2,500 champions and turns away entries once that number has been reached.)

“Like anything in life, things can change in a second,” Fitzpatrick says philosophically. “Wasabi went from an unknown dog to a history-making dog.”

And now, in a turning of the tables, one with definite expectations.