Service Dogs for Heroes: Providing the Perfect Partners for Veterans 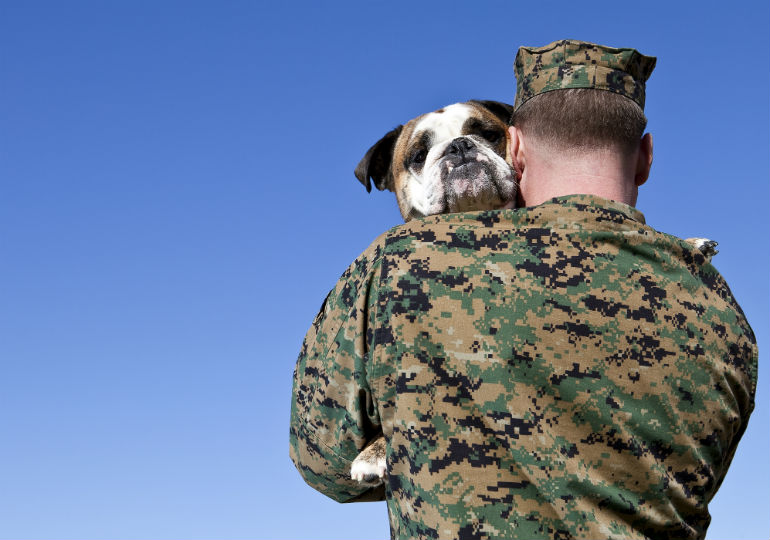 Veterans undoubtedly are heroes who selflessly serve our country, but many people don’t realize what these brave men and women go through when their duty concludes. Many return home suffering from post-traumatic stress disorder and struggle to ease back into a “normal” day-to-day routine, even with their friends and family. This can become even harder for those who have been physically affected by injuries while on active duty.

BJ Ganem knows this all too well. As a Marine Corps veteran who lost his lower left leg during operations in Iraq in 2004, he had a difficult time adjusting to life as a civilian. For Ganem, the saving grace came in the form of a Bulldog puppy. Although this dog wasn’t formally trained as a service dog, he gave Ganem an immense sense of comfort. “He served that purpose early on when I was injured,” Ganem explains. “He would lie on my leg and make it feel better. He helped with my distress.”

And just like that, an idea was born. “Dogs have a natural kinship with human beings. Now, for service members when they’re getting out of the military, when they come back, there’s not that many people who have a good understanding of military culture,” he says. But the dogs seem to sense their feelings. “It’s hard to say that you’re not impacted by serving in the places where we serve. You’re changed by that. It’s hard to transition back. Having a dog that is there for you 24 hours a day, 7 days a week helps. It gives you somebody to look after, too.”

Service Dogs for Heroes was established primarily as an attempt to give back that feeling of partnership that most veterans so desperately miss when they get back home. “In the military, the smallest unit is what’s called a ‘fireteam,’” he explains. “These service dogs help reestablish that fireteam. To give [veterans] that sense of a team, so they can build on that.”

The program works hand-in-hand with already existing service dog providers to encourage them to work more dynamically with veterans. “[I thought] it would be better if there was an organization that would help all these service dog [organizations] do better, especially for veterans,” he says. “So, we created this whole Service Dogs for Heroes concept and started building the network.” Since the concept has been in place, the goal has far exceeded what Ganem set out to do. “Right now, I promised 20 dogs in 2017, and I think right now I’m trending at 33.”

A lot of service dogs are needed, obviously, for mobility issues (helping veterans who have lost limbs or have vision or hearing impairment), but it goes much deeper than that. Some men and women struggle to reassert themselves, even with their families, and these dogs help make the transition easier. “Once they have that service dog for a week or two, you just see their shell start to open,” Ganem says. “They become better parents, better friends, husbands, wives . . . Even if I can get [usually a male] to interact with his children more because of the dog, that’s a win for me.”

When it comes to pairing dogs and veterans, the process is understandably very complex. “There’s a lot of science that goes into it,” Ganem explains. More often than not it comes down to the specific needs of the veterans and what each dog is capable of doing, but an emotional connection and sense of partnership is vital.

Ganem has countless stories about the ways the dogs provided through the program have impacted the lives of veterans. But two particularly stand out.

“Joe Worley, who lost his leg above the knee back in 2008, America’s Vet Dogs helped him get a service dog. After his injury, he was struggling to get up, and he was overweight,” he recalls. “But after getting his dog, Benji, he gained confidence to get up and do things because he knew that Benji could tell when he was about to fall. The dog would get in the right position and keep Joe from falling. Joe even started working out again.” Worley competed last month in his first all-natural bodybuilding championship. He came in third place.

“Melissa Stockwell was injured early on in the war, I believe in 2004, and she lost her leg above the knee,” Ganem says. After a service dog came into her life, Stockwell, too, regained confidence and mobility. She took bronze in the triathlon in the Paralympics in Brazil.

One of the most important aspects of this program is having the public be educated on what a service dog actually is and does, so boosting awareness is a top priority for Service Dogs for Heroes. Volunteers play a pivotal part of the program’s success, as well, since raising a service dog is challenging.

“I haven’t met anybody whose life wasn’t impacted positively by this program,” Ganem says.