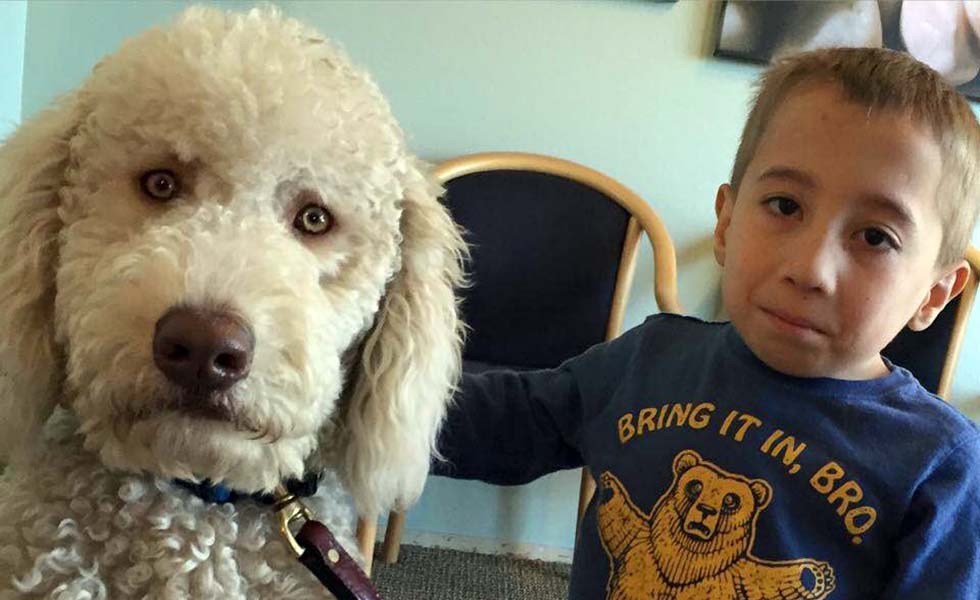 by Ranny Green via the Seattle Kennel Club.

You can’t blame 9-year-old Luke Gonzalez, of Yelm, if he feels like he’s on overload some days. He attends physical and speech therapy classes once and twice each week, respectively, takes guitar lessons weekly, attends a church youth class weekly and is home schooled along with his four siblings daily. Several months ago another class was added to his busy schedule but this one prompted an entirely different form of psychological gymnastics from the affable little guy.

It was called the AKC S.T.A.R. Puppy Program, and as you might have guessed Luke had a partner, Snoopy, a Labradoodle, his father, Maj. Gary Gonzalez (stationed at Joint Base Lewis-McChord) and mother, Amy, picked up May 2 near Yakima. Luke isn’t your typical 9-year-old. He was diagnosed with a form of dwarfism called spondyloepiphyseal dysplasia congenita when he was 1-year-old at Texas Children’s Hospital. Since then, he and his parents have visited a geneticist at a skeletal dysplasia clinic annually.

He is being seen at Seattle Children’s hospital, where his physical condition is monitored (hips, eyes, height/weight, spine and joints) and his growth is charted. He is 35 inches tall and weighs 40 pounds. Since he was 9 months old, Luke has been fitted for eight sets of ear tubes. At age 3, he had soft-palate repair at University of Alabama Birmingham Children’s Hospital and two years later a spinal fusion was performed there. “The fusion was very successful,” says Amy Gonzalez, “and he has had excellent health since.”

About a year ago, Gonzalez conferred with Luke’s physical therapist about the couple’s expectations for the boy’s independence and safety in public places. “The more we talked,” she recalls, “the more we realized that Luke is very small and it’s going to be a huge challenge for him to navigate this world of taller people. “For the first time, we began talking about how a service dog would be an incredible option for Luke. It would not only increase his physical presence but would be a great ‘ice breaker’ socially along with boosting his self-confidence in public.” With 7½-year-old Chief, a golden retriever, already part of the busy household, the couple was challenged to find a hypoallergenic, medium-sized breed that Luke could handle.

“I looked at a lot of breeds online,” recalls Gonzalez, “and also talked to people who have service dogs. Some of our other priorities were finding one that was friendly and welcoming, since we didn’t want other kids to be scared of it, along with highly trainable, affectionate and capable of forming a strong bond with Luke.”

Earlier this year the family established a GoFundMe and Facebook page, “A Dog for Luke,” that raised $7,990 in two months to help pay for a service dog and subsequent training. Shortly thereafter, Luke’s physical therapist suggested the couple contact Paws-Abilities in Fife for assistance in breed selection and establishing a service-dog training regimen for the youngster. Paws-Abilities head trainer Dana Babb advised having Luke look at pictures of dogs to determine what he was attracted to and she proceeded to offer helpful tips about size and temperament. “We wanted a dog that was about 20-22 inches tall from a breeder with excellent credentials,” says Gonzalez. They settled on a Labradoodle and initially contacted an Indiana breeder, who came recommended by another client at Paws-Abilities. When that individual failed to answer some of the Gonzalez’s questions relative to genetic testing, the couple turned to the Yakima area breeder, from who they eventually purchased Snoopy.

“We have attempted to establish a pathway for Luke and Snoopy,” says Babb, “with no timetable in mind. Each individual and dog is different physically and psychologically. We are seeking to build a partnership where Snoopy respects Luke and responds to his needs.” The pair enrolled in basic puppy kindergarten training and segued into the AKC S.T.A.R. Puppy Program class in September, finishing up in early October, under the tutelage of Sher Yeuroukis. The basic-training class taught Luke how to effectively communicate with Snoopy and socialize with others in a setting outside the home.

“Gary and I are both thrilled with the progress we’ve seen,” says Gonzalez. “In addition to learning the basic commands and walking nicely on a leash, Snoopy has become Luke’s best friend. Snoopy has helped others see Luke as more approachable and in return, Luke has had a good experience talking with others about Snoopy and explaining why he has him.” The 35-pound Snoopy has learned to pick up things like a pencil or eraser when Luke drops either and place it back in his hand. Eventually, the dog will be trained to assist Luke in navigating staircases, curbs and crowds more easily in a wheelchair that is on order. The third-grader spends about an hour daily fine-tuning commands and playing with the dog.

“Luke and Snoopy have come a long way since their first S.T.A.R. class,” Yeuroukis smiles. “In the first class, Luke could hardly hang on as Snoopy wanted to go everywhere. By week 5, the two were walking calmly side-by-side. “We’ve had a few steps backward, too. When Snoopy sits, he is taller than Luke. This makes getting him into a sit position a challenge for Luke. Luke is smart, funny, friendly and very well-mannered for a young man his age. He listens well and he tries until he gets it. He loves his dog and his family is right there to support him.”

Searching for a single word to characterize Team Gonzalez, Yeuroukis says “joyful.” Chief, the family’s golden retriever, has provided the perfect physical outlet for the young Labradoodle. “Snoopy just loves to test his boundaries with Chief’s patience,” Gonzalez laughs. Gonzalez heaps praise on Babb and Yeuroukis. “They have been incredibly helpful and have told us continually they are just a phone call away when the need arises,” she says. “Our family’s lack of knowledge about dog training has probably set us back a bit, but with their (Babb and Yeuroukis) encouragement and understanding we have moved forward at a manageable pace.” Luke says, “Snoopy is very smart. I am looking forward to having him be my service dog so that I can do more things without having to ask my family to do things I want to do by myself.

“While I’ve taught him a lot of things like sit, down, stay, come and drop it, I want him to learn how to ‘leave it,’ when he tries to eat things like my toys. I am also working hard to teach him to walk beside me on a leash.”

Luke and Snoopy were enrolled in a children’s Roll Over Rover class, designed to instill fun into the responsible dog-ownership teaching process and taught by Yeuroukis in October and November. The sessions enabled the children to make friends, help their dogs make friends and allowed each to emerge from their comfort zones and share information about their dogs, says Yeuroukis. “They have humbled me with their free-thinking easy spirits, their optimism that it will all work and their unconditional forgiveness when I goof up something.

“We are always looking for ideas to make it easier for them. We have to remember that Luke is a young trainer and Snoopy is a puppy. I do not want to rush this team. I would like to see each baby step be on solid ground before we ask them to take one more.” Another solid sign of Snoopy and Luke’s teamwork progress was seen last month when Snoopy began accompanying his young master to the weekly therapy classes. “Snoopy is behaving amazingly well – very calm, focused and attentive to Luke in those sessions,” adds Gonzalez. “We realize this is only the start of their long journey together but we’re very enthused.”

And, oh, by the way, Luke’s favorite piece to play on the guitar is “Ode to Joy” while Snoopy is snuggled alongside him with his tail wagging.