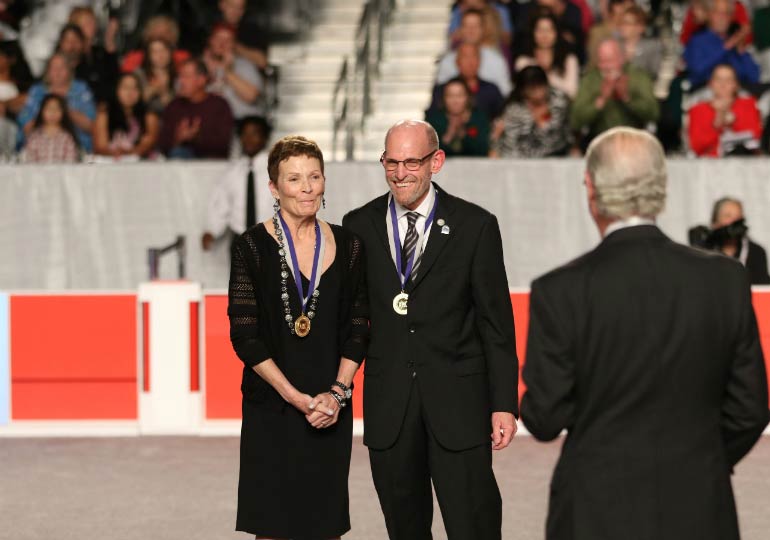 Alan Kalter and Dr. Chris Lezotte were presented with the 2016 AKC Breeder of the Year award for their HappyLegs Bullmastiffs at the AKC National Championship presented by Royal Canin on Saturday, December 17, 2016. The annual award honors those breeders who have made an impact on their breed and dedicated their lives to improving the health, temperament and quality of purebred dogs.

“We are proud to honor Alan Kalter and Dr. Chris Lezotte with the 2016 AKC Breeder of the Year award,” said Dennis B. Sprung, AKC President and CEO. “HappyLegs Bullmastiffs has been associated with top quality Bullmastiffs in the United States and their influence on the breed will be seen for years to come.”

One honoree is chosen from each of the seven groups: Sporting, Hound, Working, Terrier, Toy, Non-Sporting, and Herding. From those seven, one Group winner is selected as “AKC Breeder of the Year” during the AKC National Championship presented by Royal Canin, which was held this year in Orlando, Fla. December 17th and 18th. Presentation highlights are available on www.akc.org.

As the 2016 AKC Breeder of the Year recipients, Alan Kalter and Dr. Chris Lezotte will be honored with a commission from a canine portraitist to memorialize a prominent dog from their kennel and their names will be inscribed on a perpetual trophy, both of which will be displayed at the AKC headquarters in New York City.

Alan Kalter and Chris Lezotte acquired their first Bullmastiff in 1982. This exuberant male, while hardly a show dog, not only sparked Chris and Alan’s love affair with the breed, but his “happy legs” became the inspiration for their kennel name. Since obtaining their foundation bitch in 1984, Chris and Alan have bred or owned 160 titleholders; these include specialty winners, Best in Show winners, Westminster winners, top producers (they co-bred the top producing sire in the history of the breed) and five generations of group winners.

Alan and Chris have endeavored to give back to the sport of purebred dogs in a number of ways. Chris has served as secretary, Bulletin editor, and on the judges education committee of the American Bullmastiff Association; Alan is currently ABA president and the club’s AKC delegate. Chris is president of the Ann Arbor Kennel Club; Alan is past chairman of the American Kennel Club and a current AKC board member, is the AKC Reunite chair, and serves on the AKC PAC board. Most recently, Alan was elected to the boards of the International Partnership for Dogs and the Theriogenology Foundation. Beyond the purebred dog world, Alan and Chris established the HappyLegs Fund at the MSU Veterinary Hospital which provides financial help for those with dogs requiring life-saving care.

Chris and Alan are honored and humbled to receive this prestigious recognition. As they wind down their breeding program after 30 years in the sport, they hope to be remembered not for their dogs’ accomplishments, but for their efforts to incorporate soundness, structure, and “happy legs” into the Bullmastiff breed for generations to come.

All seven Group honorees were presented with medallions during the show on December 17, 2016. Group winners included: