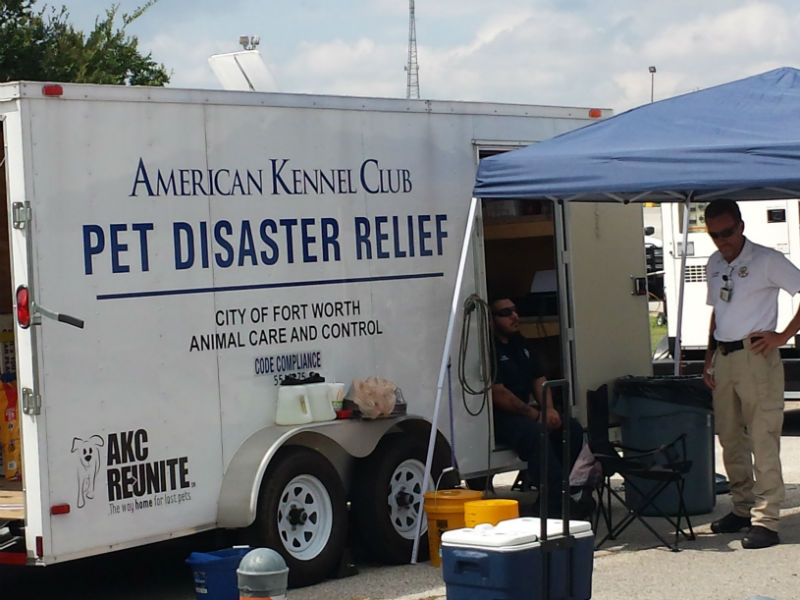 In wake of the devastation of Hurricane Harvey, two AKC Pet Disaster Relief trailers have been deployed to offer aid.

What The Trailers Do

Each trailer is fully stocked with non-perishable supplies to house at least 65 pets immediately after a disaster is declared. The trailers contain items such as: crates, bowls, leashes, AKC Reunite microchips, scanners, cleaning supplies, and even a generator.

Additionally, every trailer is donated with a library of training resources detailing volunteer coordination, how to set up the contents, decontamination, and replenishment of supplies.

The trailer is donated to an emergency management organization, who is then responsible for deploying it in an emergency. In the event of a disaster, (or evacuation due to a pending disaster) the trailers can be deployed to a predetermined location and a temporary shelter can be set up. This way, members of the community don’t have to risk themselves for their pets or lose their pets during a disaster. The trailers can be used outside of their county, region or state if the emergency officials in the affected area requests the assistance.

“[The program] really is special,” AKC Delegate Pat Laurans says. “It’s grassroots. It’s people to people and people to pets. It’s just one example of what the American Kennel Club does for dogs in general and people who love dogs.”

According to AKC’s Fort Worth Kennel Club Delegate, Harold Tatro III, the Forth Worth site will be housing any pets brought up from Houston and South Texas. Tatro also described the process of accepting people and their pets to the site:

See pictures of the trailers assisting at the Fort Worth site below.

For more information on Hurricane Harvey, click here. This page is constantly being updated with new information.