Mastiff vs. Bullmastiff: How to Tell the Difference

There are many large, muscular dog breeds. And several have droopy, drooly flews. But can you tell them apart? For those unfamiliar with the breeds, the Mastiff and the Bullmastiff in particular can be tricky to distinguish. Read on to learn about these two formidable protectors.

According to Diane Collings, two-time Past President of the Mastiff Club of America and current Judges Education Mentor/Presenter, when she’s out with her Mastiffs she’s frequently asked if she’s walking a Bullmastiff. “I think that maybe they assume due to the use of ‘bull’ it must be bigger, and it seems that the name Bullmastiff is more known to the general public.”

Sherry Boldt, a breeder and owner-handler of Bullmastiffs for over twenty years, has also experienced the public’s confusion. As a former board member of The American Bullmastiff Association and the current Microchip Chair, Boldt believes, “Many people use the generic term ‘mastiff’ for both breeds.”

Mary Lynn Speer, the Mastiff Club of America’s Judges Education Steering Committee Chair and AKC Breeder Judge, explains that the Mastiff is an ancient breed. It was first pictured on a bas relief dating back to 2,700 B.C.E. “They have a bloody history used as war dogs, and for bull and lion baiting as far back as the Roman arenas and as recently as 1835 in England for dog fighting.”

“In the past they were bred for size, loyalty, and intelligence,” says Speer. “They were tasked with doing just about everything, pulling carts, protecting estates, taking down big game, fighting alongside or in front of their master, and always general guard duties.”

In 1500, the English began to develop the breed we see today, creating a dog they released at night to protect the estates and castles. But poaching was an expensive problem, so by about 1860 the gamekeepers decided they needed a different sort of dog.

Boldt says, “The gamekeepers combined the more ferocious (at that time) Bulldog with a more mellow, but slower Mastiff, resulting in the Bullmastiff which served the needs of the gamekeeper very well. The dog could track a man in the forest at night; work quietly; and, when close enough, spring to a hard charge, knocking the man down and holding him there until the gamekeeper arrived.”

Although the Bullmastiff is smaller in all respects, the two breeds share an overall structure and outline. Boldt says both are powerfully built dogs with long tapered tails, large heads with v-shaped ears, dark eyes, and dark masks and muzzles.

Speer adds, “Both have broad square heads with short muzzles, short coats, and strong muscular bodies with heavy bone. Both breeds are the same colors: brindle, fawn, or apricot (red in Bullmastiff).”

On the other hand, the Bullmastiff breed standard sets the weight for the dogs at 110 to 130 pounds for males and 100 to 120 pounds for females. The profile is different as well. Boldt says Bullmastiffs are nearly square in body appearance. “I think the standard sums it up well that a Bullmastiff is a symmetrical animal, showing great strength, endurance, and alertness; powerfully built but active.”

Collings, an approved judge of both breeds, feels the characteristics that make the Mastiff unique are the rectangular profile, heavy bone, prominent breastbone, and great depth of body that give the Mastiff its massive, imposing appearance. “They are a quiet and dignified breed that moves with power, strength and surprising grace.”

There are differences in personality too. According to Boldt, who actively supports two Bullmastiff rescue groups, “Bullmastiffs are possessive, territorial, loyal dogs with an innate sense of who does and who doesn’t belong on one’s property. They seem impelled to stop intruders yet are (or certainly should be) more than willing to accept those people accepted by their masters.” 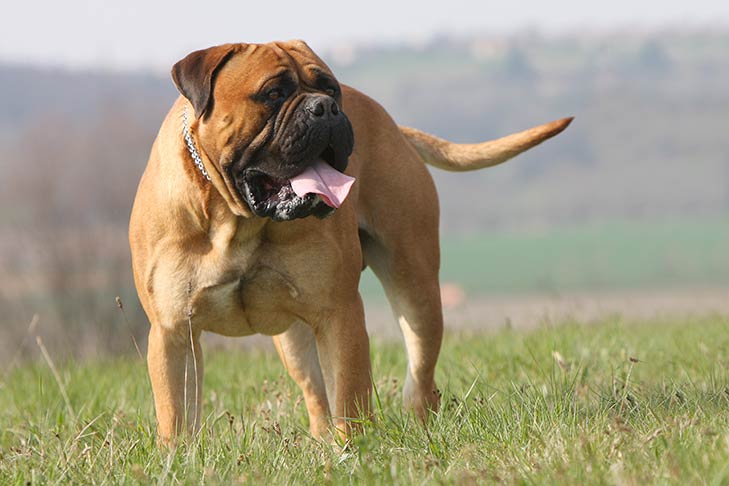 Bullmastiffs don’t require an intense amount of exercise either, although they will work for you. Thanks to their poacher-catching heritage, many enjoy dog sports such as Obedience, Agility, Rally, or Tracking. But they are also quite happy to guard your sofa or bed. Be aware these dogs can pick up new behaviors quickly. Boldt explains, “Generally, Bullmastiffs don’t tolerate consistent repetition in training. If they get it right in a couple of tries, they don’t understand the need to keep repeating that exercise.”

Mastiffs are more laid back than Bullmastiffs as well as slower and less agile. Speer says where the Bullmastiff exceeds at sports like agility, the Mastiff does best with more relaxed sports. “I always tell people that Rally was AKC’s gift to Mastiffs. Our dogs love to be talked to or communicated with, so they exceed at Rally where we can cheerlead them throughout the course.”

Mastiffs are happiest when they are with their people. If you give them work, they will happily do it with you but are also content to lay on the couch or at your feet. In Speer’s opinion, they are the best companion you will ever have. “There is nothing warmer than a Mastiff laying on your feet on a cold winter’s night. There is nothing sweeter than when that huge head gives you a tiny soft little kiss on your cheek. There is no safer feeling than sleeping with a mastiff in your house.” 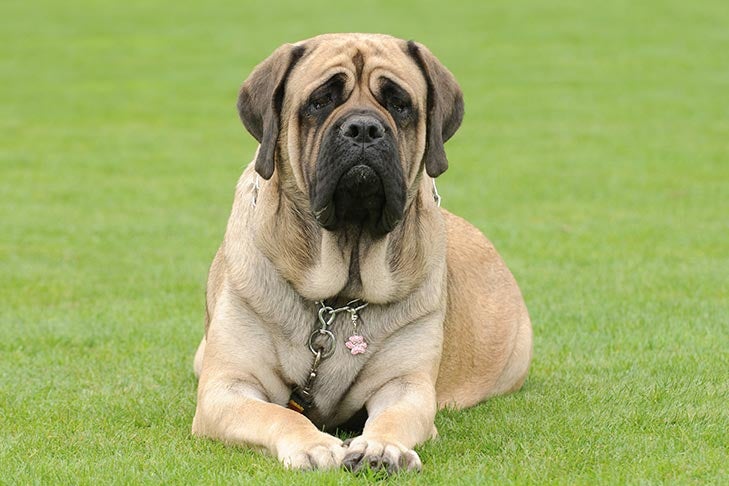 Both Dogs Are Natural Protectors

Although the Bullmastiff will jog or run with you, and the Mastiff prefers a leisurely walk, the two breeds share traits. According to Collings, Mastiffs and Bullmastiffs need early socialization and obedience training to be well-rounded family members. “It is absolutely imperative that you buy from a responsible breeder who not only makes health a priority but temperament as well.”

In addition, Speer says both breeds are natural guard dogs that form strong bonds with their families and need to live indoors with them. “They are intelligent, food motivated, affectionate, eager to please their favorite people, and can be aloof with strangers.”

And the similarities don’t end there. Both gorgeous dogs are droolers. However, the Mastiff, with their larger and longer flews, wins the drooling contest. And Collings can attest to the fact that they are both awesome snorers. But the loyalty and companionship of these dogs are well worth a little snoring and a whole lot of drool.

Related article: How to Tell the Difference: Italian Greyhound vs. Whippet
https://www.akc.org/wp-admin/admin-ajax.php
Get Your Free AKC eBook