How to Tell the Difference: Italian Greyhound vs. Whippet

No doubt you’ve seen a Whippet or Italian Greyhound. These absolutely adorable dogs look like Greyhounds that have been blasted with a shrink ray. Thanks to their size, it’s easy to see that they are not actually Greyhounds, but the trickier question is how do you tell these two breeds apart? The larger Whippet is a member of the Hound Group and the smaller Italian Greyhound (IG) is a member of the Toy Group. However, just like their larger cousin the Greyhound, the Whippet and the IG are both Sighthounds, so they share lithe and graceful physiques as well as a lightning-quick instinct for pursuit.

Christy Nelson of Runners Whippets is a second-generation Whippet breeder with experience breeding IGs as well. She’s also licensed by the American Kennel Club to judge both breeds in conformation dog shows. She says people used to confuse the smaller breeds with the Greyhound.

“Back in the ’70s and ’80s we would hear ‘I thought Greyhounds were bigger.’ But with the information highway and spectator attendance at dog events, more and more know about these two lovely companion breeds.”

Nowadays the confusion is more likely to be between the IG and the Whippet. And it’s no wonder. Without a point of reference to indicate relative size, these breeds look very much alike. Nelson describes the size division as the condo dog (the IG), the house dog (the Whippet), and the ranch dog (the Greyhound).

“All three breeds do well with lots of space, but as your area (home and yard) gets smaller, so should your breed choice.”

There have been Greyhound-shaped dogs for thousands of years. From Egyptian tomb paintings to Middle Age tapestries to Renaissance art, there have been sleek dogs that we would classify today as Sighthounds. These dogs were used to hunt in the open field, where speed was needed to catch the prey. Unlike scent hounds, dogs like the Beagle and the Grand Basset Griffon Vendéen, who hunt by tracking their prey by smell, the Greyhound, Whippet, and IG were valued for their ability to run swiftly run to catch their quarry.

However, Nelson says there is a lot of controversy when it comes to the history of the breeds as we know them today. They were appreciated for the same attributes, but it’s impossible to say which breed came first. 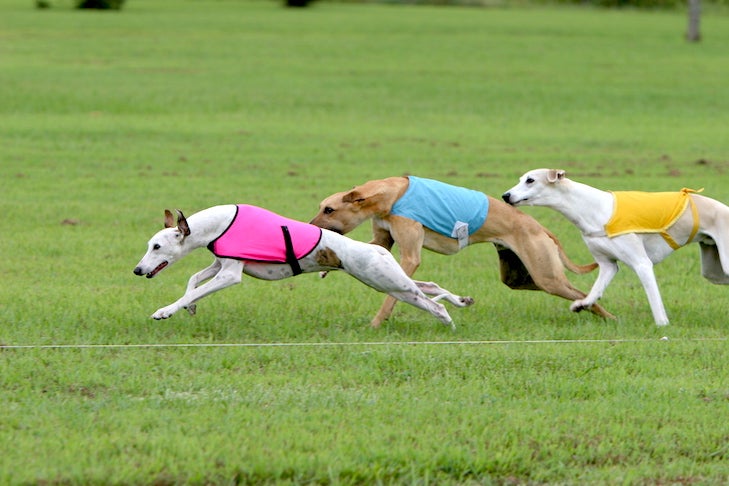 Thanks to their Sighthound heritage, both breeds share a lot of physical characteristics. For example, both are very clean dogs with short coats that are easy to maintain. And Nelson states that not only are they beautiful and elegant, they are also energetic. These are dogs that love the outdoors and related activities like running, playing, and hiking.

Nelson emphasizes the IG’s fine-boned and artistic appearance. They are 7-14 pounds versus the Whippet’s 25-40. But she says not to let these lapdogs fool you into thinking they are too delicate for physical pursuits. They are natural athletes and want to be out and about with their humans.

Whippets are equally athletic. She describes them as having a face that will melt your heart and convince you to give them the moon, but also, as the perfect medium-sized dog that’s easy in the house and car. They are equally happy to hike, jog, hit the beach, or play in the snow. They are also great partners for dog sports.

“I have trained Whippets in conformation, obedience, agility, barn hunt, dock diving, and coursing. They love it all.” 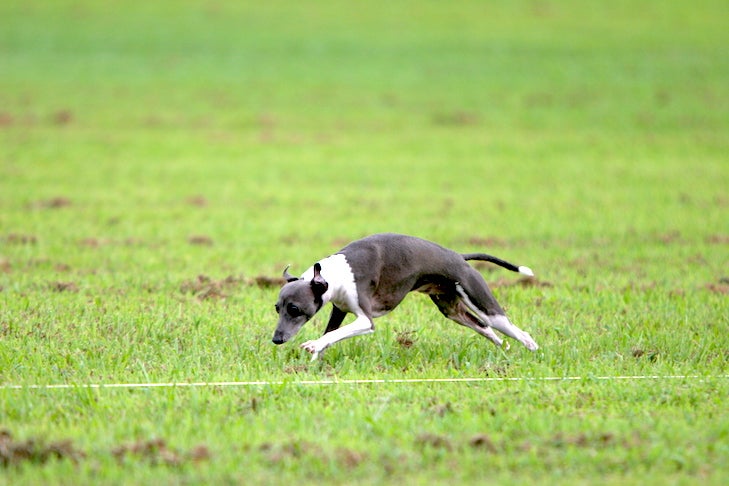 Both the Whippet and the IG are intelligent, trainable dogs. And if you socialize your dog from puppyhood around people and other dogs, both Whippets and IGs are good with other breeds as well as seniors and children. These are cuddly dogs who will want to be with you on the couch or in bed. They will probably even join you under the covers at night.

Nelson instructs that both breeds need plenty of mental stimulation and physical exercise. If not, you can expect boredom and some destructive behavior. However, she believes the IG might have more energy than the Whippet. She describes the IG as a little wind-up toy and says they stay playful and whimsical puppies into adulthood.

Whichever breed you consider, the tiny IG or the medium-sized Whippet, be prepared for a dog that loves to alternate between bursts of energy and couch potato cuddle time. As Nelson says, they are both wonderful companions and a great addition to your household.