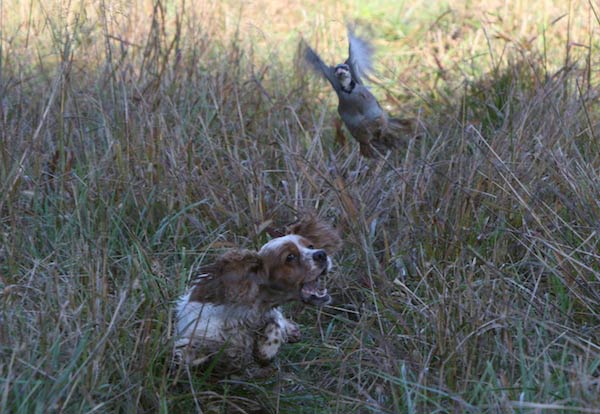 American sportsmen used Spaniels for hunting game birds and waterfowl long before there were Spaniel field trials. The Cocker Spaniel, recognized by The Kennel Club of England in 1892, had no trouble gaining stature in the United States as a hunting dog. The breed even had a sponsoring club early in the game-the American Spaniel Club, a strong organization founded in 1881, which eventually took all the hunting Spaniels-the Clumber, the Sussex, the Irish Water Spaniel, the Field, and the Springer Spaniel-under its wing.

The first stakes for Cocker Spaniels were held at Verbank, New York, in 1924 by the Hunting Cocker Spaniel Field Trial Club of America, a club that was largely the creation of Mrs. Ella B. Moffit, a well-known sportswoman from Poughkeepsie, New York.

The name Hunting Cocker Club was changed to Cocker Spaniel Field Trial Club of America and the catalogue of its trial on October 28-29, 1931, shows that the judges were David Wagstaff and Captain Paul A. Curtis. Other luminaries of the Spaniel world who officiated as guns or stewards included Ralph C. Craig, Henry Ferguson, Elias Vail, Dr. Samuel Milbank, and H. E. Mellenthin, breeder of Dual Ch. “My Own High Time” and of the famous “My Own Brucie.”

The English Springer Spaniel breed, which had become eligible for AKC registry in 1910, started to gain in popularity as an effective hunting dog in the early 1920s, ever since Freeman Lloyd, a respected gundog journalist of his day, wrote glowing of this “rare” new breed’s ability as a hunter and a retriever.

There was never any conflict between the Cocker people and the Springer people. From the beginning, trials held by the Cocker clubs included stakes for Springers. Likewise, Springer clubs throughout the country held Cocker stakes, and American and English Cockers competed in the same stakes without breed distinction.

Field trials were the perfect showcase for the Springer. The first field trial for Spaniels in the United States took place in late 1924 at Fisher Island, New York.

There was always a “bench show,” or conformation judging, held in conjunction with the early trials at Fishers, and it was judged by a show judge. This was dropped in later years, but there still exists the Horsford Dual Challenge Cup, presented in 1926 by William Humphrey of Shrewsbury, England, for the “Best Looking, Best Working Dog” in the trial. The trial judges now select the winner. Other inpressive trophies of long standing are the British Challenge Cup and the International Gun Dog League of England Challenge Cup.

For over thirty years the game little Cocker Spaniel had become the darling of the dog-show world, where in misguided innocence, the natural hunting instincts of most Sporting Breed dogs are bred-out on the notion that function follows form. With no pool of Cockers having functioning genes available in America for breeding, the Cocker became a modern day, field-trial dinosaur-another man-made, huntless sporting dog.

The following additional milestone dates have been important in the development of field trials for Spaniels in America: