How to Teach Your Kids to Train the Dog 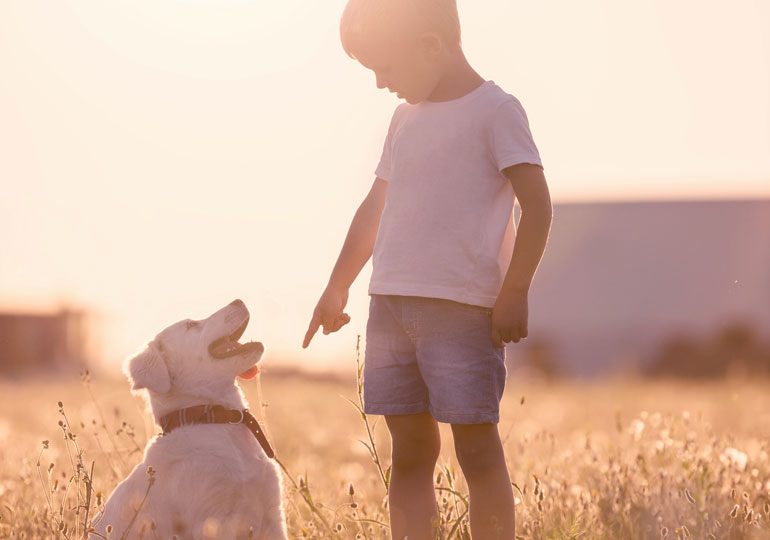 Sometimes the biggest challenge in dog training can be preventing a well-meaning family member from sabotaging the process. In some respects, teaching people how to train their dog is the equivalent of asking them to be the student and the teacher at the same time.

And because consistency is key with dog training, it gets even more complicated when there are several people in the household. That’s why it’s important to include the children (and your spouse, for that matter) in every step of the process and to make sure everyone is following the rules in regard to training.

Let them be involved. I once had a student who wouldn’t let her kids near her puppy that would be competing in obedience. The children weren’t even allowed to talk to the dog because she didn’t want them to “mess up the training.” Personally, I found that including my kids in the training process brought us closer together as a family. A child as young as 5 years old could understand how to ask a dog to sit before giving him a treat. And since you’re never leaving your young kids and dogs alone together without parental supervision, you’ll be able to help him follow through on training properly.

Turn your back on jumping. Teach everyone in the house and regular visitors that when they approach your dog while he’s in a pen or behind a gate and he jumps up, they are to turn their backs to him. After the dog has settled down, they can turn around and see what his choice is. If he sits, they can give him a treat. If not, repeat the process. Also, by having your kids teach this technique to guests, they will see how challenging it is to convince other people to follow directions.

Give kids their own commands. Kids can be unpredictable and inconsistent, and it’s difficult to retrain a word after a dog has confused its meaning. That’s why I give my kids different words to train the dog. My dogs learn to come to me on the word “here,” and they learn to stay on the word “wait.” But I told my kids that they were going to train the words “come” and “stay.” That way, they wouldn’t use my words and would focus on theirs.

Teach children how to use treats and praise. It’s important that kids learn how to teach their dog that they are just as exciting as a treat. I remember having this conversation with my son when he was little. He said that the puppy only wanted to be around him when he was holding dog treats. I told him that I was going to let him in on a really important dog-training secret: In order to make this puppy want him as much as the cookie, he had to teach him to do something in order to get the cookie. So waiting for him to sit and then giving him a cookie (or opening a door or throwing a ball) made him just as valuable to the puppy, because suddenly he was the gatekeeper of everything the puppy wants.