Games to Exercise Your Dog’s Body and Mind 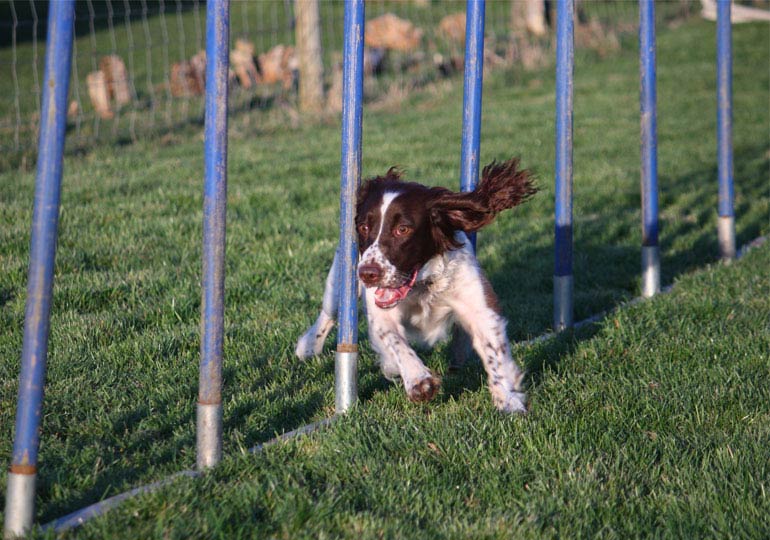 Recently, a student came to class complaining that she had taken her two-year-old Labrador Retriever for a three-mile run, then left to pick up her son from school, and when she returned home she found that her dog had shredded two couch pillows and was in the middle of chewing the leg off her kitchen chair. That same week, another student lamented that when she came home from the grocery store after finishing a successful 30-minute training session with her Rottweiler, she found that he had ripped up his new crate mat, then pulled the drapes off the window and into his crate, and was ripping them to pieces.

So what was the issue? Shouldn’t the Labrador have been physically exhausted and the Rottweiler mentally exhausted? Yes and yes. But the key to success is in wearing them out both physically and mentally. All it takes is a little planning. Start with playing these two games, and then try making up some of your own.

How to play: Taught as soon as a dog understands the concept of “sit,” Wild Sits begins by having the dog on leash while the owner runs around cheering, jumping up and down, and getting the dog riled up. (Note: If a dog is meek, afraid, or sensitive, tone the wildness down. The goal is an excited, not frightened dog.) Then, mid-romp, the owner will instruct the dog to sit. (This can be done with a treat if the dog is a puppy or new to training.) He probably won’t obey the first time or two, but after a little practice, he’ll be able to go from acting hyper to sitting patiently on command.

The benefits: Besides the cardio workout you and your dog are getting during this exercise, you’re teaching your dog to listen to you while he’s in a state of hyperactivity. How often has your dog gone nuts when the doorbell rings or when he sees people on the street and ignored your pleading for him to sit? Now you’re teaching him how to pull himself back into a responsive and obedient state of mind. How great is that?

How to play: Those who are familiar with the sport of agility know this exercise as weave poles, but any dog owner can teach her pet to do it as a way to have fun, work on coordination, and get a cardio workout. Simply set up “poles” using folding chairs, orange cones, unused toilet plungers, or even people, and instruct your dog to heel alongside you as you weave between them, changing your pace from fast to slow. Think of it as being similar to a slalom course in skiing.

The benefits: Your dog has to concentrate harder on following you as you quickly change direction. Also, because he’ll stay at your left side as you quickly weave left and right, he’ll have to adjust his pace to be slower and faster, respectively, which is what your personal trainer would call interval training. Add even more of a workout by running the entire course.

Try switching out one of your regular training sessions with these games. In addition to having a well-trained and well-exercised dog, you will also reap the benefits of getting more cardio. And while I’m not suggesting this can be an alternative to going to the gym, I am speaking from experience that by doing this, your relationship with your dog and with your own physicality will definitely improve by leaps and bounds.