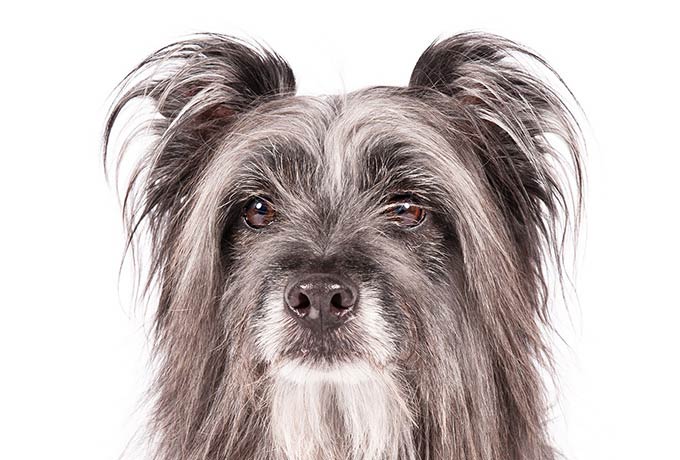 Starting to teach tracking skills at an early age can be a great way to build a puppy’s confidence, since he or she is in charge when it comes to finding a scent.

While I’ve watched how puppies enjoy tracking and grow in confidence as they realize they’re essential to this new game, I had never thought about the beneficial effects tracking work can have for an adult dog as well.

This past winter and spring I resumed tracking with one of our Pyrenean Shepherds, Speed. For most of his life Speed has suffered from anxieties, including discomfort in being near unfamiliar people, and we have spent much time on desensitization and counter-conditioning. He had improved in terms of being able to tolerate more environmental challenges, but he still had some distance to go when we once again took up training for the Tracking Dog Excellent (TDX) title.

As we worked through the complexities involved in training for the TDX (which entails a track at least three hours old, three articles, more length, cross-tracks to ignore, and obstacles of different kinds, among other difficulties), Speed became more and more skilled at solving the problems. I enjoyed watching his skills improve and seeing him concentrate, but I had no idea that something else was changing at the same time.

We made it into a TDX test in May, and Speed started his track with authority and assurance—as businesslike as I could have wished, despite three strangers (the judges) following close behind him, and a small group of onlookers. He crossed a ditch, went under a fence, barely blinked at his first set of cross-tracks, and indicated his first interim article with nary a glitch.

Unfortunately, his errant handler remembered a much less trustworthy and younger Speed. I let him down by assuming what no handler should: that I knew more about the job than my dog did. I simply did not give him credit for all the information that he had absorbed.

Once I was set straight, he completed his track with no need at all for human help—mine or the track layer’s—and it was obvious to all the observers that he knew exactly how to do his job, provided the biped behind him didn’t get in the way.

However, it turned out that I had not taken into account something even more important. Solving all those problems over months of training, and each time we worked taking charge of figuring out where the track went—whether through water or woods, up hill or down—had had a huge impact on more than my smart little dog’s tracking skills alone. His confidence in his ability to solve complex scent-problems had increased his belief that he could cope with the world around him.

This delightful revelation about the new Speed came when he found the glove at the end of his TDX track. I praised him exuberantly; he was ready to go right on tracking, and he ignored the tracklayer and bounced around happily as she came up behind us. As the four judges came up to talk about his track, Speed ignored them, too—still as cheerful as could be (by now he was eager to get his juicy chicken reward back at the car). Before our recent work, he would have been very nervous to have several strangers within a few feet of him.

This time, he was unfazed. So, if you have a worried older dog, think about the possibility that a quiet, complex job like tracking might make a difference!

VIDEO of a German Shepherd completing her TDX test: