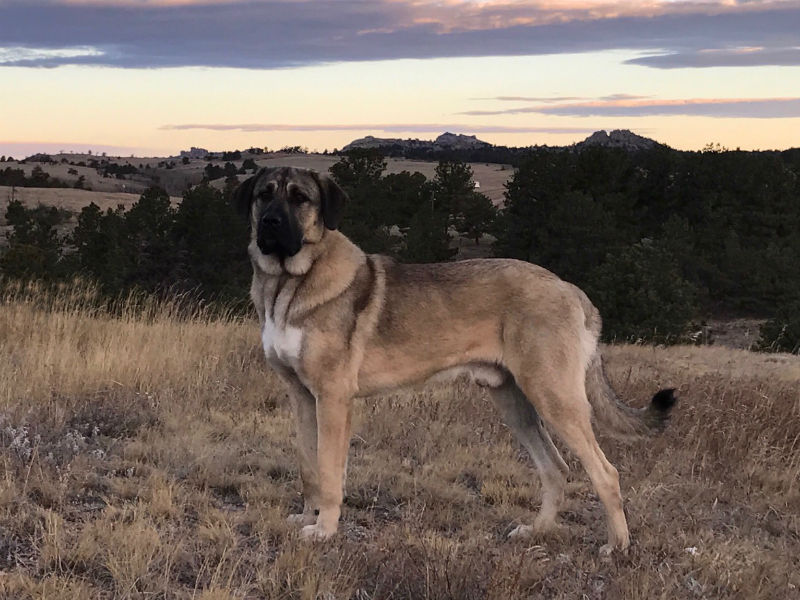 Puck poses for a photo in Wyoming en route to the 2016 Anatolian Shepherd Dog Club of America National Specialty in Pleasanton, Calif. That 6,400 round-mile road trip was the longest time he has been away from home.

His Australian breeders named him Puck, since each puppy in his litter carries a moniker for a fairy. In English legend, this was the name of a mischievous spirit, also known as Robin Goodfellow, who appears in Shakespeare’s work, a “Midsummer Night’s Dream” (1600).

But rest assured, there’s no fairy-like resemblance in this 2-year-old, 155-pound Anatolian Shepherd Dog that doubles as a show dog and 24/7 stock guardian on the 80-acre Auburn, N.H., ranch of Gary and Heidi Krol.

Make no mistake about it, Puck is your consummate working dog and protector of 20 Nigerian Dwarf goats and 10 LaMancha goats, two breeds used for milking. He also keeps an eye out for threats to the resident ducks, chickens, Guinea hens, and geese. The farm is also home to a few horses, barn cats, four Australian Cattle Dogs that assist in moving livestock about the farm, and 10 other Anatolians.

“My husband and I have owned Anatolians for almost 22 years,” says Heidi Krol, 41. “We currently own 11. Since importing Puck, we have brought in three more, two from France and one from Scotland.”

She explained Puck’s backstory. “We have a beautiful female, Kaya, originally from Texas. We began searching for a quality male with which to breed her. We wanted a larger dog with more bone to breed back into our lines. After a year of searching the U.S., I wasn’t happy with what we were seeing. I began searching social media worldwide and came across Tribocie Anatolians, owned by Ekin and Ash Esad, near Sydney, Australia.”

At 6 weeks of age and still in Australia with his breeders, Puck already had his game face on, i.e. his guardian expression.

“I immediately knew their dogs were the type I had been searching for and was even more thrilled to find out their stock had strong working genetics. I fell in love with Puck and hoped they would agree to sell him to us.”

Well, they did, and young Puck was sent on a 30-hour trip — three flights — to Boston, where he was greeted by the Krols.

With Puck, the Krols were seeking genetic diversity for their own breeding program and for the entire breed in the U.S. “Our focus is always on the working genetics. Without it, Anatolians are just another pet,” says Heidi Krol. The lack of diversity in the U.S. has prompted smaller size offspring and the loss of type and function.

“If you look at the breed standard,” she adds, “it has words like large, impressive, powerful, rugged, muscular, etc. We are seeking to preserve that.”

Puck personifies that standard, and he is the couple's first show dog. In the process of competing, he has wasted no time in putting his footprint in the Anatolian Shepherd Club of America record book, taking the Winners Dog title at the breed’s 2015 National Specialty at just 6 months old (his first show), then 13 months later he became the youngest male to win the coveted Best in Specialty title at the 2016 national.

The transition from stock guardian to show-ring persona isn’t easy. Consequently, the Krols began socializing Puck immediately after he arrived on the farm, a stark departure from their modus operandi with previous newcomers. This included trips to the grain store and family outings. “It’s easy for a working dog to regress into full working-dog mindset without continued socialization,” she emphasizes.

Puck’s longest competition journey took him to Pleasanton, Calif., last year for the national specialty. The couple opted against crating him for a cross-country plane trip, so they bought a transit van for the 6,400-mile, 12-day round-trip journey, which included several touristy side excursions.

While the 2017 Westminster Kennel Club Dog Show in February didn’t pose the same travel demands, it served up plenty of other challenges — namely the noise inside the Piers (where breed competition was conducted) and the surrounding Manhattan traffic, the antithesis of Puck’s normal environment.

The bulk of Puck’s show outings are in the Northeast, often simply day trips from the farm. “Ideally, I like to be away from home no more than one to two days,” Heidi Krol says.

For Burrell, the handling challenge is to make this workman look like he enjoys being in the ring. “Though the standard calls for an aloof temperament, we know that happy, waggy-tailed dogs draw the judge’s eye more readily. [Since he is] a working Anatolian, I am prepared to always be on guard showing Puck,” she says.

Puck has what Burrell characterizes as “an ideal temperament” for the breed, meaning he is strong-willed but not overly aggressive. “Unless something poses a threat to him or to what he considers his flock — his goats, his family or me — he sees no reason to react. He is laid-back and low key. When I run with him, I can feel him grabbing the ground and pulling it underneath him. Puck would find showing boring if it were all about standing still. His incentive lies in the chance to move freely, covering large amounts of ground with little effort and then receiving the rewards of a happy family and tasty bait.”

Preparing Puck for the show ring was initially a challenge for Burrell. Judges prefer dogs that smell clean, not of goat, she says, hence Puck was introduced to bathing 101. “He quickly decided water and soap were not for him. Because of his strength and self-confidence, he is not a dog you force into things. So training for grooming involved some bribery and lot of massage with the show nozzle, plenty of towel drying, a slow introduction to a universal-level dryer, and loads of patience tossed in,” Burrell reflects.

Traveling with Puck is not without its challenges either. A crate isn’t his idea of fun, for how can you protect from there? Burrell coaxes him in with cookie bribery. On long trips, she says, he must ride loose or he will stand in the crate the entire journey and be tired and sore when they reach their destination. At show venues, he prefers to lie in front of his crate to better interact with his fan club.

Puck’s future 2017 show campaign schedule is a bit uncertain right now. He is, however, about to be a dad. A litter sired by the 2-year-old is expected in July.

Quality time with the kids in the barn beats the outside heat and bugs. Hence the Krols know where to look for Puck if he’s not readily spotted outside.

So what led this couple to the breed, which ranked 84th on the AKC’s 2016 popularity list?

Gary Krol, 51, an “Army brat” (that’s Heidi’s characterization) spent some of his childhood in Turkey, where the breed originated. Upon the family’s departure to the U.S., his father, an Army colonel, was given two Turkish Shepherd Dogs to take to their farm in Massachusetts. Some two decades later, when Gary and Heidi married and needed a guardian breed for their farm animals, Gary’s priority was an Anatolian Shepherd Dog (the name given to Turkish Shepherds in the U.S.).

All of the couple’s Anatolians are working dogs, divided into pairs and trios, each group of which is responsible for guarding stock in a designated fenced acreage. “Typically, we have male and female pairs, as they tend to be most compatible,” explains Heidi Krol. “Some pairs are with baby goats, some with male goats, and others with the milkers. The birds are free range and guarded by three of our females.”

Puck’s role is to protect the Nigerian Dwarf milkers. Typically, Anatolians find a spot to lie down and overlook the pasture throughout the day. They are most active at night when the predators — chiefly coyotes (coywolves), which breed with wolves in Canada — pose threats. Coywolves are larger than the average coyote, most weighing about 40 pounds. There are several packs, according to Heidi Krol, that live on conservation land surrounding their farm. Other predators testing the Anatolians’ resolve are fox, raccoon, opossum, bear, fisher cats, and weasels.

On a frigid New Hampshire December morning, Puck keeps a close eye on the young does.

“Puck allows the females to do most of the work,” laughs Heidi Krol. “The females work the fence line and investigate anything they hear or smell. When Puck barks, we know a threat is imminent.”

A serious working dog, he has effortlessly cleared a 6-foot woven stock fence to run off or challenge a predator. Puck lives outside 24/7, at his choosing — and like the other Anatolians has access to the barns. “When the temperatures dip into the minus digits, we force them into the heated part of the barn or the house,” she adds. “But they are truly miserable indoors.”

Puck’s resiliency between show and field has had its transitional rough edges, but for the Krols this “fairy-tale” adventure has been a sobering affirmation for prioritizing genetics and character.