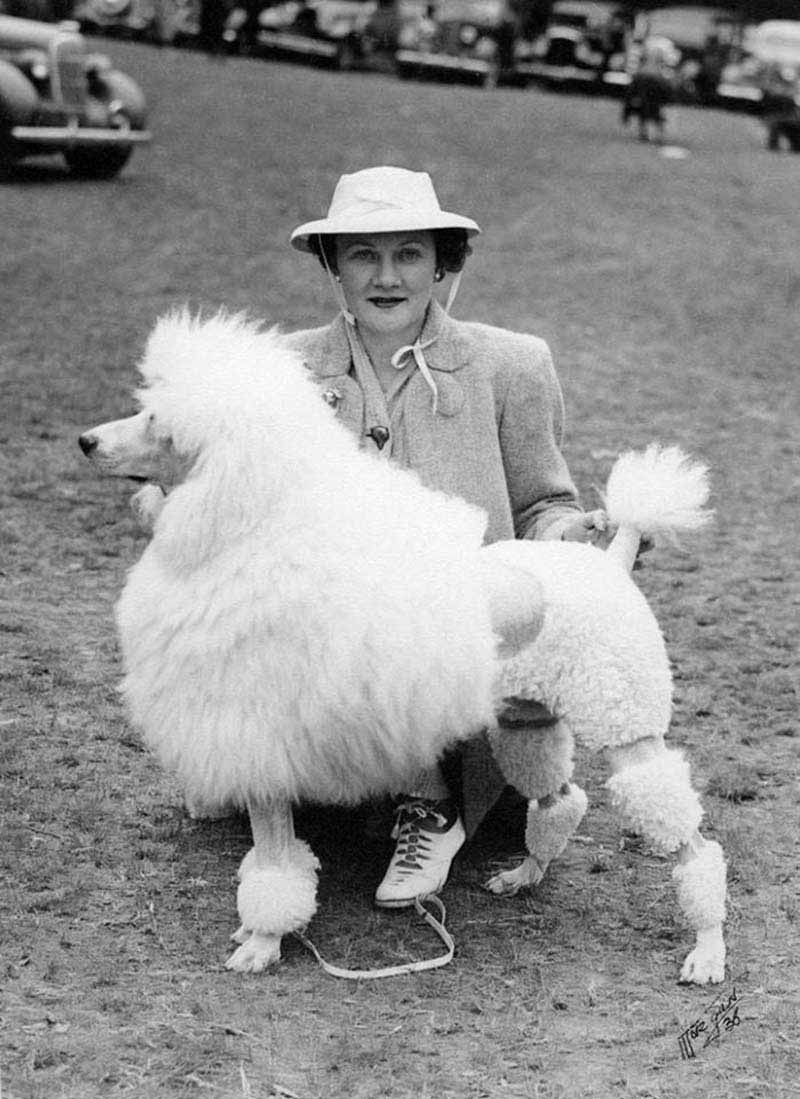 Standard Poodle Ch. Blakeen Jung Frau
was from the famous line of Poodles owned by Hayes Blake Hoyt,
a woman who lived the word “elegant” in and out of the show ring.

Jung Frau’s breeding was impeccable. Her father was legendary Swiss import Duc, 1935’s Westminster winner. In 62 shows entered, Jung Frau won the breed 42 times and took 19 Bests in Show. And when teamed with her handsome brother Blakeen Eiger, she was a force in the brace ring.

Jung Frau can be seen as a mascot for the movement of American culture away from European influence. Since colonial times, America had an inferiority complex about the Old World. Americans deferred to their European betters in matters of fashion, literature, architecture, music, and other aesthetic pursuits. American originals like Mark Twain and Frank Lloyd Wright were exceptions, not the rule. Generally, Americans who aspired to a certain degree of refinement looked to Europe for guidance.

The same was true in dogs. Imported champions of many breeds dominated U.S. show rings in the first half of the 20th century. Wealthy owners of Mrs. Hoyt’s time employed agents to scour Britain and the Continent for importable show dogs. The outbreak of World War II changed the equation. With Europe at war, the pipeline of imports to America dried up. Many European breeders faced the grim choice of slaughtering their dogs or watching them starve to death. Europe was out of the dog game for the duration. American breeders would go it alone.

In late 1940, on the muddy, rain-swept grounds of the Morris & Essex show in New Jersey, Mrs. Hoyt handled her American-bred Jung Frau to Best in Show over an entry of 4,087 dogs, including many top imports. A year later America entered the war. When the smoke cleared, Europe was in ruins and Americans from all walks of life were getting used to the idea of being leaders instead of followers. —Bud Boccone; photo: Bert Morgan, AKC Gazette collection

For more on Mrs. Hoyt and her Blakeen Poodles, see “The Toast of Blakeen”