A long life is the result of good genes, good care, and good luck. While a few four-leaf clovers never hurt anyone, chances are it’s a little late to worry about good genes once you’ve welcomed a dog into your heart. That leaves good care as the one thing you can control now. And a big part of good care is good nutrition.

However, there are issues when it comes to feeding your senior dog. Neither the Association of American Feed Control Officials (AAFCO) nor the National Research Council have determined official dietary requirements for aging dogs. It’s partly because senior dogs vary so much in their individual needs. That may explain why commercial foods for seniors vary so widely in nutrient levels.

Nobody expects you to be a nutritionist just to pick out a bag of dog food. But you should be aware of just a few important factors that apply to most senior dogs. This will help you choose the best dog food for your senior dog.

This matter is widely misunderstood. Many people still believe senior dogs should eat less protein. We now know the opposite is true. Healthy seniors need more protein, not less, in order to fuel muscle. Loss of muscle mass is a major problem in older dogs. Some seniors lose so much muscle they can no longer walk unassisted.

Older dogs need about 50 percent more protein to maintain muscle mass compared to younger ones. But, diets formulated for adult maintenance diets often don’t have enough protein to satisfy these needs. Veterinarian Ernie Ward, founder of the Association for Pet Obesity Prevention, recommends 28 to 32 percent protein on a dry-matter basis for healthy older dogs, especially in those cases where weight loss is needed.

Younger seniors tend to be overweight. But, very old dogs tend to be underweight. A 2011 study found that calories in senior foods varied widely, ranging from 246 to 408 calories per cup. So, the same senior food may be a great choice if your dog needs to lose weight. But it may be a bad choice if they need to gain weight. 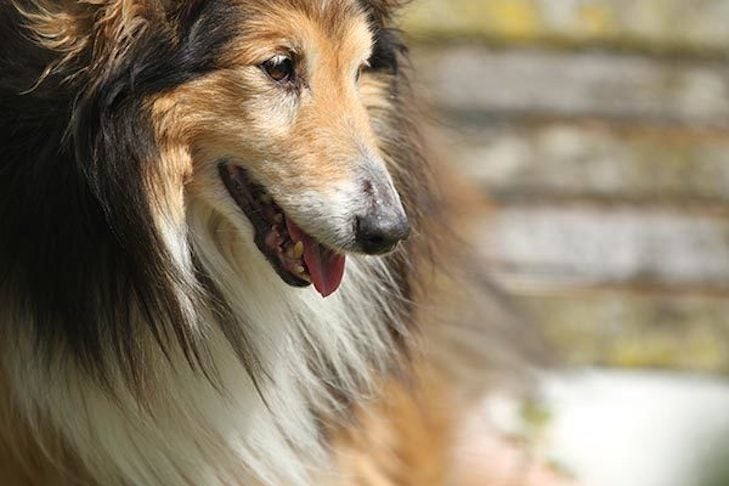 Other factors to consider are senior dog health problems such as heart and kidney disease. For both conditions, you’ll want a low-sodium food. But, that same 2011 study found that sodium levels in senior foods ranged from 33 to 412 mg/100 kcal. For kidney disease, you’ll want low phosphorous, but that’s not even mentioned on any label. The 2011 study found phosphorous levels varied by threefold in the senior foods they examined, but were on average higher than their representative adult maintenance food.

Prescription diets are available for heart, kidney, and other diseases that take into account these nutritional needs. However, even those foods may have wide ranges of nutrients. Any dog food manufacturer should be able to provide these numbers to you on their website or with a simple phone call. While you’re at it, ask them about the credentials of the people formulating their foods. If they can’t provide either, that’s clue number one that you should find another product.

Some senior foods include supplements such as glucosamine and chondroitin in an effort to combat osteoarthritis. Unfortunately, the evidence that these supplements actually work is limited. However, they won’t hurt—except maybe your wallet.

On the other hand, omega-3 fatty acids probably play an important role in senior diets because they may help combat both osteoarthritis and especially cognitive losses. If you are adding your own to your dog’s diet, aim for the amount of EPA and DHA combined to be in the range of 700 to 1,500 mg. Build up starting at the low end and cut back if your dog has any diarrhea or vomiting.

There’s probably more to the recipe than simply EPA and DHA, however. Research conducted at Purina tested Beagles between the ages of 9.5 and 11 years of age that were fed either a standard diet or one supplemented with antioxidants, B vitamins, fish oil, and L-arginine for six months. The dogs fed this “Brain Protection Blend” performed significantly better on a series of mental tasks, especially the more difficult ones, compared to the dogs not receiving the blend. The tasks involved determining which one of several shallow wells contained food when the cue was a marker either next to it, near it, or displaced at an angle; or seeing how well they did on a task requiring them to discriminate right, left, and center, and then relearning which side was correct in order to receive a reward. 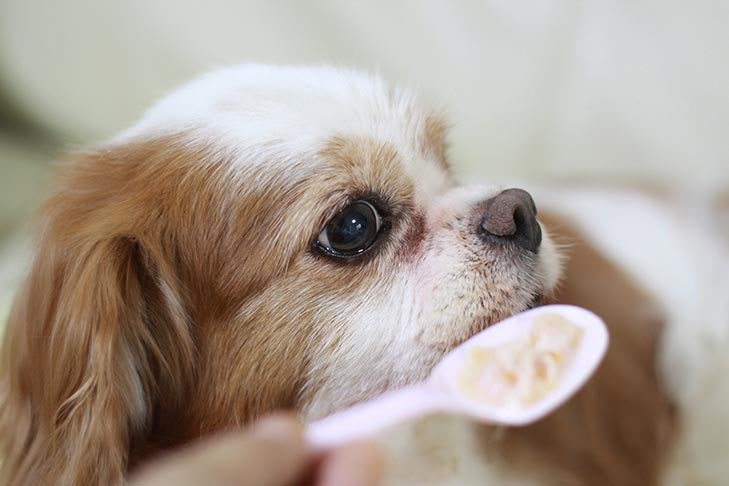 There are practical aspects of feeding your dog to consider, too. Senior dogs may have dental problems that make chewing difficult or uncomfortable. These dogs should first be treated for whatever problem they have, but if that is impossible or unsuccessful, consider wetting their food or feeding them canned or soft food. Simply feeding a smaller kibble size may help if you’re feeding dry food.

Senior dogs may be uncomfortable bending down to the food bowl or standing for long periods to eat. Try serving their meals on a raised platform or encourage them to eat lying down.

Very old dogs often lose their appetite. Warming the food can increase its aroma and may help stimulate the appetite; cooling it may make it less nausea-inducing in queasy dogs. At some point you may have to abandon your goal of a healthy balanced diet and just feed him whatever he will eat. The “wait until he’s hungry enough” tactic doesn’t work in seniors because their “hunger mechanism” may not be working correctly. Besides, it’s a little late to be worried about spoiling him—and even if you do, doesn’t he deserve it?

This column first appeared in the September/October 2019 issue of AKC Family Dog magazine.