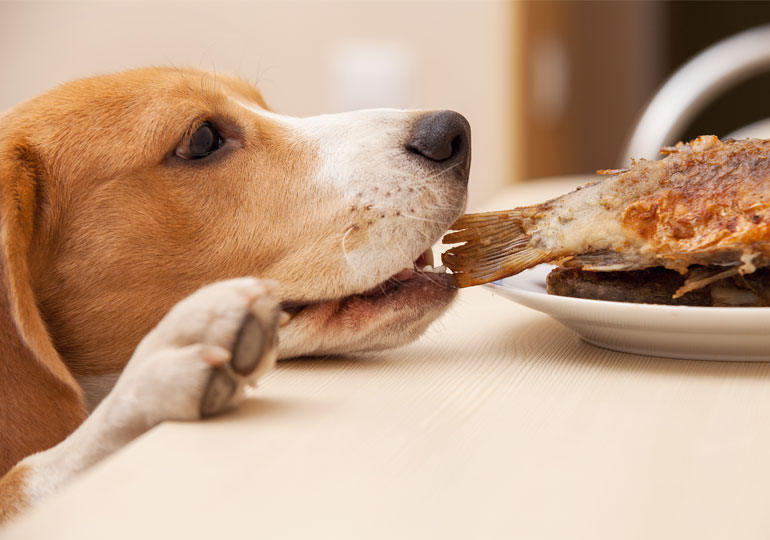 The Food and Drug Administration has just confirmed what veterinarians and dog experts have been saying for years: Be wary of feeding your dog certain “human” foods.

On July 27, the federal agency released a warning to pet owners advising that some seemingly harmless foods can be dangerous—sometimes deadly—to our canine companions.

“Our bodies may break down foods or other chemicals that a dog’s can’t tolerate,” says Dr. Carmela Stamper, an FDA veterinarian.

The top foods to avoid, according to the FDA, are:

Raw meat: Red meat and poultry can contain harmful bacteria, like E. Coli or Salmonella, and therefore should be kept out of the reach of dogs. If your pet is prone to steal foods from a counter or grill (which carries the added risk of burns), make sure to confine him while he’s not supervised. Get tips on preventing counter-surfing here.

Grapes, raisins, and currants: Experts are not yet sure exactly what in these fruits causes a problem in dogs, but some canines experience acute kidney failure after ingesting them. Read more about why grapes are dangerous to dogs here.

Fried and fatty foods: In some dogs, just a few bites of a high-fat food can cause a painful, dangerous condition called pancreatitis, which occurs when the pancreas becomes inflamed, causing damage to it and surrounding organs. Once a dog has had a bout of pancreatitis, he’s prone to reoccurrences. Be safe and hold the fries.

Onions, garlic, and chives: The FDA advises owners not only to avoid feeding these foods directly, but also to keep foods containing large amounts of these ingredients (like salsa) out of the reach of pets. “Onions (and, to a much lesser degree, garlic) destroy red blood cells, causing a condition called hemolytic anemia (lack of red blood cells due to their destruction),” explains AKC Family Dog “Nutrition” columnist Caroline Coile. “When the red blood cell count gets too low, the blood can’t carry oxygen to the cells, the dog weakens, and can die.”

Salty snacks, in large quantities: “Feeding the odd potato chip or pretzel probably won’t do any harm,” Stamper says. But if your dog gets into a whole bag of them, he could get really sick.”

Macadamia nuts: They add texture and flavor to a white-chocolate cookie, but in dogs these nuts can cause, according to Coile, “severe lethargy, increased body temperature, vomiting, tremors, joint stiffness, and loss of limb control (especially hind limbs) for the next 48 hours.”

Xylitol: This sugar substitute can be found in sugarless gums, many sugar-free products, some household items, and even certain brands of peanut butter, and it is extremely dangerous to dogs. Small quantities can cause hypoglycemic episodes and lead to liver failure. Read more on why xylitol is dangerous to dogs here.

If you suspect your pet ate something that could make him sick, contact your veterinarian immediately or call the Pet Poison Helpline.