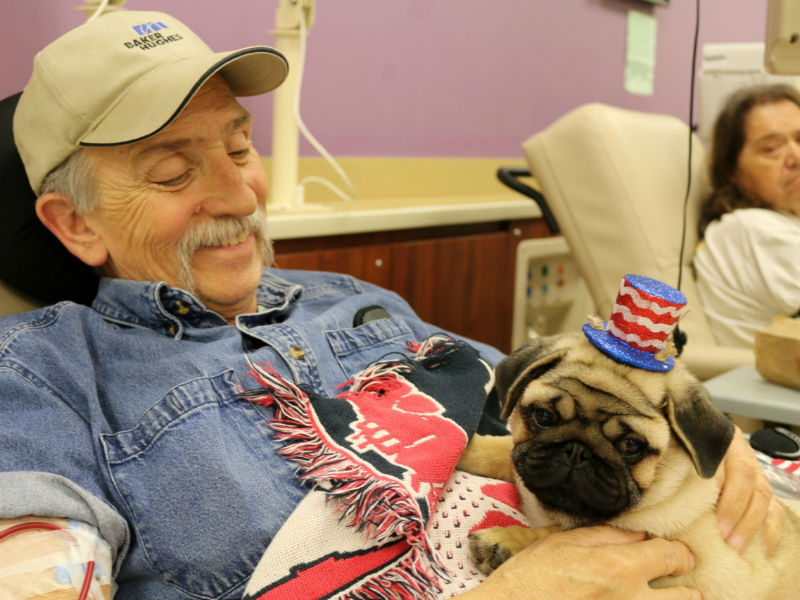 Shari and Kevin Curran have a very busy lifestyle in rural Texas, but somehow a charismatic Pug, named Lionel, has managed to become the centerpiece of their lives.

The couple, who live on 80 acres in Canton, Texas, 60 miles east of Dallas, own horses, miniature horses, a pot-bellied pig, alpaca goats, chickens, and, of course, dogs. 12 Golden Retrievers, 1 Bernese Mountain Dog and 5 Pugs. They have bred and shown Goldens for about a decade, with two of their dogs reaching top 20 status in conformation in the country in the past year.

But 1-year-old Lionel, a Pug born on Valentine’s Day 2016, has become one of their favorites — and he is also a favorite of the dialysis patients at U.S. Renal Care in Canton, where Kevin Curran is the medical director.

“We formed policies and procedures about two years ago and began bringing therapy dogs in at that point. We also allow puppies to visit on special occasions, such as holidays,” says Shari Curran, an occupational therapist who also manages the ranch and Lazy Paws Kennel. “It is great socialization for the puppies, and the patients receive a huge benefit, too.”

Lionel visits Brent Pickens, a dialysis patient at the U.S. Renal Care facility in Canton, Texas. The Pug is dressed up as a pirate for Halloween festivities.

Although puppies visit once in a while, Lionel’s Golden housemate, Gable, a Grand Champion, accompanies him regularly.

During each visit, Shari Curran takes photos of Lionel with the patient and prints several copies, which are given to the patient to take home. “Some family members have told us these are sometimes the only photos they have of their family member smiling during treatment. One family member even used the photo for the obituary,” she adds.

Patients are usually on dialysis for four hours. Once each is hooked up to the machine, Lionel heads over and is gently placed on his/her lap. “They are able to pet and cuddle him with the arm that is not being used for dialysis,” says Shari Curran. “When we visit with the patients, they often reminisce fondly about the pets they had in their past. Many of these patients now live in nursing homes, and they do not have access to a dog; consequently, Lionel’s visit is special. Usually, there are 10 patients on each shift, so it takes more than one hour to visit and take pictures. Then Lionel rests and returns for the remainder of the shifts throughout the day.”

Deb Warrington, a registered nurse and facility manager at U.S. Renal Care, says, “There are two important benefits from the dogs’ visits. First, many of the patients are very anxious about the needles and the treatment. When the dogs enter the room, their anxiety disappears, and they focus on something besides themselves. Second, many have uncontrolled hypertension. When the dogs are present, their blood pressure drops into the normal range and tends to remain there for the remainder of the treatment.”

For the Currans, Lionel and the Goldens are a natural fit at the U.S. Renal Care facility. Shari Curran was director of the Baylor Institute for Rehabilitation Animal Assisted Therapy Program in the 1980s. When she moved, she started a nonprofit animal-assisted therapy program in East Texas. Five years ago, the couple relocated to Canton, and Shari retired to finish raising their children, Taylor, now 20, and Haley, 19. Taking the dogs to the dialysis center is now the lone animal-assisted therapy she focuses on. “It’s rewarding for all involved –- the dogs, patients, and me,” she smiles.

So what was the Pug’s appeal to Shari after years in Goldens? “Our friends (Patti and Richard Caldwell, of Lavon, Texas) had shown Goldens, as well as Pugs. I met several of their Pugs at a show and fell in love with them. They have a great sense of humor and are very affectionate. I got my first one more than three years ago.”

Curran says the two breeds are incredibly compatible. “The Pugs love to snuggle in the Goldens’ hair, especially our male, Gable, which we call the ‘Pug magnet,’ because that is where you find the Pugs, especially on a cool day.”

When Lionel isn’t working his magic with patients, he’s running about the 80-acre spread and traveling to dog shows.

Right now, he’s on the show circuit with his handler, Dylan Kipp, of Houston. He is a Top 10 all-breed and plans call for him to compete in the Pug Dog Club of America National Specialty in Fort Worth, Texas, in late September. Curran is hopeful he will receive invites to the to AKC National Championship in Orlando in December and the 2018 Westminster Kennel Club Dog Show in New York City next February.

Lionel boasts that “it” factor judges love. Kipp characterizes it as “spunk and attitude. He is a character and entertains all who are watching him. He is just a big kid having fun, and as his handler, I have to contain this ball of energy so he continues to love the show ring but still performs well for the judges.”

During the week, Lionel is like any normal dog. His favorite parts of the day are breakfast and dinner, and he loves to run with the other dogs in the yard, adds Kipp. For extra conditioning, he goes on the treadmill.

And, yes, the resilient young Pug is a good traveler. “He is extremely laid back,” says Curran, “and loved New York City when he was shown at Westminster this year. He feeds off the crowd, and heaven knows, there were plenty there to get him going. He is like a little party animal. Always up for a good time.” On top of having fun at the iconic event, he made a quality statement, winning an Award of Merit and finishing his Grand Championship the day before he turned one year of age!

Whether his audience is hundreds, or even thousands at a major dog show, or simply a single dialysis patient, Lionel’s magnetism is a seamless blend between splash and substance. “He never seems to miss a beat,” Curran concludes, “and he has an uncanny ability for a young dog to turn it on when the occasion calls for it.”

Main photo: Another patient, David Free, is all smiles during Lionel’s visit on the Fourth of July.