Thrill Of The Hunt Test: Reflections From The Cocker Spaniel Club Of Georgia’s Event 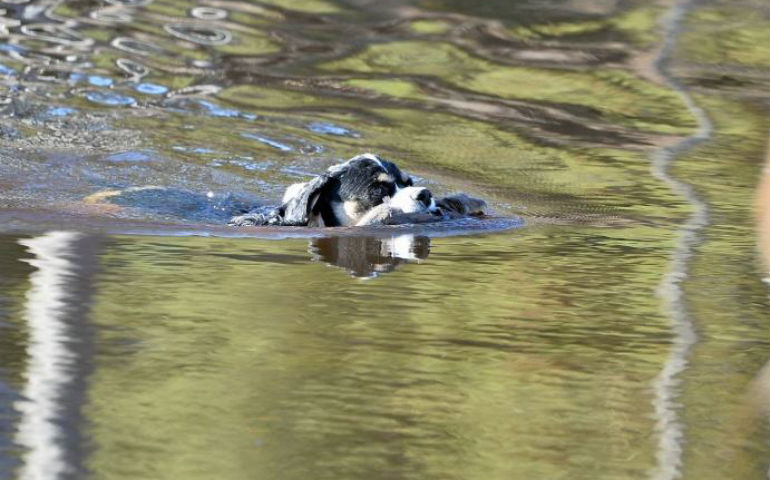 A Cocker Spaniel Club of Georgia member shares his experience in taking part in the club's hunt test in December.

The air is crisp and the sky is a rich blue with stars on one horizon and the sun trying to rise on the other. Trees and hedgerows line fields that are thick with tan stalks of bromegrass standing tall over frost covered ground cover. People in orange arrive and chat in small groups, steam swirling from their breaths. Dogs are at their feet, barely able to contain their exuberance. Planters move out across the field with their pouches full. Judges come forward with their clipboards in hand. Hunters with shotguns slung over their shoulders take up position on either wing. The 25th annual Cocker Spaniel Specialty Club of Georgia Hunt Test is underway!

The entry is huge – over 40 dogs – and requires two stakes to be run concurrently on two separate sets of fields with 5 judges. Then it is repeated the following day. The warm-up event, a Working Dog Test, was conducted the day before. The number of breeds is impressive, too. The spaniels include American Cockers, Boykins, English Cockers, Clumbers, English Springers, an Irish Water, and a Welsh Springer. Several Goldens and a Lab are representing the retrievers. They came from as far away as New Mexico, Wisconsin, and Michigan.

The judges prepped the attendees beforehand with their philosophy and encouragement. “I love having the opportunity to come to this event and spend time with you guys.” “I’m looking forward to seeing some good dogs work.” “We’re looking for good teamwork.” “You’ve worked hard training your dogs. You have it in you to be a champion. Go out there and play like one.” “Trust your dogs.” “Let’s have some fun.” “We’re all here because we love working with our dogs.” “Feel free to ask questions.” “We wish you all the best!”

The first handler, with their dog on a lead, steps up to the starting position with the judges. The dog is excited beyond description with one thing on their mind – “I want that bird!” The handler feels excitement and trepidation. “Will we do everything like we did in training?” The judges give some final instructions. Then the handler releases the dog and the action begins.

The dog weaves back and forth with great concentration to find the right scent. Each breed has its own technique for moving through the tall grass. The handler intervenes periodically with instructions via a whistle, hand signals and voice commands. The dog finally finds and flushes the bird. It takes flight and the hunters take aim. A loud “POW” is followed by a second one. Feathers fly and the bird goes down. The dog follows it for the retrieve.

The handler starts breathing again and whistles for the dog to bring the bird back. One dog is so pleased, she shows her bird to both hunters before returning to the handler. A job well done deserves a victory lap.

The sun is well on its way across the sky and the frost has disappeared. The handlers start to shed their heavy jackets as they move to the next two stages of the test. One stage involves a retrieve across a field where the handler directs the dog to a downed bird the dog can’t see. Several dogs go straight to the bird and bring it back. Others take a more circuitous route, savoring all the scents until they settle on the one for the bird. One dog manages to flush four birds and retrieve a fifth not involved in the exercise, then retrieves the bird it was sent to get in the first place. There was general agreement that this set a club record for the most prolific hunting on a single pass.

The final stage of the test involves one or more retrieves across water, which requires the dog to swim back with a bird in its mouth. The sun is warm but the water is cold. Some dogs have to test the water before jumping in. Some put their feet in and then back up to look for a dry route. The dogs that forged ahead can be heard huffing and puffing as they paddle across the quiet water. This is a lot of work. Imagine what it would be like for a person swimming 20 yards with a small turkey, complete with feathers, in their mouth. Fortunately, the handlers are not expected to perform the retrieve themselves.

Field work is just one of the dog events supported by AKC and the American Spaniel Club. Each event focuses on a particular aspect of the dog. Most dogs participate in one type of event. A dog participating in a spaniel hunt test must demonstrate multiple qualities sought in the other events: the right body construction of conformation, the discipline and teamwork of obedience, the athleticism of agility, the scent location of tracking plus the instinct to flush and retrieve. A dog putting all of those qualities to work in one event is truly a thing of beauty to behold.

People have been busy behind the scenes while the action in the field progresses. The club president is a great chef with an extraordinary team of cooks and helpers. Rumor has it that the first question one of the judges asked when they were invited to the event was “Will there be chicken and dumplings again this year?” The menu for the test included homemade chili, barbecue, and, of course, chicken and dumplings. All diets were put on hold in light of the wonderful pastries served.

The day is winding down as is the sun. Everyone is exhausted. The handlers feed and water their dogs. The finale revolves around the judges’ scores. Everyone gathers to hear the results. One by one, the handler and dog teams that earned qualifying scores hear their names called out. Cheers and clapping break the relative quiet. A second round erupts when someone earns a first or final leg. The handlers collect their ribbons, rings for their lanyards and commemorative 25th anniversary towels. Congratulatory hugs and handshakes are plentiful.

It has been a great run of 25 consecutive years of hunt tests. The Cocker Spaniel Specialty Club of Georgia thanks our sponsors and everyone who participated. We are looking forward to the next 25 years.

To read more about the Club members’ experiences from the event, please visit the Cocker Spaniel Club of Georgia’s website.

Mike Bothwell is a Cocker Spaniel lover who, in 1983, discovered he could enjoy them even more by participating in AKC events. Mike’s success with champions at prestigious shows led him to international competition. His favorites are the ones that earned conformation and obedience titles. He recently discovered the world of field work. Mike lives and sleeps with his dogs in Atlanta and is honored to be a member of the Cocker Spaniel Club of Georgia and the American Spaniel Club.