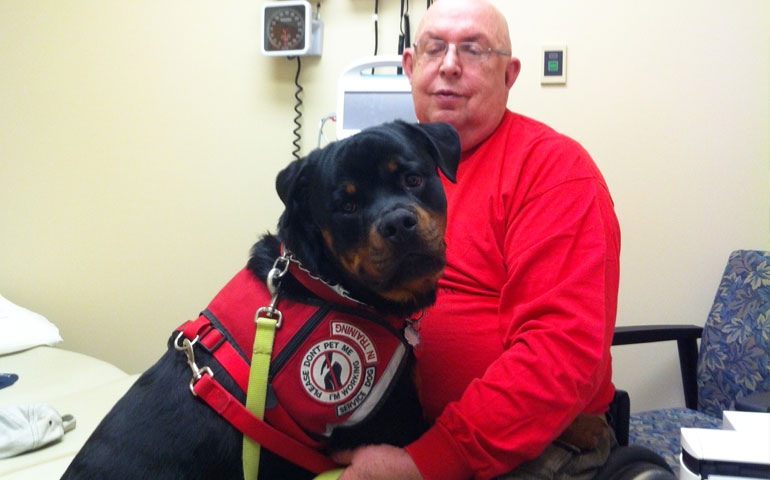 He’s an unlikely lobbyist, but this Rottweiler is doing more than advocating for the rights of disabled veterans—he’s also serving as an ambassador for his breed.

Dieter is a service dog for Neal Williams, a disabled Vietnam veteran who serves on the board of directors of the New England chapter of Paralyzed Veterans of America. In March, the pair will visit Washington, D.C., to meet with the House of Representatives and the Senate about legislation supporting all disabled individuals, including war veterans.

At just under three years old, Dieter is trained to help Williams, who suffered a spinal injury in Vietnam, with mobility, like holding doors open and helping him out of his wheelchair. In February, when Dieter turns three, he’ll be physically developed enough to begin learning how to pull Williams’ wheelchair.

But the most valuable service he provides is something that can’t be taught.

“This past Veteran’s Day there was a series of events that upset me,” Williams recalls. “From the other room, my wife heard me talking and crying in my sleep because I was having flashback nightmares. Dieter, who knows he’s not normally allowed on the bed, climbed on top of me. The next thing I knew, his head was on my shoulder and his paw was around my waist. I never taught him that.”

It was that calm and intuitive temperament that made breeder Mary Gentlesk confident Dieter would be a perfect match for Williams. He had contacted Gentlesk after being referred to her through another breeder.

“I like to breed dogs who are calm and clear-minded enough that they would be good fits for both first-time Rottweiler owners and first-time dog owners,” she says. She knew based on Dieter’s confidence, intelligence, and patience, even as a small puppy, that he’d succeed as a service dog. Seeing how well he and Williams have bonded in the several years since she paired them is what she calls a breeder’s dream. “This is better than any blue ribbon I’ve ever won,” she says. “I was really blessed to have put them together.”

Williams agrees that it’s a match made in heaven. He has had three Rottweilers in the past as service dogs, but Dieter is the first with whom he’s gone through a formal training program together. The training was arranged by a nonprofit organization called Train a Dog Save a Warrior (TADSAW), which set him up with Diane Cunningham of Paws Down Training Service.

The organization’s training method follows what it calls a “battle buddy” program, meaning that the handler and dog are fully trained together. This process is different from that used by other service-dog organizations for which the dog is trained first and then paired with the handler. Following TADSAW’s recommended method, Cunningham led Williams and Dieter through a program that included Canine Good Citizen certification. Williams believes the joint training is how he and Dieter formed such a strong bond. “We developed absolute trust with each other,” he says.

Williams also believes he is partial to Dieter's breed because of their trainability, will to work, and temperament.

“Rottweilers bond very strongly to their owners,” he says. “They’re loving, nonjudgmental, and they can just sense things that people can’t.”

Gentlesk agrees. “They’re so determined, and they just want to please, ” she says, adding that although the nature of their relationship is more than a typical pet–owner one, their bond is so much more than utilitarian. “Dieter really is Neal’s furry best friend—he just does more than fetch a ball.”

Rottweilers are confident, powerful, and loving companions. Learn more about the breed here. If you think this breed is right for you, check out the AKC Marketplace for Rottweiler puppies.