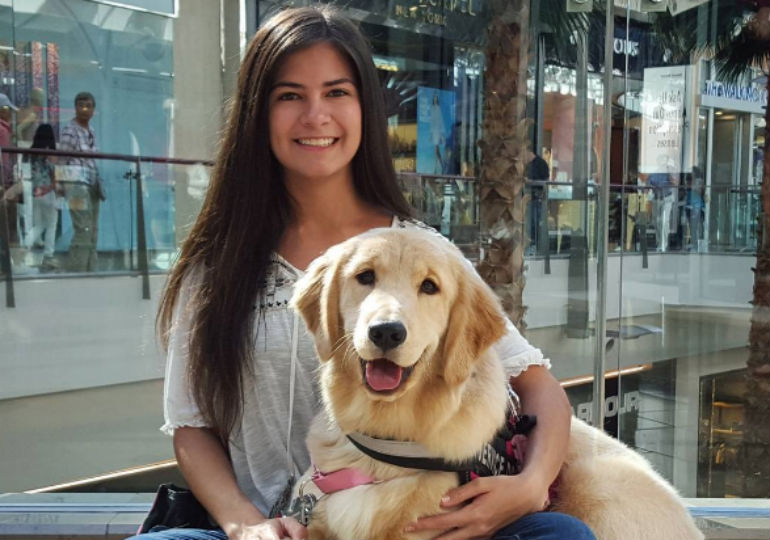 Meet Jaquie Blake and her one-year-old Golden Retriever, Harlow. Harlow is an unbelievably special pup, who works hard every day training to be a service dog for Jaquie.

Jaquie suffers from epilepsy and narcolepsy, among other invisible illnesses. Jaquie works just as hard as Harlow, not only to cope with her conditions, but also to train her own service dog.

Jaquie has been working with and training service dogs since she was 15. Since then, she has trained a dog for a young girl with epilepsy and another for a boy who is hearing impaired, among others.

AKC spoke with Jaquie about Harlow, service dog training, and their Instagram account, @helper_dog_harlow. Read the interview below.

AKC: Why did you decide to train your own service dog?

Jaquie Blake: When I first started getting sick, it came out of nowhere. I was in my sophomore year of high school, and it started with me collapsing. We know now it is cataplexy, which is where heightened emotions trigger a neurological response, and my muscles give out. So I’d completely collapse on the floor and be conscious, but I can’t move. Then I also started having seizures, and it completely, put a stop in my life.

I couldn’t be left unattended; imagine having your parents having to sit right outside your bathroom, while you’re taking a shower, because now the shower is one of the most dangerous places. You can’t drive anymore, and I had just gotten my license because I had just turned 15. I had to be escorted to and from my classes; it just wasn’t a way to live.

I started doing research because I’m the type of person that if I don’t like the situation, I’m going to change it. And I started learning about service dogs. From there, we were looking into organizations and unfortunately we got scammed. We paid a couple of thousand dollars for a dog that tried to bite me, would try and bite my teachers, and walk away when I passed out. So we [returned the dog to the organization] and I decided I was going to train [my service dog] myself.

I’ve been [training dogs for] about five or six years, and now I’m just training on my own after learning what I have from trainers I’ve worked with in the past.

What do you think is the hardest part about training Harlow to be your service dog?

The hardest part has to be pushing through all of the chronic illnesses. And… putting so much effort into something you don’t necessarily want to have. My biggest goal is to one day not need Harlow. And I tell people that and they look at me like I’m crazy [and say,] “Why would you not want a dog with you all the time?” Because I want independence.

But for now, I do need Harlow, and I will use her, and I will train her. The whole aspect of my medical issues is also very hard because she needs to get out. She needs to be exposed to different situations, fireworks, busy streets, [she needs to be] socialized. It’s hard to do that when your blood pressure is deciding to drop all day, or a migraine kicks in, or a cyclic vomiting syndrome episode happens. Now that my boyfriend is back home from deployment, things are infinitely easier because he’s a service human. Now I feel unstoppable with both of them.

Why did you choose a Golden Retriever? Where did you get Harlow from?

I got Harlow from Eagle Ridge Golden Retrievers in Polk City, [Florida]. I did a ton of research. When I was working with different trainers and behaviorists, I got experience with [a variety of breeds].

I wanted a dog that’s easy-going, easy to train, and wants to work. And that’s a Golden right there. They want to please you, they’re people pleasers. I wanted to make my life easy and take what I know and be able to apply it to a dog that’s going to absorb it. So, I wanted a Golden. I also think they’re pretty and cuddly, and sweet natured. And Harlow is actually my very first Golden Retriever I’ve ever had and I’m never getting another breed. I’ve fallen absolutely head over heels in love with them.

What traits does Harlow have that make her a good service dog?

Harlow is such a sweetheart and she’s so selfless. She doesn’t think of herself, which I know Goldens generally don’t. They couldn't care less about how they are, they want to make you happy, which is the best trait. And honestly, she loves to work. She can never get enough, she wants to learn more and do more.

She loves doing her tasks, and that’s the best thing you can ask for: a dog who is excited to work for you because then you never feel bad asking them to work for you day in and day out.

When I first started Instagram, I was training two dogs for Eagle Ridge. I did a lot of research for breeders and found Eagle Ridge, and I told Dennis [the breeder] “I’m going to get a dog from you in a few months, after my boyfriend deploys.” He said, “OK, well can you train two dogs, two of my puppies, to be service dogs and we’ll place them with someone?”

So I was training two of his dogs and we got a volunteer named Meredith, who made the dogs an Instagram, and that’s how I learned to use Instagram because I had no idea how to use it.

But, when I was tracking her training, people were messaging me saying, “I love your story, thank you for sharing. I have the same disability as you, it’s nice to know I’m not alone. What did you do? How did you do this?” It made me realize that there is a need out there for awareness, for the disabilities I have, and for service dogs.

It was really the people, commenting and coming to me individually, that made me realize that people are receptive to this and it’s a positive thing. That’s when I really started to put myself out there. At first I was a little hesitant because you never know what someone is going to say or do when you put yourself out [on the internet], but it turned out to be a really positive thing. Now, I even have a second account dedicated to my different chronic illnesses, and things are going really well now. So that’s why I made the accounts, originally just to track her training… and now I’m really pushing for awareness of invisible illnesses and service dogs.

Do you have any advice for people who might be looking to get service dogs or are in a similar situations? What’s your advice for the public?

My advice is learn from my mistake and do not get scammed. Do your research. All you need to do is go to Assistance Dogs International and they have listed accredited or legitimate service dog organizations that can train and place dogs with people. Or, if you want to train, be prepared to spend a significant amount of money, because it is not necessarily a cheaper route. But it’s also another option, you just have to find a good trainer to work with.

I want people to understand that a service dog isn’t a magic cure, and it will not replace your current treatment plan. Instead, it is an additional tool that requires even more work. Training is a big thing that must be kept up.

Also, understand that you will never be able to just “run to the store” when you have your dog, as people will constantly be stopping you. Sometimes it’s as if people have never seen a dog before, but they mostly mean well. As a service dog handler, I take it upon myself to be a good representative for the service dog community. This means being polite even when faced with rudeness or ignorance.

Access disputes are another reality of having a service dog. Yes, Harlow gives me so much independence and the pros outweigh the cons, but that is for me. A service dog isn’t for everyone, and that’s OK. Be sure to do your research before you make any decisions.

Anything else you want people to know about your story?

I have eight diagnoses, and if you look at me, and I didn’t have a dog next to me, you’d think I’m perfectly healthy. I don’t look sick whatsoever. If you see someone out with a service dog, or someone in a wheelchair who doesn’t look crippled or disabled in someway, don’t jump to conclusions.