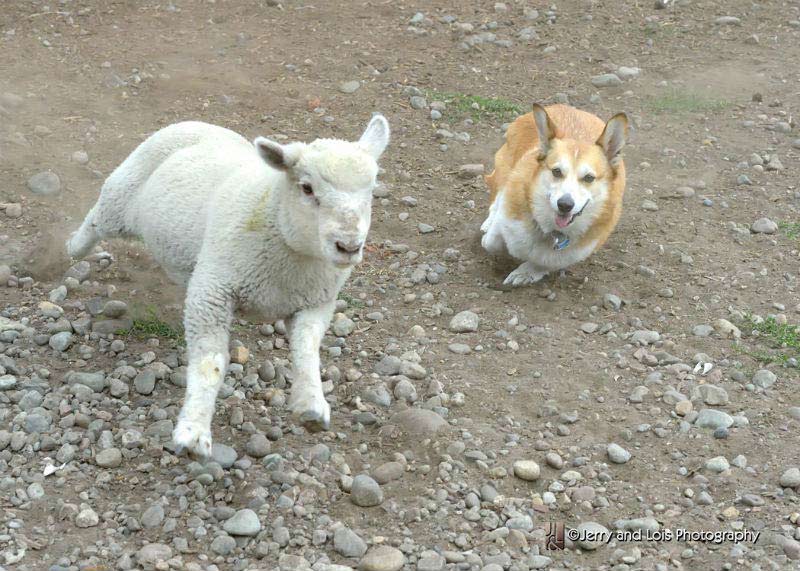 There is a lot to think about at Ewe-topia. Keeping focused, maintaining control and following instructor Joe Kapelos’ directions.

If you’re a city dog owner like me with an energetic Velcro-mate like Maggie (a 5-year-old Pembroke Welsh Corgi), this 10-acre slice of heaven in Roy, Washington, southwest of Tacoma, is paradise.

For Maggie, Ewe-topia is akin to Camelot. The minute we pulled down the gravel driveway on an early July morning, her nose twisted skyward and her body language ushered in a supercharged response to the pastoral turf.

I had a sense that she was home – although her mailing address was an hour away – and I was just along for the ride. Well, every dog needs a self-appointed driver, right?

As I exited the car with the leashed 29-pound Corgi in tow, I was greeted by trainers Joe Kapelos and his wife, Linda Leeman, who founded Ewe-topia in 1992.

We visited briefly, allowing Maggie to settle down after the hour-long car ride. All the while she was eyeing the Olde English Babydoll Southdown sheep in a nearby 50-by-80-foot pen

The Pembroke Welsh Corgi was bred to herd in its native Wales centuries ago so she was in her element. Piece of cake, right?

Not necessarily. “Any dog can herd,” Kapelos emphasized, “but on their first visit here, a lot of dynamics come into play. For instance, how well has the dog been socialized, does it have any aggressive tendencies, what kind of condition is it in.”

About 99 percent of Ewe-topia visitors are weekenders (city folk) like us and are there simply to interact with their dogs and have fun, Leeman says. The other 1 percent are serious herding competitors who return weekly or more often to refine their skills for local, regional, and even national herding trials.

Leeman put it this way: “Not everyone likes to compete. As one student told us after competing in a trial, ‘My dog, Petey, is happy just herding at your place. I am doing this for him. Why should I spend money, and time at trials when I can just herd at your place?’ “

“We try to make it stimulating, fun, and challenging,” Kapelos adds, “so you will want to come back after the first 15-minute lesson.

“We’re training the owner more than the dog, and like anywhere in society we get a wide range of personalities. Some are a bit obstinate and want to see results instantly. Others roll with the flow, appreciate seeing the fun their dogs are having, and recognize the bond they are building with those same animals that are home alone much of the week.

“I can usually read newcomers [both owners and dogs] within a few minutes and get a feel for how we’re going to progress.”

See another dog give herding a try at Ewe-topia:

Finally, it was game time for Maggie. As he worked and introduced her to the sheep and a training pole, Kapelos was impressed with her confidence and comfort in the new surroundings. “She’s been well socialized,” he smiled. “Those city dogs that haven’t been are usually nervous and edgy the first day. It takes a few visits for them to loosen up and find their comfort zone.”

On the introductory visit, Kapelos works the dog while the owner observes nearby. In the process, Maggie continually eyed me as I observed from the other side of the arena. She was seemingly asking, “How am I doing dad?”

While she is in good shape – I run her at a nearby park daily, where she interacts with other dogs both on rolling hills and in Puget Sound – she began to tire after about 10 minutes. “First timers usually hit the wall psychologically before physically,” Kapelos explained.

A dog’s attention is often associated to its background and personality. “Some are real pleasers and will use the drive for which they were bred,” he explained. “Some have more drive than others. By that I mean their instinctive drive supersedes their city-dog lifestyle. All have personalities, and the instructor and owner-handler must learn to bend with that.”

Kapelos did not look at Maggie as a Corgi. “I see her as a herding breed. All dogs can herd but many factors play into their progress – age, temperament, socialization, handler’s ability, conformation, amount of time spent practicing, and most important, how well they listen to the instructor.”

And, of course, there is learning a few new commands, too, such as steady, go by and away, for starters.

As Maggie began to tire, Kapelos decided it was break time, which this Corgi welcomed on the overcast, 60-degree morning. During the 30-minute recharge and refocus intermission, she sprawled on the grass, revisited the water bowl constantly, all the time eying a new group of sheep Kapelos brought into the round training ring several feet away. (It was designed that way so the sheep would not cluster in a corner of a square layout, making it more difficult for the dogs to nudge them out and keep them moving.)

As her follow-up 15-minute lesson began, Maggie’s motor was at full throttle again and performing smoothly under Kapelos’ seasoned tutelage. This session targeted re-enforcing the basics emphasized earlier. But this time, Kapelos put the training pole aside in favor of a hat, which was not so intimidating. “Maggie’s a city dog with a herding instinct,” Kapelos explained. “When owners bring a city dog out here they can’t turn on a switch and expect it to instantly begin herding. For some, it takes weeks, for others, it’s minutes. Technique and tone of your commands can affect your dog’s progress mightily. But pushing your dog too quickly can sometimes have the opposite effect.”

In other words, Americans’ fast-food, quick-fix mentality doesn’t work here. There are just too many variables affecting progress. Leeman noted, “Getting the herding concept is easy, but applying it may take some time. Just be patient and it will all fall into place.”

Hence, high on Kapelos’ priorities is positive re-enforcement. “Praise her like you mean it,” he continually urged. “Complimenting your dog is just as important as correcting it. It thrives on motivation. Out here, you be the good cop, and I’ll be the bad cop.”

Asked what the biggest mistake he sees in first-time visitors, he responded pointedly, “They try to be their dog’s friend rather than its leader. I can tell quickly if the dog is running their life or vice versa. If so, that needs to be corrected quickly.”

What is the most common question he and Leeman receive from newcomers? “Do you put all the dogs in the ring at the same time,” she laughed. Keep in mind Ewe-topia is designed chiefly for individual lessons ($14 Tuesday/Thursday/Saturday and $12 Sunday for 15-minute sessions). While Sunday lessons begin at 9:30 a.m. it is not unusual to have owners signing up as early as 6 a.m.

Ewe-topia attracts approximately 4,000 student visits annually; it is closed for maintenance two weeks in early July and from late November until mid-January. Typically, 200-300 training sessions are offered weekly, with most owners coming from the Greater Puget Sound area and driving an hour or more to the site. “When gas prices were higher, it definitely affected our business,” Leeman said.

As Kapelos worked Maggie, it was with an odd number of sheep. “They will bunch up in pairs,” he explained, “and I want the dog to be focused only on those in front of it. With three, they will usually stick together and keep moving.”

Anxious to get his take on Maggie’s introduction to Herding 101, I asked him for a candid assessment:

“I like how she read the stock. She didn’t rush them and moved them nicely. I liked her focus. She has plenty of potential as a herder.”

As we pulled away from Ewe-topia after the two-hour visit, Maggie whiffed the blissful scent of country living one final time, poked her nose skyward out the window again, stole one look backward at her new definition of paradise and whooped a celebratory wolf-like howl, saying, “I felt like I had been looking for this place . . . my whole life” (from the TV movie, “Their Eyes Were Watching God.