The Pumi: There’s More To The 190th Breed Than Meets The Eye 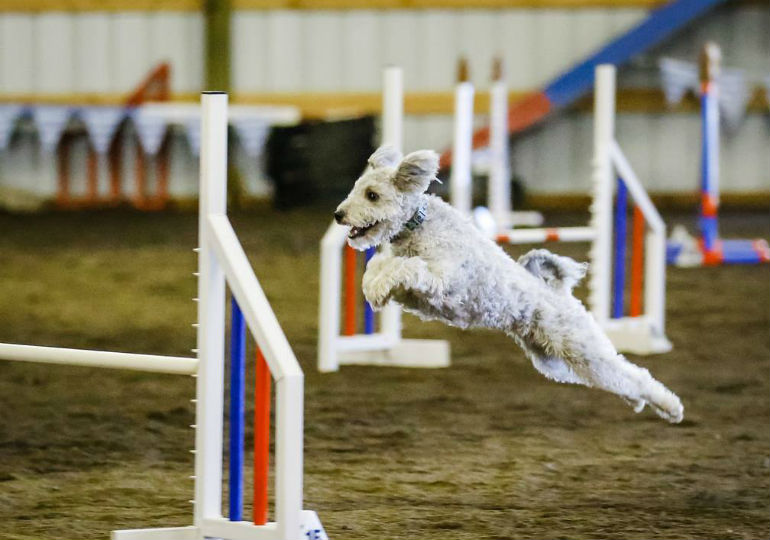 That’s one of the cautions surrounding the American Kennel Club’s newest recognized breed, which numbers only about 350 in the United States.

“People tell me all the time – your Pumis look so adorable, like stuffed animals, koalas or even Ewoks,” says Karen Beattie Massey, of Issaquah, Wash. “However, they are tougher than they look. Pumis in their homeland Hungary herded large gray cattle and long-horned sheep. Their job was to help drive the stock through narrow tracts of land between cornfields without letting the stock eat and trample the crops.

“Pumis would control the stock through their quick movement, barking and occasional nipping if required. Of course, we see this tenacity and these behaviors in the modern-day Pumi and they need to be channeled into appropriate activities.”

“Having said that, they are also sensitive and affectionate and very in tune with their owners.”

Chris Levy, of Salem, Ore., president of the Hungarian Pumi Club of America,” echoes Massey’s characterization and adds, “A Pumi is an intelligent, active dog that needs a job to do. It must be with an active family that enjoys activities with its dog. The Pumi is very centered around its person or family, which it considers its flock. It is concerned when its flock is separated from each other or they from their flock. A family needs to understand this perspective before deciding to own a Pumi.”

Levy also emphasizes the breed can be obsessive about order. For example, she described how a friend regularly gets up in the morning, puts on her bathrobe and walks into the kitchen to make coffee. One morning she didn’t follow this procedure, leaving her bathrobe behind in the bedroom. While she was making coffee, her Pumi pulled the bathrobe off the hanger and brought it to her.

When asked to note the biggest surprises she encountered with her first Pumi, Tammy Hall, of Shelton, Wash., Vice President of the parent club, replied, “Perhaps the reactive and expressive nature. Also, their ability to chill and relax until it’s time to work. They are incredibly affectionate and bond strongly to their owners. A Pumi, however, will not work for just anyone. It will only work for someone it knows and trusts. No matter how affectionate they are with you, they aren’t that way with everyone. They aren’t a dog someone can steal because they won’t go with someone they don’t know. They also make great hiking companions, as they keep track of their owners and will protect them.”

Beattie Massey responded to the same question: “They can be quite tenacious and work very hard to get what they want.”

Levy, meanwhile, was surprised by “their intelligence first, then their persistence and focus. When throwing tennis balls for our first Pumi, if the ball went into the bushes, he would not stop until he found it. Next, their eagerness to please.”

Meir Ben-Dror, of Landrum, S.C., a HPCA board member and chair of its versatility program, has owned Pumis with his wife, Nancy, since 2009, said his surprises with the breed were that it exceeded all of his expectations in loyalty, attentiveness and protectiveness.

News stories, winning major events and AKC recognition are all engaging hooks for a breed’s new-found popularity with the general public. In the Pumi’s case, the latter and subsequent feature accounts in mainstream media nationally have triggered a passion and curiosity in the breed. Club members are working hard to keep up with the overwhelming number of inquiries and requests for information about the breed.

What To Expect From the Pumi

“This is not a breed for everyone,” Levy cautions. “The Pumi truly considers itself a full-fledged member of the family and will make sure that is the case. It’s also not a good candidate for a family getting its first dog. The breed is so smart that it, not the human, will be ruling the household. Consequently, it requires exercise and mental stimulation, which necessitates owner commitment.”

In that vein, the Pumi is the perfect partner for dog sports, including agility, nose work, flyball, obedience and herding. “They have a good work ethic,” adds Levy, “and want to do anything as long as it’s with their people.”

A morning or evening walk isn’t enough to satisfy its needs. “There should be a daily training component to your time together with your Pumi,” advises Beattie Massey. “They thrive on their relationship with their owners so it’s key to have a directed activity where you are in the leadership role.”

Hall concurs, “Pumi are quick learners, but you must make sure you are clear on what you teach them. As an owner, you need to be one step ahead at all times. They are difficult to retrain unless you completely change the picture. Otherwise, they think you are wrong and they are right because what they are doing is good enough.”

If you think you know dogs, a Pumi can fool you. It can be a bit hard to read in a social setting like a dog park or simply on a neighborhood walk. “When my dogs greet someone they know,” explains Hall, “they bark, growl and make all sorts of sounds. Likewise, when they greet other dogs with which they want to interact. Unless you know them, you may misinterpret their noises for aggression. They are just happy. Pumi rarely dive into situations, they usually stand back and observe before deciding to what level they want to be involved. It’s critical to know your Pumi’s triggers and manage them accordingly.”

From a health standpoint, all is good on the Pumi front. “We don’t have a lot of experience with old-age dogs,” says Levy, “because most were born or imported within the last decade.”

Is there any mystique surrounding the Pumi or does it let you know what it’s all about from get-go?

While Hall notes the challenges for strangers to read the Pumi in a public environment, Ben-Dror concludes, “For the owner, the Pumi is an open book. It always lets you know what it is up to, what it wants and what it expects of you. In return, it’s uncanny how the Pumi practically reads the human mind.”