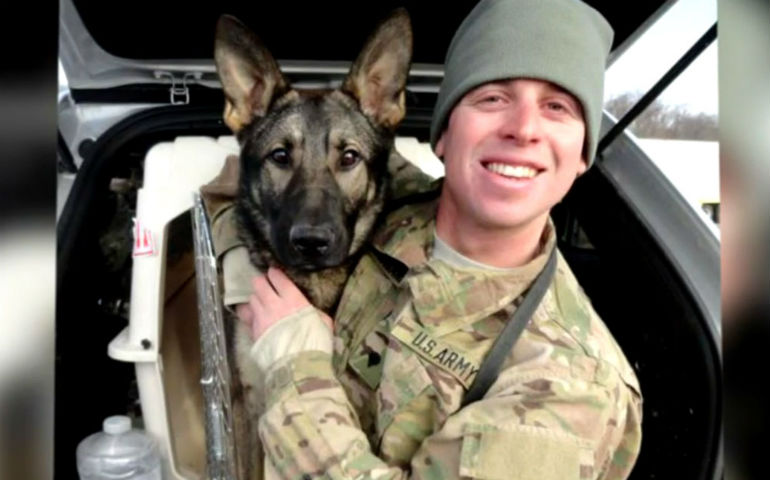 After three long years, U.S. Army Specialist Vance McFarland finally has his war dog back. McFarland hadn't seen Ikar, the tactical explosive detection dog (TEDD) he deployed to Afghanistan with, since 2012. Until last week, when the pair was reunited.

While deployed, Ikar and McFarland searched for roadside bombs and IEDs. “We had a dangerous mission and we both needed each other to do our jobs not just to save ourselves, but to bring our fellow paratroopers home alive and in one piece,” McFarland said. “Ikar definitely made the reality of war much easier to get through.”

The pair returned in September 2012—and were separated immediately. “When we walked off the plane at Fort Bragg, I had Ikar for long enough for them to take a picture before they took him away from me and sent him back to go back through the TEDD program and back to Afghanistan,” McFarland told 7KTVB (scroll down for video).

After working in Afghanistan with another handler, Ikar was one of 12 TEDDs acquired from the Department of Defense by a military contractor who abandoned the dogs at the Mt. Hope Kennels in Virginia, explains Kristen Maurer of Mission K9. (Read the whole story here.)

The dogs were carefully cared for by the kennel owner, Greg Meredith, who waited a year and a half for the contractor to find new jobs for the dogs. That never happened. Eventually, they were turned over to Mission K9 Rescue and the U.S. War Dog Association, and since July, those nonprofits have been reuniting dogs with their handlers one by one.

The first was Moto, who was reunited with Ethan Mordue. Then there was Abby, a yellow Lab whose handler had been killed in a car accident recently. She was taken in by the man’s wife and children. “This is the last connection that they have to their father,” Meredith told AKC.org.

Donna, a Belgian Malinois, was reunited with Army Specialist Tyler Roberts on August 19. He had been looking for her since 2011. (See a video of their reunion here.)

Two dogs didn’t have handlers, so instead were rehomed with individuals experienced in working with former military dogs, Maurer explains. Tomo went to a home in Colorado Springs with a woman who lost her two military working dogs recently. Coba was rehomed with a retired army veterinary technician, who also recently lost her dog. “Coba was having gastric issues from all the stress of the past year,” Maurer says. “But now she’s settled in and is peaceful and happy.”

Two of the dogs are set to be reunited with their handlers in September, and the final two are waiting for their handlers to return from deployments.

“It’s been so rewarding to see these people reunite with their dogs,” says Maurer, who has been working tirelessly to arrange the transportation of the dogs, even driving and flying all over the country to deliver them personally. “These guys just melt when they get their dogs back.”

“I’m convinced that no matter how strong a person is, these men and women come back a little broken,” Maurer says. “I don’t know how they couldn’t. But when they’re reunited with their dogs, you see a piece of them get put back together.”

The owner of the kennels remains in financial distress from the money he spent caring for the dogs during their 17 months. Maurer and her team set up a GoFundMe account to help him recover some of the funds. “He’s a hero who did the right thing,” she says of Meredith, who also previously rehabbed dogs rescued from Michael Vick’s dog-fighting ring.

As for Ikar, he had not one but two people who wanted to spoil him for the rest of his life. Maurer reported that both of his handlers came forward. With the TEDD program, she explains, there’s an unofficial rule that the first handler gets first dibs. But although the second handler was disappointed, he was understanding. Maurer reported that both handlers are now Facebook friends, and in the future, Maurer will fly the second handler to Idaho to meet McFarland and see Ikar.

In the meantime, McFarland planned to let Ikar spend his first weekend in his new lifelong home playing in the lake. “He is going to live the rest of his retired life spoiled. Really spoiled,” he said.