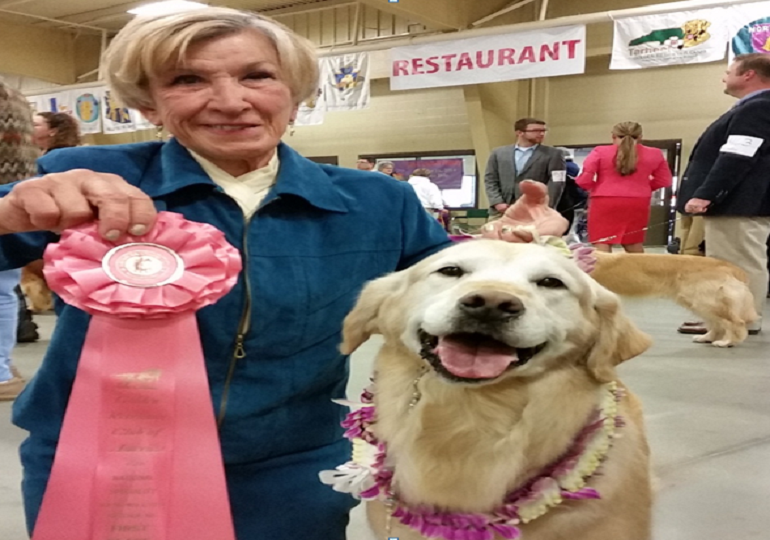 The Maine Golden Retriever Club has announced its selection of Claire Caro of Elizabeth, Colorado as the club’s 2016 Honorary Member.  Ms. Caro currently serves as Secretary of the Golden Retriever Club of America (GRCA).  She is a Life Member of GRCA and formerly served as the organization’s Treasurer for many years.

“As GRCA’s New Club Liaison, Claire devoted much time and effort in advising, coaching, mentoring and assisting MGRC in reaching its goals of AKC licensure status and full membership in the GRCA,” said Charles L. Cragin, MGRC President.  “MGRC is pleased to add Claire to our list of distinguished honorees.  She has made significant lifetime contributions to Golden Retrievers”, Cragin said.

Ms. Caro taught biology in a high school in suburban Denver from 1977 until her retirement in 2004.  During that time her Golden Retriever therapy dogs accompanied her to school nearly every day and provided a hands-on tool in her biology labs.  This led to a grant from the Golden Retriever Foundation enabling her to write a resource book to assist other teachers in utilizing dogs in the classroom.

Since 1974 she has experienced the joy of owning, training and handling twelve Golden Retrievers competing in conformation, obedience, rally, hunt tests and WC/X as well as participating in various capacities in the Mile-Hi Golden Retriever Club of Colorado.

Ms. Caro, in her acceptance letter, told the MGRC that she was “very grateful for this honor and proud to join such a distinguished group of honorary members.  I’m particularly appreciative of the opportunity to work with and advise the highly motivated MGRC members as they took their club in record-setting time to AKC licensure status and full membership in the GRCA.  It is always exciting to welcome a new club into the GRCA family and I look forward to attending an Independent Specialty hosted by MGRC.”