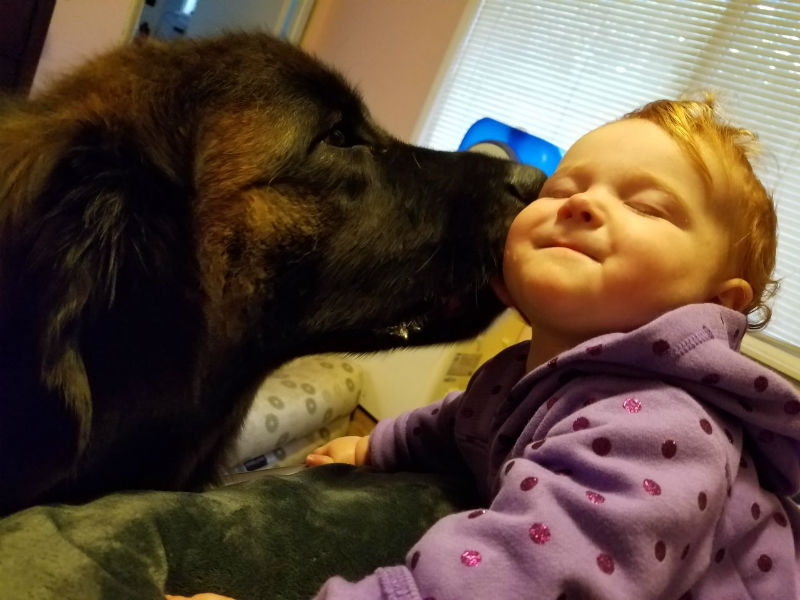 Tiny road warrior Mara Rose attended her second American Kennel Club National Championship last month in Orlando, Fla. But there was a big difference and an entirely new perspective for her this time around.

In 2015, she was still being carried around inside a very pregnant mom, Tiffanie Coe, who was competing with her 115-pound Leonberger, Leo Roar, at the giant event. Coe gave birth to Mara Rose on Dec. 17, only a couple of days after returning home to Black Diamond, Wash. Last month, one-year-old, 20-pound Mara Rose was simply taking in another dog show, of which she felt right at home.

Wilson, the partial owner of a driving school, was unable to attend every show, but when he was onboard, the care regimen rivaled a well-oiled machine. “Typically, we tag team with Mara Rose until I need to get Leo Roar ready, so we share feedings, diaper changes, and entertaining the now mobile mini human,” Coe smiles. “We share duties with Leo, as well. Rob will give Leo his bath at home, and when I get home from work, I put Leo on the grooming table and blow-dry him. We then pick up Mara from daycare. When we get home, I add a few final touches on Leo, such as teeth brushing, ear cleaning, and brushing him out.”

Upon reaching the show site, the couple has a tight system for unloading and getting everything in. “I allow Leo to relax in his crate until about 30 minutes before his ring time. Then we start our pre-ring warm-ups, finishing with a brush-out, and attaching his show lead,” she adds.

When Wilson attends a show, he does the driving, and Tiffanie entertains Mara. When he stays behind, he assists in getting everyone loaded into the car, making certain Mara has her bottle and a couple of toys. For early departures, Mara stays in her PJs, and Tiffanie dresses her when she awakens at the show site.

Coe attempts to day-trip when competing in many Pacific Northwest shows, unless she faces an 8 a.m. ring time. “Mara is a fantastic traveler and usually sleeps or talks in the car. She is rarely fussy, which helps reduce the stress level for all of us,” says Coe.

Upon reaching the venue, here is their drill: Wilson will wait in the car while Coe goes inside to check the layout in order to determine the logistics for getting everything unloaded.

“We are becoming quite skilled with bungee cords. If I am by myself, I leave extra time. I will typically unload the car onto the crate dolly and take the gear in, while pushing Mara in her stroller. This allows me to set up the crate, grooming table, and Mara’s playpen, if space permits. I then return to the car with Mara and get Leo. If I cannot make two trips due to logistics or timing, then we just have to be a bit more flexible about what comes in and how I carry everything.”

Once inside, she is careful to budget time for changing into her suit, getting her armband number, making certain Mara is changed and happy, and for brushing out Leo one final time. All of this is simplified, of course, when Wilson is alongside.

“If Mara is napping, then we take turns walking around, visiting, running errands, etc. It all depends on if we are able to set up her human-containment zone or if she is in her stroller.” This month Coe is traveling solo with Mara at clusters in Puyallup, Wash., and Portland, Ore.

The length of stay at each show is determined by breed and/or group placements. Depending upon the results, they will wait for winner's photos, group or Best in Show judging, or head home earlier in the day.

“As Mara develops, we are shifting a few things in our regimen,” says Coe. “Last year, I tried to ensure she had two naps, even at shows. For 2017, we are going with one, more solid foods, and a cup instead of a bottle. And, of course, she will be walking soon, which presents a whole new set of challenges.”

The dynamics of dogdom played heavily into her decision to take Mara Rose on the entire journey her first year. “I have met so many incredible people through the sport,” she explains, “many of whom I only see at a particular show. So I promised everyone that Mara would not miss a show her first year.”

Coe’s unsung support team has proven invaluable. “I have a few close friends who try to be available to assist. It varies with each show. Someone to just hang out with Mara ringside while she is in her stroller usually suffices. However, occasionally a diaper changer is needed, too. “It is wonderful she has so many aunties, uncles, grandmas, etc. She recognizes her dog show family and is happy to see them, although sometimes it is weeks between visits.”

No matter who is alongside her, Mara is always ringside when mom and Leo Roar are competing –- sometimes clapping and cheering, sometimes napping.

The love affair between the giant Leo Roar and munchkin Mara Rose is something to behold at home. He is highly attentive and will rest on the floor, always keeping a watchful eye over her. When Mara is in her high chair, he walks close enough that she can reach out and pet him. “If Mara is fussing,” says Coe, “Leo will walk up to her and lick her to distract her.”

Their interaction extends to toys—a la what’s yours is mine, too. “Leo will bring toys to Mara if she is playing on the floor. And he will also try to sneak away with her stuffed ones,” laughs mom, a General Electric global fulfillment specialist in Issaquah, Wash., a Seattle suburb.

Wilson concedes the past year was not what he expected or bargained for. “Attending my first AKC National Championship with Tiffanie and Leo Roar in 2014 was an eye-opening experience. Then seeing her dedication to the sport while she was pregnant showed me what I had to look forward to. Even though things tend to get quite hectic, Mara Rose is always in good hands.”

While the couple will be studying judging assignments carefully this year, they have already targeted three major shows – Westminster in February; Leonberger Club of America National Specialty in Hunt Valley, Md., in April; and the American Kennel Club National Championship in Orlando in December. From Western Washington, all are multi-thousand-mile driving trips.

While last year was a tumbling kaleidoscope of emotional richness and continued challenges for the family, it was mixed with more substance than splash. Throughout the adventure, Coe managed to juggle all of her responsibilities while enjoying the experience.