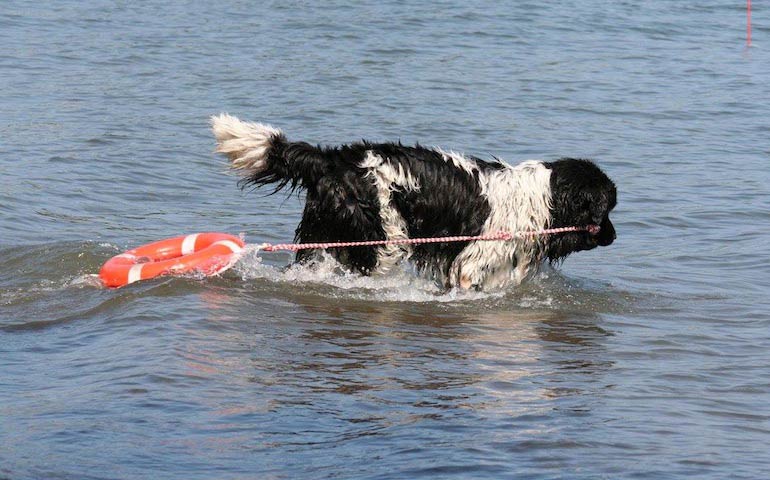 This month a number of talented Newfoundland dogs had the chance to prove their rescue skills as well as their love of the water when the Genesee Region Newfoundland Club (GRNC), a regional breed club of the Newfoundland Club of America, hosted its annual two-day water test on Labor Day weekend.

On the shores of Cayuga Lake, in the Finger Lakes region of upstate New York, dog and handler teams worked toward achieving Water Dog and Water Rescue Dog titles.

The GRNC also hosts a Good Sportsman Award, to be given to a team determined by the judges to be an outstanding working team. This team does not have to qualify in the tests to receive the award.

Judges Donna Thibault and Cathy Archer graciously donated their holiday weekend to spend both days on a rather warm beachfront judging the various dog-and-handler teams. The temperatures were unseasonably hot, and Saturday provided a stiff wind and resultant high waves, making for hard work for these dogs. It truly was inspiring to watch all teams maintaining focus through the environmental challenges!

After two days of water testing, seven teams earned titles, new friends were made, old friends reconnected, and the club once again celebrated a most successful event.

Judges Donna Thibault and Cathy Archer with test participant Mallory, who requalified twice for the Water Dog title at the age of 11 years, 9 months.

A multipurpose dog, at home on land and in water, the Newfoundland is capable of draft and water work and possesses natural lifesaving abilities. The Newfoundland’s large stature and powerful muscles and his waterproof coat and webbed toes all enable him to stroke through the water with the speed and endurance to rescue a drowning man.

Indeed, the Newfoundland is exceptionally well built for water work. The dog has a water-resistant double coat, a muscled tail that is used as a rudder, webbed feet, and ears that cling close to the head. Newfoundlands do not “doggie paddle” but rather sweep their paws to the side with webs fully spread for maximum pull in the water.

For all his power, the Newfoundland is a devoted companion, intelligent and with a sweet disposition.

Few ships in the 18th and 19th centuries set sail without a Newf on board, the dogs being kept in the “dog walk” on early sailing ships. If the sea was too choppy when land was sighted, the dog swam to carry a line to land. Legends abound of Newfoundland dogs saving drowning victims, and their reputation for heroic water rescues was unparalleled.

Developing a Test of the Breed’s Water-Rescue Skills

In 1971, a group of Newfoundland enthusiasts developed plans for a water trial consisting of 12 exercises, six each in two divisions: Junior Water Dog (WD) and Senior Water Rescue Dog (WRD). Two years later, the Newfoundland Club of America sanctioned its first official water rescue test. The water rescue test for Newfoundlands was created to promote these rescue skills and to encourage the continuation of the breed’s rescue instinct.

This test truly shows the bond between dog and handler. Performance of a series of exercises in each division is intended as a demonstration of skills between dogs and handlers, with emphasis on teamwork in rescue situations. It is desirable that the dog demonstrates willingness and enjoyment of his work in a combination of controlled teamwork and natural independence.

Created over the past three years by the Working Dog Committee of the NCA, the newest division is Water Rescue Dog Excellent, or WRDX. This test is for the elite working dog who shows a drive and stamina and instinctive working ability even beyond that of most Newfoundlands.

The NCA water tests continue to provide an opportunity to encourage natural instincts in the dogs and allowing us the wondrous experience of working with or observing the breed’s natural behavior.

The Genesee Region Newfoundland Club is proud of the reputation we have built as a team-oriented group, and we hope to continue our stewardship of this noble breed for many more years.