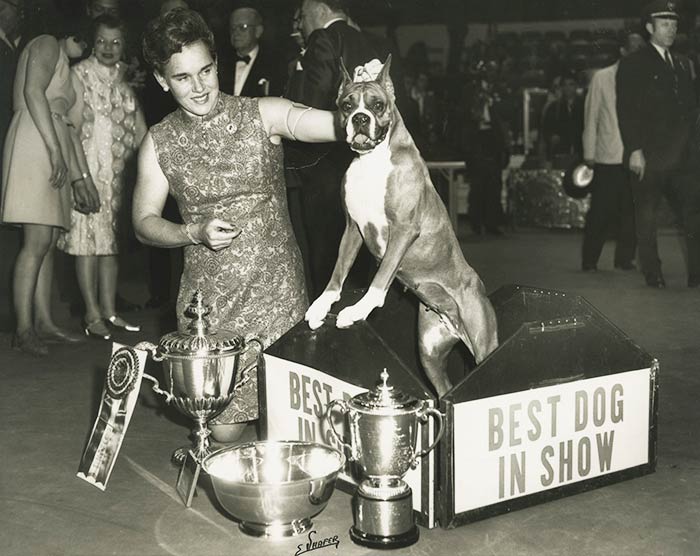 “The entire American Kennel Club mourns the loss of Jane Forsyth, and we send our condolences to Bob and Sioux,” AKC President/CEO Dennis Sprung says. “Janie was an inspiration and knowledgeable friend to untold numbers of breeders, exhibitors, judges, and the sport as a whole. Without question, she will be always be appreciated as a true legend.”

Mrs. Forsyth, of Pinehurst, North Carolina, was born Jane Kamp into a New England dog-show family. She put an obedience title on a homebred Airedale Terrier when she was 9 years old. By the age of 13, she was managing and handling for important kennels. She went on to be one of the busiest and most successful professional handlers of her generation, piloting hundreds of dogs of several breeds to championships, group wins, and Best in Show awards at the nation’s most prestigious venues.

In 1967, Jane Kamp married her frequent ring rival Robert S. Forsyth. They became the sport’s most famous husband-and-wife team of handlers. Mr. and Mrs. Forsyth handled Westminster Best in Show winners, the only married couple to do so: Mr. Forsyth with Whippet Ch. Courtenay Fleetwood of Pennyworth (1964), and Mrs. Forsyth with Boxer Ch. Arriba’s Prima Donna (1970). Together they authored the award-winning “A Guide to Successful Dog Showing,” long considered an essential text on the subject.

Mrs. Forsyth was named the Kennel Review Handler of the Year three times, which earned her a place in the publication’s Hall of Fame. She won three Gaines Awards, including Woman of the Year, and was inducted into the American Boxer Club Hall of Fame in 2001.

After 43 years of handling, Mrs. Forsyth retired in 1981 to become a judge. An all-rounder judge for AKC and FCI breeds, Mrs. Forsyth judged at every important venue America has to offer and judged internationally everywhere from Mexico to Finland. Among her many AKC/Eukanuba National Championship assignments was Best in Show in January 2006. She summed up her judging philosophy by saying, “I think you owe it to the exhibitor to be pleasant and have some fun. I may bark, but I don’t bite.”