Guide Dog Started Saving People Before He Was House Trained 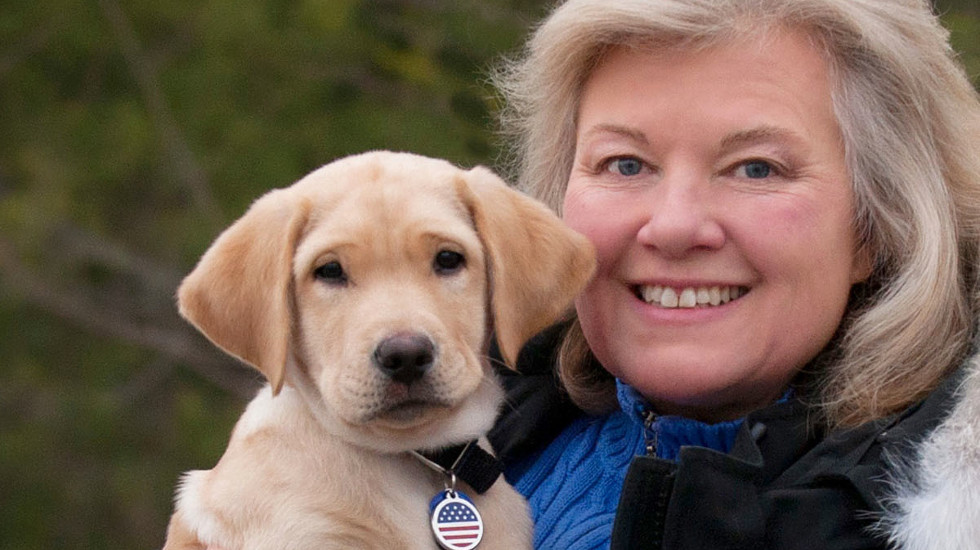 Merrick, a 4-year-old black Labrador Retriever, works as guide dog for a blind man. But his career as a savior started when he was just a tiny pup.

Lorraine Trapani, the volunteer puppy raiser who took 11-week-old Merrick under her wing in 2011, says that this tiny bundle of black hair, high spirits, and energy saved her life.

After the death of her husband in 2002, Trapani buried her grief in her job as an IBM executive program manager.

“It’s very easy to get into a habit of working non-stop,” she says. The pretty blonde packed on about 105 pounds. She was lonely, sad, and dangerously overweight.

The she learned about the puppy-raising program at Guiding Eyes for the Blind, in Yorktown Heights, New York. The organization has more than 400 volunteers, vital links in the chain that brings canine assistants to people who need them. Says Michelle Brier, GE spokeswoman, “Without the extraordinary dedication of our puppy raisers, we would simply be unable to provide guide dogs to people who are blind or visually impaired.”

For about a decade, Trapani had been searching for a way to honor her husband, whose final illness had left him with only partial vision. Raising a pup to help a blind person seemed to be the perfect memorial.

That was all she was expecting when Merrick bounded into her home, but she got so much more. All of sudden, instead of staying at home, she was walking hours a day to burn off his puppy energy. Instead of spending hour after hour in front of the computer, she was forced into a regular schedule. Instead of hiding, she had to get out and talk to people, and smile, because no one can resist a Labrador Retriever pup.

As a service dog in training, Merrick was welcomed everywhere, at IBM centers, malls, shops, doctor’s offices, and even at Trapani’s Weight Watcher’s meetings. The pounds came off and Trapani’s health improved so much that she was able to stop medication for high blood pressure and cholesterol. Her doctor said he wished he could bottle whatever it was that Merrick did.

“I told Guiding Eyes that Merrick achieved his goals before he started formal training,” she says.

But then came the hardest of days, when she had to let him go. Despite ample preparation from the GEB team on dealing with the loss, sending Merrick away for his advanced education was devastating. “It’s like giving away a part of yourself,” Trapani recalls. “I was sobbing like a child.”

More than a year passed, Merrick completed his training and was paired up with a blind man—Carl Richardson, of Boston. Richardson had lost his sight and some of his hearing because of a condition called Usher Syndrome.

Merrick was gone, off to his new life and Trapani knew she might never see him again.

Then, out of the blue, something wonderful happened. She got a phone call.

It was Richardson, calling to thank her for her role in molding this wonderful companion. GEB offers puppy-raiser contact information to the people who get their guide dogs, in case they’d like to keep in touch.

Richardson told Trapani that he understood how hard the job is, especially the separation, but he wanted her to know how important the dog is to him. When he was declared legally blind at 28, his world had started to collapse. He was afraid to take public transportation, walk down a street, or talk to women. He felt isolated, the blind guy with the cane. At 30, he got his first four-footed guide, Kiva, and everything changed. Suddenly, he was the guy with the great dog. Everyone wanted to know him.

Flash forward, Richardson is married (to a woman Kiva picked), and working as an Americans with Disabilities Act coordinator for Massachusetts. He confidently navigates busy streets and gets on buses and subways, where Merrick gently nudges people out of the way so they can grab a spot no matter how tightly packed the crowd may be. When snow buried Boston in 2015, Richardson was out and about, with Merrick as his eyes and ears.

Richardson believes it’s important to let his puppy raisers know that he appreciates what they did for him. “I can’t imagine the sacrifice they make to give up these amazing dogs,” he says.

Trapani says has learned how to deal with pain of letting them go. “I knew I wanted Merrick to succeed because I wanted to honor my husband. I knew I couldn’t do that if he stayed with me.”

Just recently, Trapani, who is currently raising her third Guiding Eyes puppy, Ed (see cover photo), met Richardson for the first time and saw puppy that she raised doing his job. Asked what it felt like, Trapani referred to the 2013 Budweiser Superbowl commercial, in which a man raises a Clydesdale foal, only to send him off for his adult work. Years later, he sees his one-time young charge, now a magnificent member of the parade team. In a very memorable scene, the horse makes it clear that his old friend was not forgotten.

Just before the reunion, Richardson took off Merrick’s harness, a signal that he was off duty. The big black Lab charged over to Trapani and jumped up, placing his paws on her shoulders, wildly wagging his tail, as if to say, I remember.  Later, Richardson put the harness on, and it was back to business. Merrick paid no attention to her. Trapani felt a little sad, but then, “Carl gave me a demonstration of them working together, and the universe clicked into place.”

She watched as they walked away, proud, erect, moving quickly and with confidence. “Merrick looked like he was prancing,” she says. “Together, he and Carl were somehow taller.”

The same emotions are at play when a puppy raiser sees the working guide dog she helped create.