A Dog Of Many Talents: Meet A Grand Champion Ibizan Hound Who Is Also A Service Dog 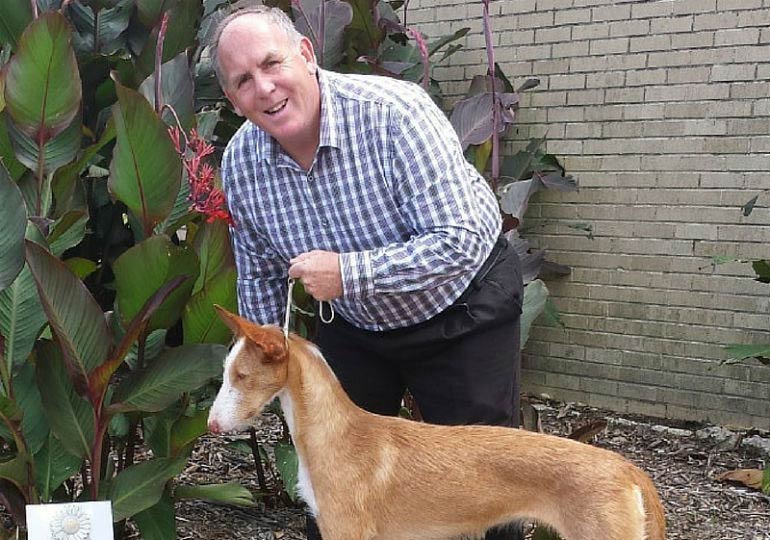 For 54-year-old Army veteran Rob Shaw life is a rollercoaster of psychological turbulence triggered by PTSD, severe depression, and anxiety disorder. In other words, there is plenty of bite behind the bark.

For the past three years, a dose of Pepper has been the best prescription medicine in his attempt to overcome the challenges, all of which can have encumbering side effects.

This isn’t conventional pepper, mind you. Rob's Pepper is a young Ibizan Hound that is a registered service dog one minute and a crack conformation and lure-coursing competitor the next. And her handler in both has been Shaw.

Pepper was part of a litter of eight, and as Shaw loves to say, “She chose me when she was 2 days old.”

He served 26 years active duty in the Army and retired in 2007 as a first sergeant. Tours of duty took him to Europe, Korea, Central America, South America, and the Middle East. While stationed in Germany in 1988, he was injured in a helicopter accident and sent back to the United States, where he began incurring severe headaches while working with M1 A1 tanks, eventually forcing his retirement.

Because of the other ailments (early onset dementia, sleep deprivation, and glaucoma), he cannot drive or hold a job any longer. Even volunteering is out of the question, says the West Fork, Arkansas resident.

Not Your Typical Service Dog

Ibizan Hounds are not your prototype service dog, but they have served Shaw well.

“Our daughter, Lauren, had been researching dogs because my wife Christy grew up going to dog shows and obedience trials and thought it would be fun to get involved again in those sports,” Shaw says. “She pointed us to the Ibizan Hound. The uniqueness of the breed caught our eye; they are agile, have a loving personality, terrific athleticism and amazing diversity.

“We liked the possibility of lure coursing, hunting, and conformation, but never considered [service dog] work, since there was not a need at the time.”

The first Ibizan the family met was Pepper’s great-grandmother. Even though the Shaws own other dogs, Pepper is a life raft of sorts for Rob. “When I was told I could no longer work, I was devastated. I was just approaching 50 and spent almost two years in severe depression.”

When Pepper was born her mother was unable to produce milk for the litter, so the Shaws were forced to supplement feed the puppies. “At 2 days old, Pepper would not eat for anyone but me,” Rob recalls. “It made me feel needed.”

Pepper literally grew into her job as a service dog for Shaw. “She serves as my companion who helps distract and calm me from agitating situations in public and sometimes at home. She can sense when I’m getting upset or angry and will come to me, poke me with her nose until I look at her, then stay with me until she knows I am calming down. She has even done this with a veteran friends of ours, too.”

Pepper, Shaw says, encourages him to be more active and combat his anti-social habits, providing him a “purpose” in life.

A Dog Of Many Talents

The Shaws owned several other breeds prior to 2005 when they purchased their first Ibizan, prompting them to become involved in dog sports – conformation and rally/obedience. A year later, lure coursing beckoned.

Their Ibizan family now numbers eight, seven of which are conformation champions. And add to that two cats and two horses on their 80-acre farm outside of West Fork.

Pepper is a combined project of the husband-wife team. Rob trained the young dog at a local kennel club’s handling class, took Best Puppy in Sweepstakes at the 2013 National Ibizan Hound Specialty and finished the dog’s Grand Championship a year later. At that point, the show-ring stress became too overwhelming and Christy assumed handling duties.

They prefer to enter shows at which they are familiar with the layout and where they know someone else who is attending.

“I have a very hard time in tight crowds,’ he said, “where I feel I can’t get out of the building quickly. If I begin to feel overwhelmed, I will usually take Pepper out for a walk, if she is not scheduled to enter the ring soon.” On some occasions, he will return to his car or hotel room.

The bulk of Pepper’s competition is within a six-hour radius of home, although she has been entered in major events in California and New York, too.

Christy, Pepper and a family friend, Meegan Pierotti-Tietje, journeyed to the Westminster Kennel Club Dog Show in 2015 and ’16. “Meegan is our family’s best friend,” Shaw explains, “who I jokingly refer to as my dog-show wife. She is an Army wife, like Christy, so they are the best of friends and met at a dog show in Atlanta.”

Shaw acknowledges while Team Pepper was at Westminster this year it was difficult not having his Velcro partner alongside. “When it’s a big show, I know Christy will do a good job. And Meegan is on the phone daily keeping me updated.”

Lure coursing is primarily within the same six-hour travel radius, although Team Pepper’s competition calendar always includes the American Sighthound Field Association International invitational and the AKC National Lure Coursing Championship. Shaw is Pepper’s handler in this sport unless he is suffering from an intense headache. Pepper owns AKC Field Championship, Master Courser, and Lure Courser Excellent titles. In the process she has been awarded six Best in Field wins, which include two National Specialty AKC Best of Breed titles.

Plans call for Pepper to be bred this summer, hence her late 2016 show schedule is a bit uncertain. Target destinations are the AKC National Championship Dec. 17-18 in Orlando, Florida and the AKC Lure Coursing National Nov. 27 in Reidsville, North Carolina.

The Heart Of A Champion

The dog’s uncanny ability to segue from show to service never ceases to amaze the veteran. She is always in control of her turn-on, turn-off switch. But there’s the character side of Pepper, too.

“When it’s time to do her nails, she always flops on her back and sticks her feet up like she’s a little diva,” he laughs. And then there’s a longtime friend the Shaws visit several times a year. “She walks in his house like it’s hers,” the owner adds, “He always saves bones for her, which she promptly hides in the master bed.”

Conversely, Shaw recalls a time when he and the friend were discussing some events and both became upset. Pepper immediately sensed something was wrong and rushed to Shaw and began poking him, then placed her feet on his thigh and proceeded to poke his shoulder. “I responded by petting her and telling her I was OK. And, of course, my tone of voice changed, too. She then went to my friend, who was standing near his kitchen counter and began poking his leg, too. Next, she stood on her hind legs and placed her paw on his arm, gently repeating. He asked what she wanted and Christy said she wants you to let her know you are calming down. He began to pet her and thank her for her attentiveness.”

She returned to Shaw’s side for a final check, determining he was fine. Then she headed back to the master bedroom to tend to her bone collection.

“I can’t imagine where I’d be without Pepper,” he concludes. Their tight, frisky camaraderie has helped save a relationship, instilled a sense of worth and provided the key dynamics to “not let the disability own my life.”

Header image: At home in West Fork, Arkansas, Rob Shaw poses with Pepper, who serves as his service dog as well as competition mate, in conformation and lure coursing.

You have questions, we have answers. Download this e-book to get the explanations behind some of the strangest canine behaviors.
*Turn off pop-up blocker to download
AKC Privacy Policy
Founded in 1884, the not-for-profit AKC is the recognized and trusted expert in breed, health, and training information for dogs. AKC actively advocates for responsible dog ownership and is dedicated to advancing dog sports.