Olivia, a dog that was burned in the 2018 Camp Fire, is held by her owner after receiving fish skin treatment at the VCA Valley Oak Center in Chico, California.

Historically in veterinary medicine, dogs burned by wildfires have had few treatment options. But after a fast-moving fire incinerated a California town, canine burn treatment took an about-turn. Today, thanks to tilapia and a forward-thinking veterinarian with an unconventional idea, critically injured pets and wildlife can now look forward to a pain-free life. So, how did fish skin inspire a new approach?

Erupting at dawn on November 8, 2018, the devastating Camp Fire in Northern California scorched over 138,000 acres. The deadliest fire in the state’s history leveled the densely-populated town of Paradise, with 63 people losing their lives. To escape their blazing habitats and homes, animals sprinted helter-skelter through shooting flames, suffering smoke inhalation and severe burns on their faces, paws, and bodies.

Forty percent of the 500+ animals brought to nearby VCA Valley Oak Veterinary Center for assessment and treatment were dogs. Some went to other hospitals, and those who managed to survive endured months of agonizing recovery.

Four dogs near death at the VCA were chosen to receive a cutting-edge regimen to speed up the regenerative process. Perry the Great Pyrenees, Chopper the Dachshund, and mixed breeds Olivia and Max were the four canines chosen to test out the efficacy of fish skin bandages. 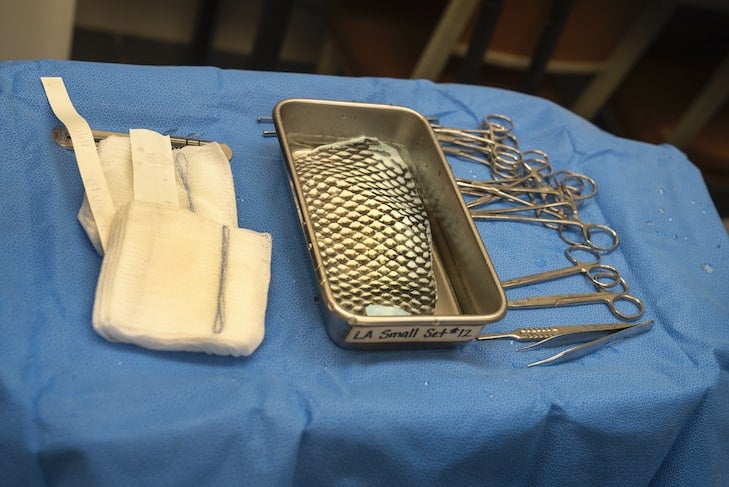 Jamie Peyton, DVM and Chief of the Integrative Medicine Service with the University of California, Davis, had previously attempted the regimen on three bears and a mountain lion after the 2017 Thomas Fire, but never on dogs and cats. Thinking outside the box and inside the crushed ice of her local fish market, Peyton substituted tilapia skin for bandages. But why use this inexpensive freshwater fish to repair second and third-degree charred hair and blistered skin?

“Tilapia skin acts as a dermal substitute that provides pain relief and protection and helps rejuvenate wounds faster and easier,” says Peyton. “With a high level of Type-1 collagen—a soothing protein—tilapia contains anti-oxidant properties within the skin itself. It’s easy to buy, disease-resistant, and sustainable.”

Without an established standard of veterinary care for treating burn victims, dogs often faced months of misery. Bandaged wounds require frequent dressing changes to avoid infections. When removing gauze and bandages, new tissue often sticks to the adhesive and peels off too, causing tremendous pain. During this process, the dog is heavily medicated and sedated.

“In the past, people would say that animals with severe burns would never survive,” says Peyton, who has evacuated from her home seven times due to wildfires. 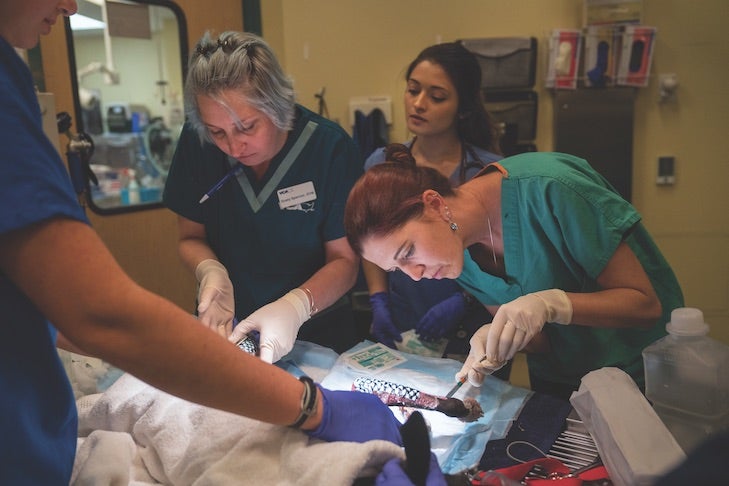 Applying fish skin takes special preparation. After the tilapia is sterilized and prepped, the thick, rubbery texture bends easily into place. Peyton and her assistant, Dusty Spencer, a veterinary surgeon at VCA Valley Oak Veterinary Center, medicate and sedate the dog before cleaning the wound and remove the dead skin. Strips of fish skin of varying thicknesses are then applied to affected areas.

“Every part of the fish was used, depending on the damage,” says Spencer. “Each case was different. We had to decide the best way to adhere fish skin to each wound, and how much pressure, range of motion, and wrinkles to apply.”

The 100-pound Perry endured severe burns on his supersize paws. The VCA team sutured tilapia around Perry’s four paws, but when he took a step, the tilapia skin split. According to Spencer, the solution involved simply wrapping a bandage on top of the fish skin. For extensive wounds, the piscatorial covering should be removed every three to five days to maximize efficacy.

“The tilapia skin adheres to the wound, and often it falls off on its own like a scab,” says Spencer. “New skin can begin to grow within five days, while regular bandages take weeks for the new skin to cover the wound.”

When Olivia saw flames inside her home, the pup lept through the dog door and into the yard. After the outdoor fencing melted, she sped away. At the time, her owners, Curtis and Mindy Stark, were in New Jersey to celebrate a wedding.

“We received a text from the pet sitter that the roads were gridlocked and she couldn’t reach the house,” says Curtis Stark. “We assumed Olivia perished in the blaze. But six days later, the Chico Police found her two miles away and took her to VCA.”

A microchip reunited Olivia with the Starks’ daughter. Lethargic and dehydrated, the dog lost six pounds and sustained second- and third-degree burns over 30 percent of her body. Olivia underwent a month of surgeries, 30 days of tilapia skin grafts, and daily care.

“After receiving the grafts, we noticed a huge difference in Olivia’s attitude,” says Stark. “She was less mopey and a few months later, she was back to herself. We may have lost our home and our possessions, but as long as we have our dog back, it’s OK.”

“It’s inspiring that we can treat dogs with severe burn injuries and they can survive,” adds Peyton.“Tilapia is a testament to helping other animals and their owners.” 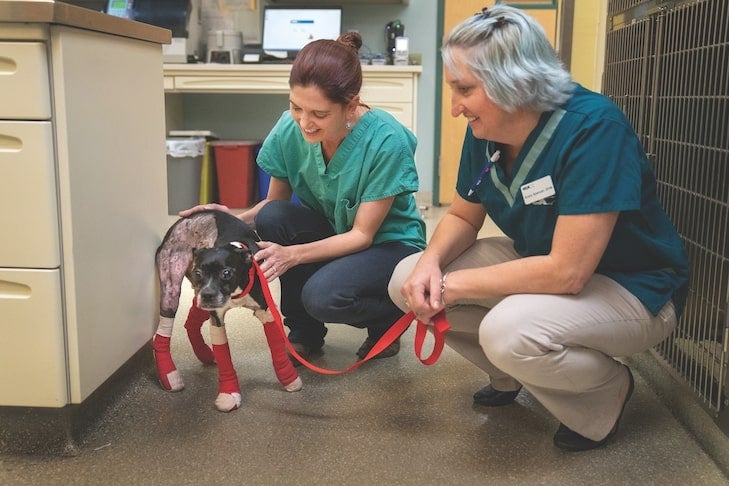 Spencer and Peyton check up on Olivia, who showed marked improvement following her fish skin treatments.

A xenograft, or biologic bandage, uses a species different than that of the patient. Fish skin comes from a living organism, optimizes the immune response, and more closely resembles the dog’s skin than a traditional bandage.

“Researchers looked at deriving a biologic skin from cows and pigs, but these animals carry more risk of infection and are not easily sourced,” says Peyton.

Don’t Try This At Home

If boiling liquids, asphalt, or fireworks accidentally burn your dog, take them to a veterinarian. Don’t even think of purchasing a pound of tilapia or any other fish at your local supermarket and wrapping it around your dog’s injury at home.

The finny elixir needs prepping before it goes to work, but the precise process is top-secret. After sterilizing the skin, Peyton puts it through an intense laboratory procedure lasting several days. The processed skin is firm, but feels smooth and cooling on the pet’s skin.

The veterinarian developed a protocol for applying the special covering and the University of California, Davis, School of Veterinary Medicine filed a patent application on the technology.

“In the future, we hope to make the tilapia product accessible and affordable for other veterinarians to treat brush fire and abused burn victims,” says Peyton. “This untapped resource is one aspect of how we’re trying to improve wound and burn care.”

This article first appeared in the November/December 2019 issue of AKC Family Dog magazine.