The Heartwarming Story of Fidelio the Miracle Bergamasco 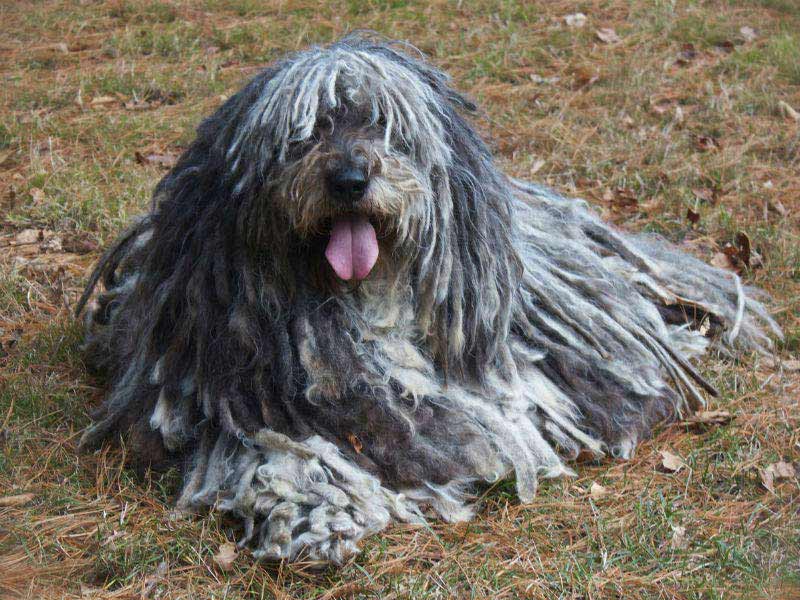 Fidelio means faithful in Italian. In English, it’s Fido. And, oh, how appropriate that tag has proven to be for this 6½-year-old, 75-pound Bergamasco show dog. No flash and flair here. More substance and survival.

Remember sportscaster Al Michaels’ terrific call in the waning moments of the U.S. hockey team’s epic win over the Soviet Union at the 1980 Olympic Games in Lake Placid, N.Y.: “Do you believe in miracles?”

For owner Irene Senedak, of Hamden, Conn., this characterizes the nine-day odyssey of angst and apprehension she experienced in October 2010 following a horrific, early morning auto accident near DuBois, Pa.

She was returning home from a show and a visit to her family home in Vienna, Ohio, with three adult Bergamascos and three six-months-old puppies.

“In the cold, raw drizzle, I rounded a bend on Interstate 80 and saw a deer wandering around in the middle of the freeway,” she recalls. “I tried to slow down and steer to avoid hitting it, but my minivan began to swerve and whip around violently, spinning out of control and rolling over once. It finally came to stop facing traffic alongside a rocky embankment.”

Senedak received a gash on her head, but never lost consciousness. After locating her glasses to see what she could do next, she was relieved to see Essa—Fidelio’s and the other pups’ mother—unharmed in the passenger seat where she had been sleeping peacefully.

However, in the unfolding horror, she realized that all of the other dogs had been thrown from the vehicle, and that the roof had collapsed in on the entire back seat and cargo area. Next, she managed to secure Essa and pry open the driver’s door.

“Another driver who stopped to help, took it out of gear, turned the engine off, and tried to keep me close until paramedics arrived, while I began calling and searching for my dogs,” says Senedak.

Soon, the state police and paramedics arrived to render assistance. The state police, she says, escorted her nearby to the site where her other beloved Bergamascos, Aria and Nina, mother and daughter, were lying dead.

A short time later the troopers drove her to a nearby motel, where she began making phone calls and asking if anyone could return her to the accident site to begin searching for her three puppies, Fidelio, Figaro (Figgy), and Forte.

A motel employee, who was a huge dog lover, found warm clothes for Senedak, and as soon as her shift was finished helped her search the area near the crash. “Within 10 minutes, I found Forte, shivering and shaking and hiding in the weeds not two feet from I 80. He had a deep wound to his elbow,” she adds.

She and her husband, Mark Kuss, who drove to the wreck site from out of state after receiving a call from Senedak, rushed Forte to a nearby veterinary hospital for treatment, then returned to search throughout the day and evening for Fidelio and Figaro without success.

Meanwhile, word spread quickly throughout the community about their need for search-and-rescue help. “I cannot even comprehend the extent to which the community came to our assistance. Strangers helped with the search, posting flyers and starting a blog for possible sightings in the area. The networking was incredible,” she enthuses. “Their kindness changed my life!”

A woman drove from Connecticut and back in her van with camping gear for Senedak and a friend, when they needed a few hours of rest and to provide transportation back home for the pups should they be found alive.

Several days after the crash, a local family spotted Figgy in the woods and transported him to yet another family’s home, where they provided him food, water, and blankets, in addition to plenty of TLC. He was skinny, covered with burrs, and bruised, but did not sustain any major injuries.

The puppy tally was now two accounted for and one (Fidelio) missing. “As the days went by, I faced an increasing awareness that I might never find him,” she emphasizes, “and never know his fate.” This left her distraught at times, but recognizing the need to maintain hope, particularly with “all of the amazing community” continuing to provide assistance, some afoot, others on motorcycles, setting up shelters and leaving water and food dishes out for him should he be scared and curled up in the woods nearby.

Ultimately, a local resident taking a back road to work found Fidelio. “He told me Fidelio came right up to him, flopped over at his feet, at which point he went to find food and water for him.” The rescuer, in turn, took Fidelio to a police station nearby, from where the dog was transferred to an “incredible young couple, who took him in and provided him food, water, and much love, then arranged to drive with him to a meeting spot so Mark could bring him home.”

Fidelio suffered a spinal compression fracture and hip injury from the accident, but recovered and eventually blossomed into a quality show contender (he is a consistent breed winner and owner-handler group placement finisher), competing at such upper-level events as the Westminster Kennel Club Dog Show and the National Dog Show presented by Purina.

Between traveling to shows and enjoying a cherished dog’s life—running in the woods, giving hugs to everyone he meets, hanging out on the couch, roughhousing with fellow four-legged family members, and even riding in the car—this survivor is living life to its fullest.

Senedak has been involved with the ancient and versatile Bergamasco breed for 17 years as an exhibitor and breeder. She has worked with her dogs in conformation, therapy work, and herding. Prior to purchasing her first Bergamasco, she owned a Belgian Sheepdog and a Scottish Terrier.

After one of her dogs passed away, Senedak was on the hunt for another herding dog—and wanted to find one with a unique appearance. A lengthy pre-Internet search in books and magazines brought up the Bergamasco, and, voila, Senedak knew immediately this was it! But she was forced to maintain patience aplenty for 1½ years, until a puppy became available. At that point there was only one breeder in the U.S., Donna DeFalcis, who became Senedak’s chief mentor.

For Senedak, Fidelio’s powerful narrative has been a sobering, but grateful journey of psychological turbulence, accented with a colorful blend of emotional tailwinds and headwinds, all with plenty of gusto and the joy and appreciation of simply being alive.

“This breed is highly intelligent,” says Senedak, a 54-year-old professional musician, “and is an independent thinker. It is a terrific herder and family dog, all in one. It needs careful guidance and a well-reasoned training approach, so it doesn’t apply its instincts to rounding up the neighborhood kids or outsmarting its humans. It does, however, have an off button and knows how to chill.”

This music teacher/pianist finds sharing her life with the dogs amidst a busy, sometimes stressful, but richly rewarding career has kept the world in balance for her.

The Bergamasco’s most distinguishing feature is its dense coat, which changes as it ages, from the adorable, fluffy puppy to the rough-and-tumble adolescent mid-coat look to the regal full-coated adult. Three kinds of hair interweave to form the flocks all over the body that are characteristic of the older dog. The coat is non-shedding and hypoallergenic, making it attractive for those with allergies and also for therapy work in hospitals and convalescent homes.

The ancient Italian breed is a relative newcomer to AKC ranks, having just been recognized in 2015.