A Conversation with Doug and Michaelanne Johnson, Bugaboo OES 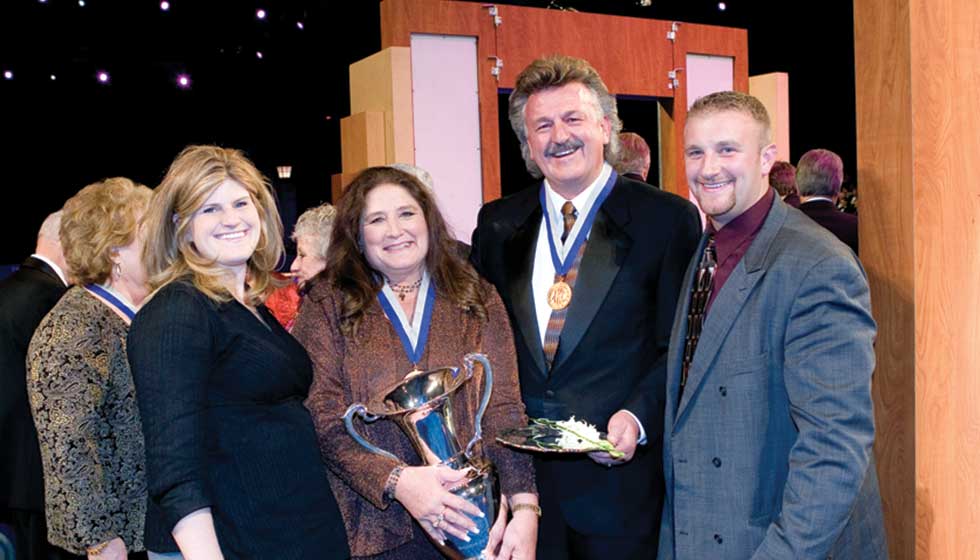 How did you start breeding Old English Sheepdogs?

Michaelanne: The OES was my dream dog as a young girl. When Doug and I got married, I was looking at ads for houses and there was an ad for Old English Sheepdog puppies for sale. We went to see them—just to look—and Doug purchased my first OES puppy for me.

Doug: That was 1972. As far as breeding them, it wasn’t until we met Edie Shields, who was our mentor, that we made any progress. She actually started Bugaboo Old English Sheepdogs.

What was the biggest mistake you’ve made in breeding?

Michaelanne: I’ve never looked at things as mistakes. Even with a well-thought-out and carefully planned breeding, you can’t say there aren’t going to be any problems or complications, because there always are. The hardest thing is trying to stay strong. There can be some heartbreaking moments when you're breeding dogs, and we’ve experienced them all. We’ve lost dogs to bloat, we’ve lost an entire litter … There have been times when Doug and I have thought, Why are we doing this? But then something would happen, a wonderful win or a litter of puppies that were exceptional, and we’d say, “Well, this is why.” But if we didn’t have the support of our family, and our kids, I don’t know that we would still be at it.

Would you say there are challenges specific to breeding OES?

Michaelanne: The most difficult thing is the amount of grooming it takes to keep them in competitive form. It is the hardest thing for people to learn how to groom and maintain an Old English properly. Doug and I aren’t seeing a lot of new young people in the breed, and we think the reason is that OES is such a labor-intensive breed.

Is there anything you, as breeders, can do to encourage young people to get involved with OES?

In our breeding program we’ve worked with several other notable breeders: Pam Henry, with Blu Mountain Old English Sheepdogs; Colleen Grady, who’s president of the Old English Sheepdog Club of America and has Snowdowne; and Terry Carter, who’s up in Canada.

Michaelanne: And Bridget Callahan, who’s my co-breeder in Wyoming and my dearest friend.

Doug: If we do a breeding, we generally take a puppy ourselves, and they take a puppy, and then another person will take a puppy, and we’ll grow those puppies up to see which ones turn out and which ones don't. When we try to find show homes for a puppy, it’s real difficult, because most people buy a little black and white puppy, and it’s real cute until it gets to be about 8 to 10 months of age and starts going through a coat change. The coat will mat, and get tangled, and it’s quite a bit of upkeep. At that point most people say, “We just want to love the dog, we don’t want to show him, and we’re not interested in the breeding aspect of it.” We probably get one person out of maybe 15 or 20 that we sell a show dog to who actually continues on into the show ring.

What usually happens is that new people come into a dog show and they don’t win, and other people with more experience don't share their knowledge with the new people, and they get frustrated and end up backing out of the breed. It's the broad knowledge of our breed club that we need to share. We need to educate, and we need to be happy and show good sportsmanship to encourage new people to continue on.

What other challenges do you think breeders face today?

Michaelanne: I think the hardest thing the purebred dog fancy faces right now is that it’s difficult for breeders to maintain the number of dogs necessary to have genuine longevity in breeding. I feel that’s been our success, that we’ve been able to run on from each litter two or three of the exceptional ones and been able to carry on with breeding, whereas a lot of people, because of the restrictions on the animals they can have, can only do a breeding every now and again and can only keep one puppy. That’s like putting all your eggs in one basket, and it doesn’t always work out for them.

Bugaboo has influenced the OES around the world; what would you like to leave as your legacy to the breed?