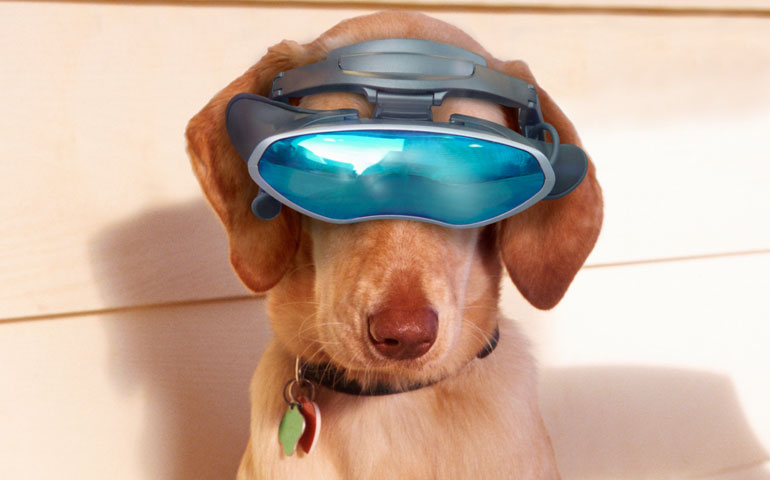 When it comes to dogs, the future is now.

In the film Back to the Future II, Marty McFly, his girlfriend, and Doc used a time machine to send themselves to October 21, 2015—30 years ahead of the year they live in, 1985.

The future, as imagined in the ’80s, didn’t get it all quite right—we don’t have flying cars, yet—but some are surprisingly spot-on. For example, a drone walking a dog, which appeared in Back to the Future II, actually seems to be a reality.

Walking Dogs With Drones from Jeff Myers on Vimeo

So now on October 21, 2015, we look at look at recent advancements and inventions in pet-related tech to see how far we’ve come in the past 30 years:

GPS Devices and Wearable Tech: With the wide selection of wearable tech products on the market (for example, LinkAKC) , you can now learn not only where your dog is at any given time, but also his heart rate, how much he’s eaten, how active he’s been, if he’s stressed, if he’s sleeping, and so on. Some devices allow owners to interact directly with their pets, and one, No More Woof, which is still in prototype form, reads your dog’s brain activity to learn what he’s thinking and communicates it to your smart phone. Would Marty McFly have ever predicted talking dogs? We think not.

Robo Dogs: The reality of the robot dog has come and gone and come back again.In 1999, Sony released a commercially available robot dog named Aibo (short for “artificially intelligent robot”), which was extremely popular in Japan. Unfortunately, Sony discontinued them seven years later, and two years ago, the company stopped repairing the old models. Other companies have tried to replicate the once-trendy device but most notable is recently when the U.S. Marine Corps tested a 160-pound robo dog at tasks typically performed by live K-9s. For instance, the “dog,” named Spot, was able to enter and secure a building before Marines and carry equipment across various types of terrain.

3D Prosthetics: Speaking of robo dogs, in recent years, we’ve seen dogs get a new leg on a life, literally, through the advancements in 3D printing. In December 2014, a two-legged dog named Derby made international headlines when he was caught on video running for the first time after being fitted with two front prosthetic legs created by 3D printing company 3D Systems. Since then, other dogs have benefited from this technology, including a disabled young Dachshund named Bubbles, who was fitted for a 3D-printed cart. And college students at Xavier University got the opportunity to create a prosthetic for a service dog–in-training with the school’s 31 MakerBot Replicator 3D printers.

As for those dog-walking drones? It’s not a good idea to try at home. The drone is neither able to prevent your dog from being hit by a car nor able to deflect his attention should he spot a squirrel, child on a bike, or other possible distraction. And you’d run the risk of the leash being caught in the device. In this case, technology has a long way to go—and the safety of your pet is worth the wait.