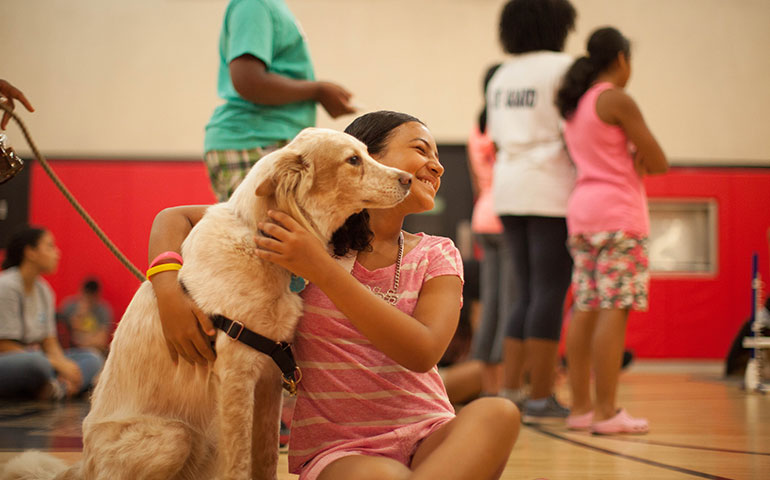 For many at-risk youth in New York City, violence and crime is an inescapable fact of life.

But Audrey Hendler is hoping to change that, with the help of about 25 four-legged teaching assistants.

In 2010, Hendler launched A Fair Shake for Youth, a program that brings therapy dogs into middle schools in under-served communities of New York City to teach children empathy and responsibility and help prevent bullying.

“I was blown away by the impact the dogs had on the inmates,” Hendler says, adding that she saw the prisoners gain self-esteem and compassion. “But I wondered, ‘Why are we waiting until people are grown up and in trouble for dogs to have this effect on them?”

She gave up her marketing consulting business to start the program, which has since grown to be in 10 schools and community organizations in Manhattan, South Bronx, Brooklyn, and Queens. Hendler found that middle school reached kids in the sweet spot of being old enough to understand important information about dogs but also young enough to be open to bonding with dogs and their handlers. “Having an adult tell them they’ll be back next week and then showing up is a big deal to these kids,” explains Hendler. “Adults aren’t always a consistent part of their life.”

The program runs one day a week for about 10 weeks with 12 children and two to three dogs. The children learn everything from socialization and basic training to dog body language and cognition to agility. Hendler also invites guest speakers to do presentations, including a veterinarian who grew up in the projects and put himself through veterinary school after working as a dog walker made him realize his passion for animals. Another guest was Hooper, a Hurricane Katrina rescue dog, who inspired a book, Hooper Finds a Family: A Hurricane Katrina Dog's Survival Tale.

During the time they spend with the dogs, the students learn to relate the dog’s struggles or experiences with ones they have themselves. “A lot of what we talk about is prejudging,” Hendler explains, using an agility demonstration in which one dog excelled at tunnels and another at jumps as an example. “We talk about how a lot of bullying is based on prejudging instead of realizing that both dogs and human beings are different and respecting what they bring to the party.”

The dogs also help children gain confidence and realize they’re being heard. Hendler remembers one child asking a dog to sit over and over again and being astonished when the dog followed the command. “No one had ever listened to her before,” Hendler says. “These kids often don’t feel like they have a voice or can make an impact.”

The participating dogs are a mix of large, small, purebred, mixed-breeds, and rescue dogs. There’s a retired racing Greyhound, a Cavalier King Charles Spaniel, a Bulldog, and more. What they share in common is a calm temperament and the willingness to work. “These dogs are social and want to be out there doing good things,” Hendler says. “They seem to know they’re helping.”

The popularity of the program has resulted in a waiting list of schools, and Hendler is currently seeking owners and dogs who want to volunteer. Owners interested in participating in the program can get more information here. Dogs should be certified therapy dogs and/or have passed the Canine Good Citizen test and will be screened by Hendler (who is also able to test dogs for CGC).

See the program in action in this video: