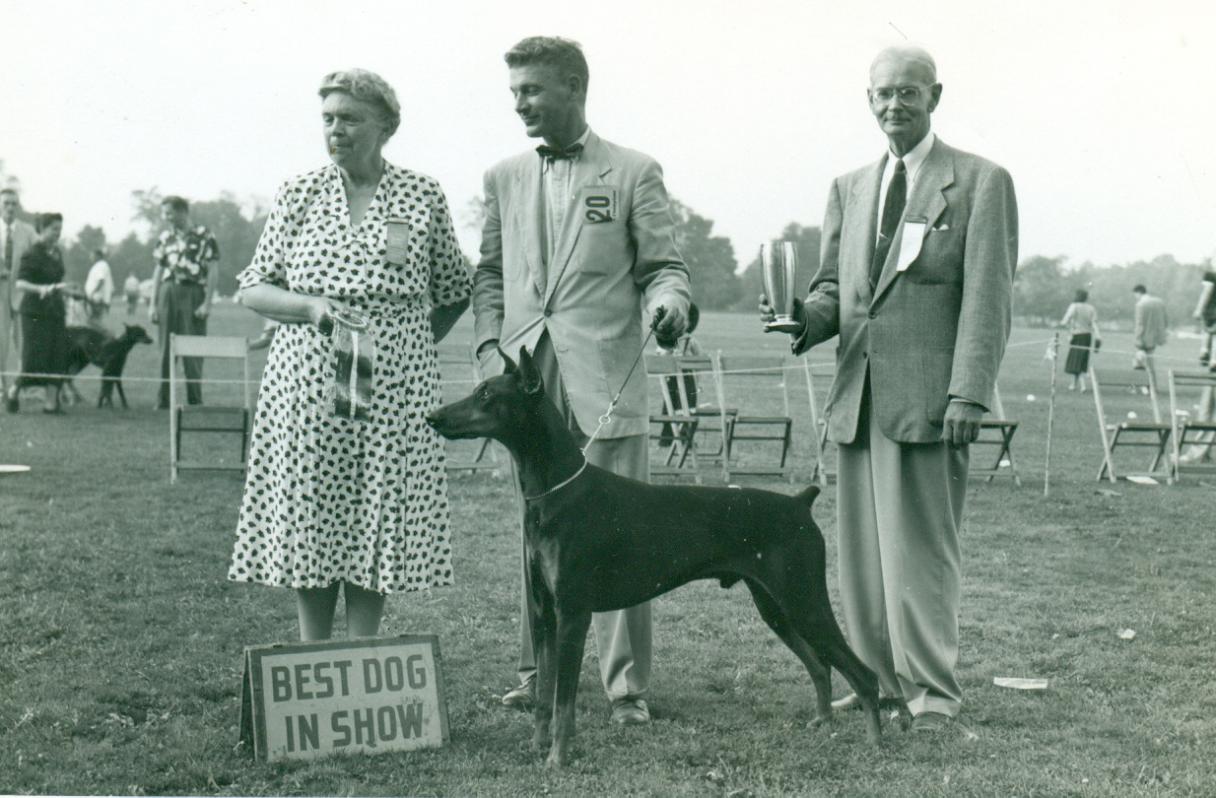 Doberman Pinscher Club of America National is a time when the Doberman family unites to celebrate our breed. Here are some highlights of our 2014 event. It was a whirlwind week of shows, parties, meetings, seminars, and shopping for everything Doberman. Here are some of the highlights. The event area was ready for the “showdown in the heartland.” Decorating committee chair, Glen Lageski, and Hillary Zimmerman and Peter Holson did an amazing job. The ring had hay-bales topped with Indian blankets and saddles for ring stanchions, holding up thick rope, surrounded by flowers and pumpkins. It looked Western-glorious and remained great throughout the week. Many mornings you could find Glen watering the flowers.

Saturday started with my husband judging the regional. Sunday was another long day of judging. Monday began with a WAE test, breeder and working dog seminars, agility trial, and heart clinic. Lunch featured a members buffet feast and our first-ever “Honor the Effort” photo shoot. We recognized everyone who put a title on their dog during the 2013–2014 year, along with the breeders, show committee, and committee chairs. We know how hard it is to achieve, and the national is the perfect place to honor that effort. Show photographer Tom Weigand took pictures of each group of recipients.

The general meeting followed. That evening we celebrated the Top 20 in conformation, and the stars were out for this black-tie event. Everyone was dressed impeccably, and people and dogs were looking good. Tuesday was a day of seminars for breeders, exhibitors, and fanciers, agility and rally trials, chapter club meeting, and CHIC blood draw. At 4 P.M., the Generation Forward committee hosted its first meet-and-greet. We served appetizers and everyone had to find their corresponding number (on their nametag). It was a good icebreaker, and everyone met people they hadn’t known before.

Following the meet-and-greet, the Generation Forward had its first Round-Robin Tournament. Chair Charlene Dunnam and members Malory Ross, Mallori Nickerson, and Leah Petesch arranged a great event. The trophies were beautiful, and everything went smoothly. The first judge was Cindy Huckfelt, and each class winner thereafter judged the preceding class until the finals, when Michelle Santana judged Best in Tournament. We had over 30 entries, and people enjoyed this new activity.

Afterward we adjourned to watch the Agility Top 20. These dog and handler teams are amazing. Some dogs were retiring, and many were over 10 years old. Wednesday was futurity day. There were obedience, agility, and barn hunt seminars. Afterward there were many meetings to attend, and the ever-popular international meeting. Hiroko Lee has turned this event into a party, and it is well attended and enjoyed by all. That evening the Top 20 obedience contenders competed for the honors. What a great group of competitors.

Thursday was dog judging. Later we hosted the health seminars. At dark, we had another first-time activity, a night walk. Doug and Jackie Matson prepared a fun walk, through 10 stations in a park-like setting. It was great fun to see how the dogs reacted to the new stimuli. This will be a must-attend event at future nationals. Friday was bitch judging and the judges’ education seminar. That evening we enjoyed the ever-popular Cope banquet. Dogs and people were honored, and lots of money was collected for rescue.

Saturday saw the culmination of the show with Best of Breed judging. Adrian Woodford sorted through 140 dogs and came up with very worthy winners. Afterward we had a wrap-up pizza party ringside. It was an exciting week! For a detailed list of judges and winners, please go to dpca.org/shows/results/2014.htm. I can’t wait for next year’s national, when we award our first class of Legacy and Apex winners, honoring our stud dogs, brood bitches, and breeders.

Together we can do amazing things. See you in Lancaster. —F.S. (January 2015), Doberman Pinscher Club of America