Do Dogs Prefer Praise or Food? Unlocking the Mysteries of the Canine Mind 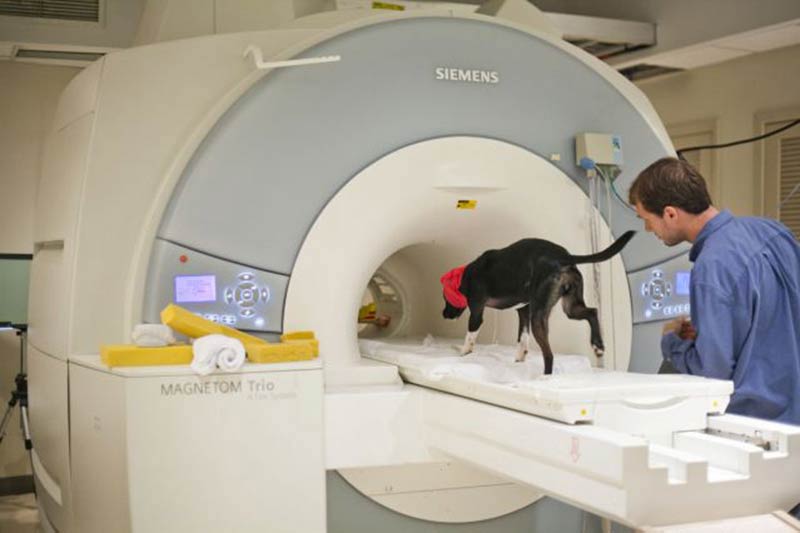 How do you know what your dog is thinking? Give him an MRI, of course. While this isn’t practical for the majority of dog owners, for the past five years Dr. Gregory Berns and his colleagues at Emory University have been training dogs to lie still while awake in an MRI scanner, so that they can study the dogs’ brains.

A goal of Dr. Berns’ research is to learn what dogs think about humans, and his latest study, published in the August 2016 issue of the journal Social, Cognitive and Affective Neuroscience, explores how dogs react to food rewards versus praise from their owners. The purpose of the study was to examine whether the dogs’ brain scans could accurately predict their behavior—which they could—but the data also provided some interesting insight into how dogs feel about social interaction with their owners.

All of the 15 dogs that participated in the study were pet dogs living in the Atlanta area, not research animals. The owners and dogs volunteered their time and put in several months of training before the experiment even began. The dogs had to learn to enter the confined space of the MRI tube, rest their chin on a small platform, and hold still in a down-stay for the duration of the experiment, all while wearing earmuffs to protect them from the loud noise of the machine. The training was done with positive reinforcement, using play and food to form pleasant associations with the testing situation.

The experiment involved functional MRI technology, which measures the activity of neurons in the brain. This is the same technology that has been used with humans for 20 years. Although MRI technology involves using an extremely strong magnetic field, it’s completely safe for the dogs.

This method is effective with dogs, as well as humans, because in many ways the brain of a dog looks and acts similarly to the brain of a human. Many of the basic structures are the same, including an area that is related to positive emotions. This has allowed Dr. Berns to study the relative value individual dogs place on food and praise, based on the activation of a particular area in their brain known as the ventral caudate.

For the first part of the study, each dog’s brain activity was measured after the dog was shown a toy horse, a toy car, or a hairbrush. The dogs had previously learned that the horse would be followed by a piece of hot dog, the car would be followed by their owner walking in front of the MRI tube and praising them, and the hair brush would be followed by nothing. So the level of activation in their brain when they saw each object indicated the value the dogs placed on the reward that each object represented.

Surprisingly to those of us with food-motivated dogs, most of the dogs studied had basically the same response to the car as to the horse, meaning they ranked the value of the praise and the food equally. In other words, they were just as pleased with the anticipation of their owner’s praise as they were with the anticipation of the hot dog. Two of the dogs rated the food higher, and the final four showed a preference for the praise.

A second part of the study, which involved withholding the praise reward, confirmed the results seen in the first experiment. A final phase involved taking the dogs out of the MRI machine and observing their behavior. To see how they would choose between a bowl of food and a brief petting session with their owner, they were placed in a “Y-maze” where they could choose to walk right towards one reward or left towards the other. The earlier brain scans accurately predicted the choice each dog made, with the food-preference dogs choosing the food, and the praise-preference dogs choosing to spend time with their owner. The dogs that hadn’t shown a preference earlier were harder to predict and showed a wide range of behavior.

It’s exciting to realize that a dog’s brain scan can be an accurate predictor of behavior. But on a practical level for the average dog owner, the knowledge that an owner’s praise and company may be as valuable as food has interesting implications. We know that dogs like to eat, yet social interaction with humans is obviously quite important, too, and for some dogs potentially more important than food treats. Preference differences between individual dogs might be based on breed, training, and socialization history, or even genetics, but that’s a question for future experiments.

The study reports, “Our findings support the use of social praise as a reward in dog training.” Many positive dog trainers have long been singing the praises of using more than food in training. The use of life rewards, such as a walk or access to the backyard, can be very effective, and toys, games, and cuddles fit easily into a training session. Taking this a step further, could dog owners possibly achieve the same results in a positive training program with praise alone rather than food? It would certainly save money and help keep our dogs’ waistlines trim. With the right dog that might turn out to be the case.

But did the study really show us that some dogs prefer praise? Or did it show that dogs love the company of their humans? In all three experiments, the dogs could see, as well as hear their owner, and in the Y-maze they interacted with them physically. Previous studies have shown proof of the dog-human bond. The association of the owner with food could have also played a role in each dog’s response to the praise. After all, it’s humans who load a dog’s food bowl every day. And most dogs learn that the best way to fill their tummy is through interacting with people.

So it’s tricky to tease apart a preference for people over food. Even when we train our dogs, it’s almost impossible to use food without also rewarding them with social interaction. Perhaps the true takeaway from this study is not to undervalue the power of your presence in the world of your dog.

What we can say for sure is that some of the dogs preferred socializing with their owner, others would have preferred to have a treat, and the rest were happy with either one. If you take the time to watch your dog, you should be able to pinpoint which camp he falls into. Then you can incorporate his preference into your time together, creating a more effective training program and a happier dog.