Dachshunds in the News! (Oktoberfest Edition) 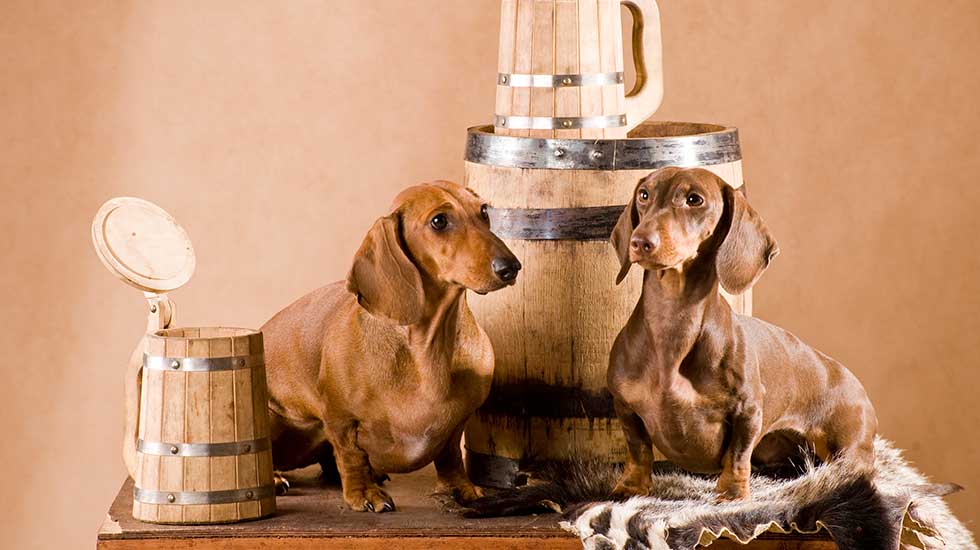 Dachshunds are bound to pop up anywhere, doing anything. But who has time to keep track of all those Dachsie doings? As a public service, AKC Dog Lovers goes around the corner and around the world to bring you (cue deep-voiced announcer with lots of reverb) DACHSHUNDS IN THE NEWS!

EL PASO, TEXAS—You never know where the next outbreak of all-out Dachsie chaos will occur. Southwest University Park, home of triple-A baseball’s El Paso Chihuahuas, was the location of this summer’s most hilarious Dachsie moment of mayhem. It all started, innocently enough, during a pregame “wiener race.”

“Dachshunds in the News” generally frowns on organized Dachshund racing, for several reasons. Our friends at the Dachshund Club of America agree. (See the club's policy statement.) But if you just can't resist the sight of those little legs pumping away at approximately 3 miles per hour as they scamper toward the finish line, we recommend staging the race the way the organizers of this event did: The “course” was only a few feet long, on soft grass, with no turns. What could possibly go wrong?

BONN, GERMANY—From our “Names for Things We Never Knew Had Names” desk comes this informative item from Deutche Welle (DW), Germany’s international news service. Did you know there was a word for those toy Dachshunds you see nodding their heads in a car’s back window? In a recent installment of their “Word of the Week,” DW explains:

“Created in the 1970s as an accessory for German cars, Wackeldackel are short-legged, long-bodied bobbing dachshund toys that usually sit in the rear window of a car and wobble their heads with every bump on the road.

“Wackeldackel celebrated their comeback in the late 1990s when the gas station Aral used a Wackeldackel in an advertising spot, leading to more than 500,000 of the bouncing dogs to being sold within eight months.

“These days you can also use the word Wackeldackel as a metaphor for a person who always agrees with their superior and dutifully nods their head to whatever the boss says.”

And now this helpful tip from our German fashion correspondent, Ahmin Lederhosen:

Does your divine Dachsie look lumpy, frumpy, and downright dumpy in off-the-rack dog clothes? If so, visit The Savvy Dachshunds, who specialize in custom-tailored apparel for the hard-to-fit Dachsie torso.

“We’re passionate about Dachshunds so the idea for custom pet clothes for the breed came easily to us,” a company press release says. “After all, these are dogs that look absolutely brilliant in a sweater; they tend to get cold easily so there’s a big need for dog clothes that fit them well.” Just in time to spruce up your wunderbar wienie’s look for the fall Oktoberfest season! Haute dogs, anyone?

Finally, from our Retro News archive, dateline GERGWEIS GERMANY—An entire town is overrun by Dachshunds! It’s Wienerworld! It’s Dachsopolis! It’s The Big Dapple! A place where even cats must bend to the Dachshund’s iron will! Impossible, you say?

Join us next time, when the Dog Lovers news-hunds will again span the globe in search of DACHSHUNDS IN THE NEWS!