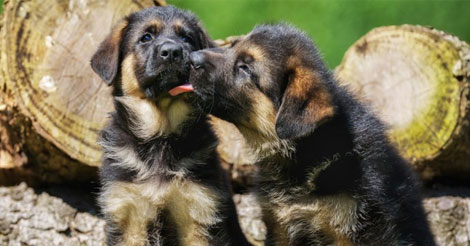 The Royal Canadian Mounted Police (RCMP) are seeking the help of the public to name up to 13 puppies expected to be born this spring. The puppies, all German Shepherd Dogs, are bred at the Police Dog Service Training Centre in Alberta, Canada.

“RCMP police service dog teams are an integral part of front line policing,” the training center’s website explains. “They search for missing or lost people, track and apprehend criminals, remove illicit drugs from the streets, detect explosives, and search for and recover evidence used in crimes.”

Each litter is named through the “Name the Puppy” contest, which is open for Canadian citizens 14 years and younger. The names must start with the letter J and cannot be longer than nine letters or two syllables. Children who pick the winning names will receive a laminated photo of the puppy who gets their name, a stuffed animal, and an RCMP keepsake.

The contest ends March 22, and the names will be announced April 26.

Read about two Bloodhound puppies who have begun training to work for the Henderson County Sheriff's Office in North Carolina.