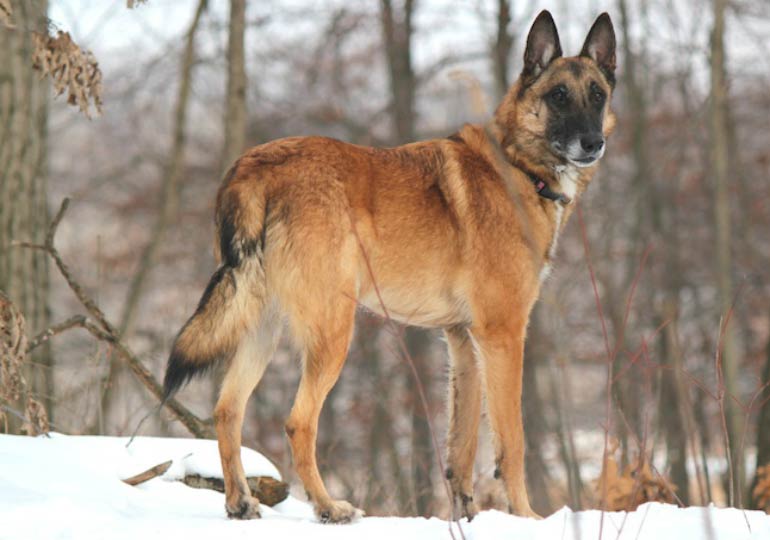 Like 300,000 other Americans, I got a hip replacement this year. When I returned from the hospital, my full-on Ferrari of a Belgian Malinois was there to greet me.

I cannot imagine that he “knew” about the surgery, but he was aware that something was different. He was unusually calm and gentle, never jumping, lying for hours at my bedside without complaint. When I took my first, tentative outdoor walks, he patiently plodded along beside me at a snail’s pace. His usual reflexive reactions to everything were muted.

The author and Scotch, one week post-surgery.

But Scotch offered more than just his company. To prevent dislocation of my new hip, I was not allowed to bend over for 12 weeks. This was a considerable inconvenience. I never realized what a large proportion of the things I pick up end by slipping through my fingers and landing on the floor—where I now had to simply leave them.

Eventually it occurred to me that I have a dog who retrieves dumbbells. Could he not help with my predicament? We spent about five minutes on “how to pick up a cane,” but once he mastered that, all the other oddments that I dropped were easy: rubber bands, asparagus, scraps of cardboard, car keys, crumpled paper, mail, clothing, cans, towels, and even a hot dog (still intact!).

Scotch quickly learned to pick up the “grabber” tool, as well as all manner of dropped objects.

While it’s true that I had a mechanical “grabber” for picking up dropped things, when it came to shopping, it was pretty difficult to carry a grabber, a purse, and a cane and still have any hands left to get things off store shelves. So I wondered if Scotch could be my service dog.

The Americans with Disabilities Act says that only two questions can be asked about a service dog:

I thought it over. Pretending to have a service dog to get him a free pass into forbidden places is an abominable practice. Further, my dog was not certified by any organization except the Organization of Me. I finally decided that what I meant to do was OK. I was not using assistive devices because I wanted to, but to support my recovery from surgery.

So I plucked up my courage and marched Scotch into the store with me. Near the customer service desk, I managed to fumble my cane, which fell. It hit the hard flooring with a bang that turned heads. Scotch promptly picked it up. As he did, I heard voices: “Oh, look, a service dog! He picked up her cane!” I felt a little more comfortable. We shopped in peace, and I was glad for Scotch’s help retrieving the three or four items I managed to knock off the store shelves.

Scotch has now been to many businesses as my helper. His presence was never questioned, and he always displayed impeccable manners. He was unusually calm. I believe that Scotch likes this job, and the close working relationship it entails. He is willing to accept the slow-motion walking and the constant requests that he sit, or down, or stop and be leaned on, or pick something up. I would never have guessed this about my hard-charging, energetic Malinois.

Scotch's constant companionship and help during the rehabilitation resulted in a closer connection between dog and owner.

I think he will be sorry when I throw away my cane, and I’ll be a little bit sorry too, though not sorry enough to keep using it, and not sorry enough to employ him as a service dog when he isn’t needed. Maybe we can find another way to keep that extra closeness we developed. And maybe, just maybe, he can still learn to pick up the only thing he ever refused: an orange peel.

Before the author's hip surgery, she and Scotch performed a canine freestyle demonstration at the Belgian Malinois national specialty. The two are now working on a new routine.