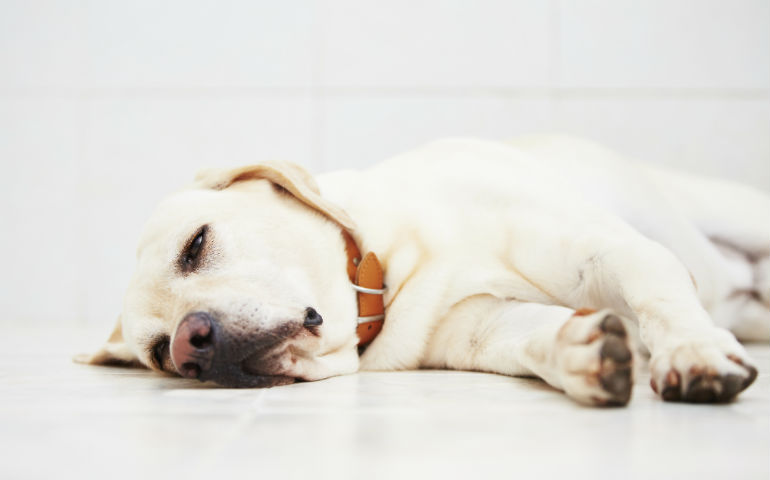 In early March 2015, there appeared to be a significant outbreak of Kennel Cough in Chicago. Our hospital, a 24-hour emergency and critical care facility, regularly sees a high volume of sick and injured dogs and cats. But what we were seeing in Spring 2015 was different.

Suddenly, a large number of coughing, sick dogs started to appear in area veterinary clinics in the heart of Chicago and on the city’s northside. The majority of these dogs were initially alert, with a hacking cough. Most hospitals treated these dogs for “Kennel Cough” or infectious tracheobronchitis. Kennel Cough is the non-technical term used for a syndrome of contagious coughs encompassing various bacteria and/or viral etiologies, such as adenovirus 2, canine parainfluenza, Bordetella, and Mycoplasma. It was termed “Kennel Cough” due to the contagious nature of the illness: when one dog came down with a cough, within a short time the whole kennel was coughing.

Not dissimilar to children in school or people becoming ill in work places, Kennel Cough is easily spread. It is routinely treated out-patient with cough suppressants if the cough is non-productive. Depending on the veterinarian, an antibiotic of choice, such as Clavamox or Doxycycline may be prescribed. The cough usually runs its course in about 10-14 days, with owners warned to keep dogs away from other dogs when coughing.

But last Spring, many of these dogs routinely treated by their veterinarians for Kennel Cough returned within a couple of days with high fevers, sometimes greater than 105 degrees. They were lethargic, not eating, and were dehydrated from not drinking. Many had labored breathing. The large numbers of sick, coughing dogs was quickly becoming overwhelming for local veterinarians–and even for our large emergency clinic, which typically sees more than 11,000 cats and dogs each year. It soon became apparent that this was something more serious than Kennel Cough.

Canine Influenza Virus (CIV) has been on the scene for about 10 years, and Chicago is no stranger to it. These initial infections started in racing Greyhounds in an outbreak of a strain believed to have originated in horses years before, which is known as the H3N8 strain of the disease. In 2008, Chicago and other Midwestern boarding facilities were hit with cases of this influenza virus. Most of these cases were not severe, and the disease seemed to be able to be contained by having shelters and veterinary hospitals upgrade their disinfection protocols and ventilation systems. Though a vaccine was made available in 2010, many veterinarians did not include this vaccine as part of the required annual vaccination protocol due to the fairly easy containment of the virus and the relatively low mortality rates. So it was felt, after seeing dozens of cases coming to hospitals and day care and boarding facilities, that CIV had raised its ugly little head again.

Day care and boarding facilities in Chicago require that dogs be up to date on vaccines, including the Bordatella vaccination, which is given to prevent Kennel Cough. Because many of these dogs had been thought to have Kennel Cough when they first presented, and knowing that these dogs were up to date on their vaccines but still coming into area hospitals in such waves and with such severity of illness, we started to be concerned about the emergence of a new vaccination-resistant strain.

As the pattern was not typical, some hospitals began performing respiratory panels to try and determine the causative agent of this contagious infectious respiratory disease (CIRD). On April 12, 2015, Cornell University sent out a memo that CIV was in fact the cause, but a new strain, H3N2 (an  Asian flu strain previously seen only in Korea, China, and Thailand) was to blame for the recent severity and numbers of cases of sick dogs. In the end, the vast majority of dogs recovered with supportive care, some treated as out-patients, and some requiring up to 3-to-5 days of hospitalization, especially for those developing severe pneumonia.

Recently, both Merk and Zoetis pharmaceutical companies have each formulated a vaccine against this new CIV H3N2 strain. The vaccine requires a booster about 2-to-3 weeks after the initial vaccine, with follow up yearly boosters. Dog owners should talk to their veterinarians about the best vaccine protocol for their dogs, based upon the dog’s health, lifestyle, and other risk factors. As with any disease, the very young and the very old, as well as immune compromised patients are at highest risk, but this strain seems much more indiscriminate: otherwise healthy dogs became ill and some unfortunately succumbed.

Dogs participating in group activities, such as agility, obedience, or conformation are at high risks for exposure. Boarding facilities, professional handlers, as well as day care facilities and grooming shops, also pose a high risk of possible exposure and the potential for severe economic loss, as complete disinfection is required and quarantine for up to two weeks. The virus also has the capability to be spread by people as the virus can live on clothing for up to 48 hours. Dog show judges should exhibit care and hygiene in the examination of dogs.

Will there be future outbreaks of this H3N2 flu virus? We do not know, though a new map released by Cornell University’s Animal Health Diagnostic Center indicates flu cases on the East and West coasts as well as Illinois’ neighboring states.

Dr. Jerry Klein is an emergency and critical care veterinarian who has been a valued member of the Chicago veterinary community for more than 35 years. In addition to his work as a vet, Dr. Klein is a licensed judge for the AKC and has judged shows both nationally and internationally.

Even the most responsible pet owner can't always protect their pet from a sudden accident or illness. Getting your pet immediate medical attention can be the difference between life and death. Download this e-book to learn more about what to do in an emergency situation.
*Turn off pop-up blocker to download
AKC Privacy Policy
Founded in 1884, the not-for-profit AKC is the recognized and trusted expert in breed, health, and training information for dogs. AKC actively advocates for responsible dog ownership and is dedicated to advancing dog sports.