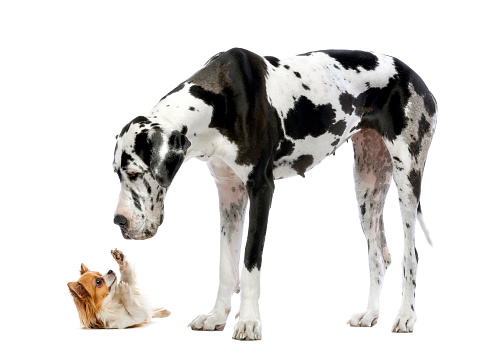 I was sitting in front of a coffee shop drinking an overpriced cappuccino with two friends. At the table next to us sat two women, one who had a Chihuahua with a red leather, rhinestone-studded collar. The dog hovered near her feet and paced back and forth to the extent that his leash would allow, acting in an excited and vigilant manner. The pavement next to the coffee shop had the usual collection of pedestrians, but when a young man wandered by with a large, mature Labrador Retriever, the Chihuahua became frantic—barking and lunging toward the bigger dog. The Lab slowed a bit to look at the tiny, noisy dog and then resumed his leisurely strolling pace as though nothing particularly interesting had happened. One of my friends leaned over to me and said in a low voice, “Another example of a yappy, frenzied small dog and a calm and reserved bigger one. It seems like it’s always the case.”

My friend was expressing a commonly believed stereotype that suggests there are behavioral differences between larger and smaller dogs, with the small dogs being viewed as more excitable and anxious. Some research suggests there may be a bit of truth in the stereotype, with the most recent report coming from a research team headed by Christine Arhant from the University of Veterinary Medicine in Vienna.

In this study, 1,276 surveys were gathered from dog owners. For the purposes of statistical analysis, the dogs were divided by size, arbitrarily classifying as big dogs those who were larger than 44 pounds and as small dogs those who were less than this weight. The data show three major behavioral differences between the small and large dogs whose owners were surveyed:

These results seem to confirm the stereotypes about small dogs, namely that they are less obedient, and more excitable, scrappy, and skittish. However, the Austrian team of researchers next asked the question “Are these differences due to genetic factors or the way that small dogs are treated in comparison with large dogs?”

What Leads to This “Small Dog” Attitude?

The answer showed that the owner’s behavior played an important role in the behavior
differences they found.

Inconsistent training: The first important factor that researchers discovered dealt with the owner’s consistency when interacting with or training their dog. Inconsistent behaviors include not always giving commands in the same way, not maintaining fixed rules for the dog (for example, sometimes punishing a dog for a particular behavior and other times allowing that behavior), or not responding to a specific misbehavior in the same way each time. The data show that the more consistent the owners’ behaviors are, the better the dogs’ obedience behaviors are, regardless of their size. Unfortunately, owners of small dogs were found to be more inconsistent in their interactions with their dogs than owners of large dogs.

Use of punishment:The way in which dog owners train or try to control their dogs’ behavior is another important factor. A number of studies have shown that the use of punishment has negative effects on the dog’s training success and on emotionally based responses, such as anxiety and aggression. Furthermore, the use of punishment in the form of leash jerks, hitting, scolding, grabbing the dog by the scruff of the neck, and so on resulted in more disobedience. Regardless of their size, this study found that dogs who were punished more frequently were more anxious and quarrelsome, but the effect was greater in smaller dogs.

Based on their research, these investigators derived certain recommendations for owners of smaller dogs, specifically, “We conclude that smaller-dog owners could significantly improve obedience in their dogs by being more consistent in interactions and engaging regularly in play and training activities with them. Behavioral problems could be reduced by avoiding habits of punishment that might reinforce fear or fear-related aggression.”

These recommendations might have been of value to the owner of the Chihuahua that day, since her response to her dog’s noisy lunging at the Labrador Retriever was to jerk at the leash and scold the dog with a loud “Stop that!” This is definitely not recommended owner behavior according to this research.