Why Does My Dog Watch TV?

You’re at home sitting on your couch watching your favorite TV show when all of a sudden your dog perks up, does the classic head tilt, and barks at the TV. Is it the sound that’s capturing their attention? Or is it the action on the screen?

It’s probably a little of both.

How Dogs See The TV

The way your dog views what’s on the TV (or computer) screen is slightly different than how you see it.

First, your dog is seeing different colors. Unlike humans, who are trichromatic (meaning we have three kinds of cones in the eye’s retina, allowing us to see more color), dogs are dichromatic and see the world in yellow, brown, and gray tones. Learn more about how dogs see here.

On the left (below) is a regular image. And on the right is how a dog would see that same image.

Left: Human view of a Labrador Retriever sitting in front of a red barn surrounded by plants. Right: The same scene through canine eyes, as interpreted through the Dog Vision Image Processing Tool.

Left: Human view of a blue and red tennis ball sitting in the green grass. Right: The same tennis ball through canine eyes, as interpreted through the Dog Vision Image Processing Tool. This helps show that dogs are better able to distinguish blues than reds.

Color isn’t the only difference in dogs’ vision. In fact, dogs can process visual information faster than humans, according to 2013 study published in Animal Behaviour. Basically, when we see something move (like a tennis ball rolling across the floor), a dog would perceive this same tennis ball to move a little more slowly than we would. This means that dogs can detect quick changes in their visual field, like a squirrel quickly running through the backyard.

Also, your dog can definitely recognize if there’s another dog in the program that you’re watching. According to a 2013 study published in Animal Cognition, dogs are able to visually recognize other dogs. Even using images of different dog breeds didn’t fool the subjects in the study, as they were still able to identify images of their own species despite the breed. 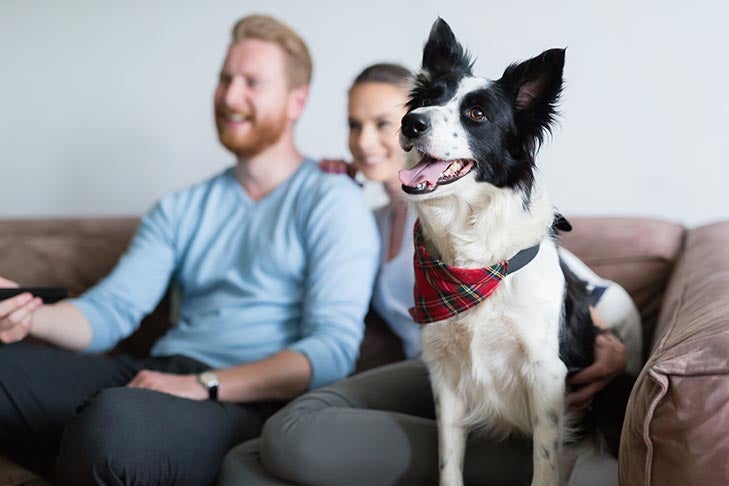 However, if your TV is constantly on, your dog is likely to become desensitized to it. Whether or not your dog enjoys watching the TV or seems interested in it probably has more to do with their personality and breed traits than what’s on the TV. For example, Terriers, who were bred to hunt vermin, may respond to movements on the screen or squeaky noises. On the other hand, a Bloodhound, known for scent-trailing abilities, may not be interested in what’s on the TV because there’s no odor.